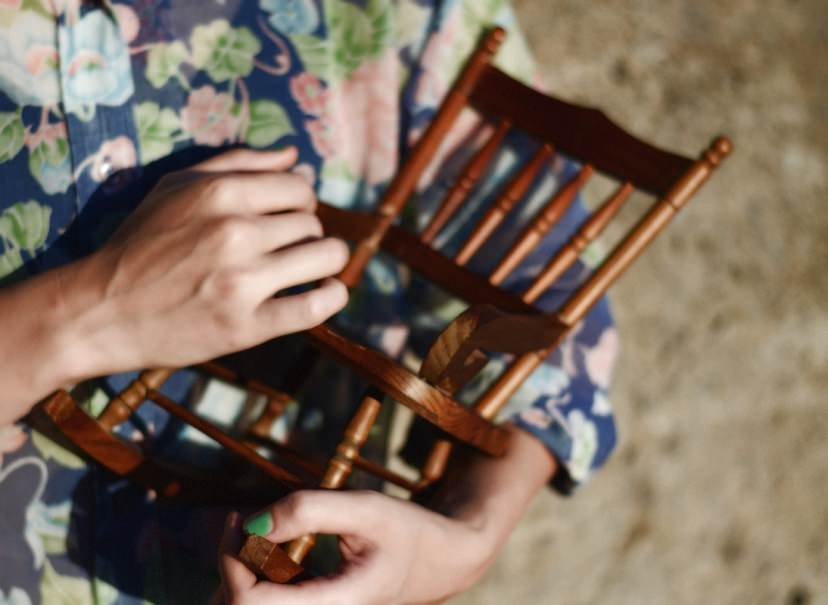 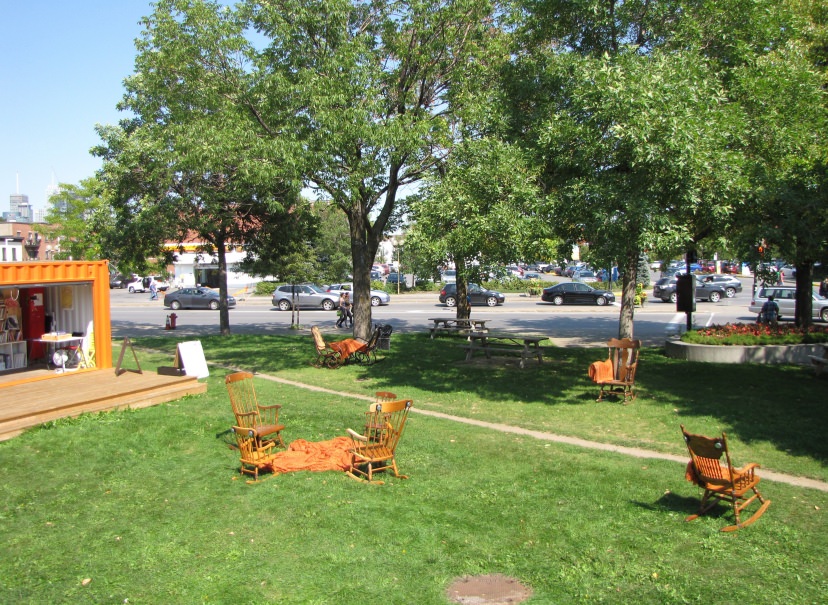 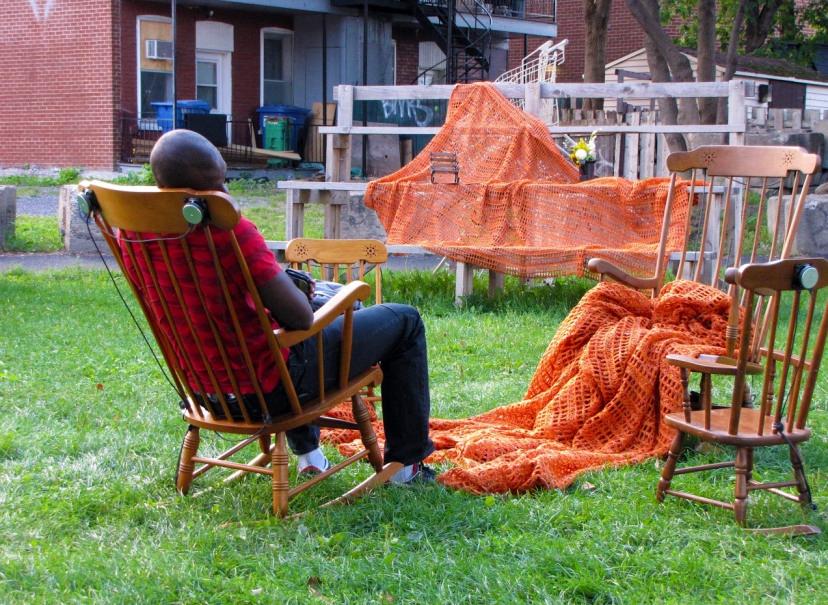 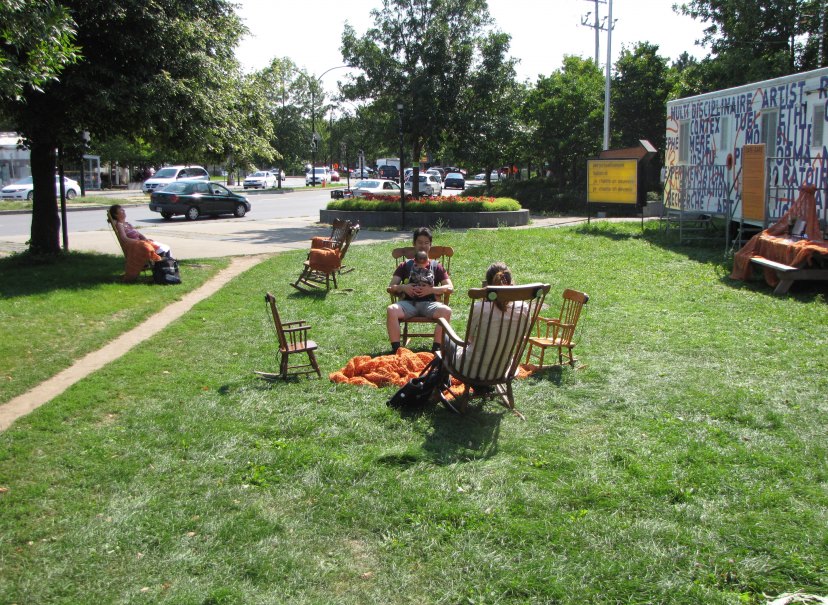 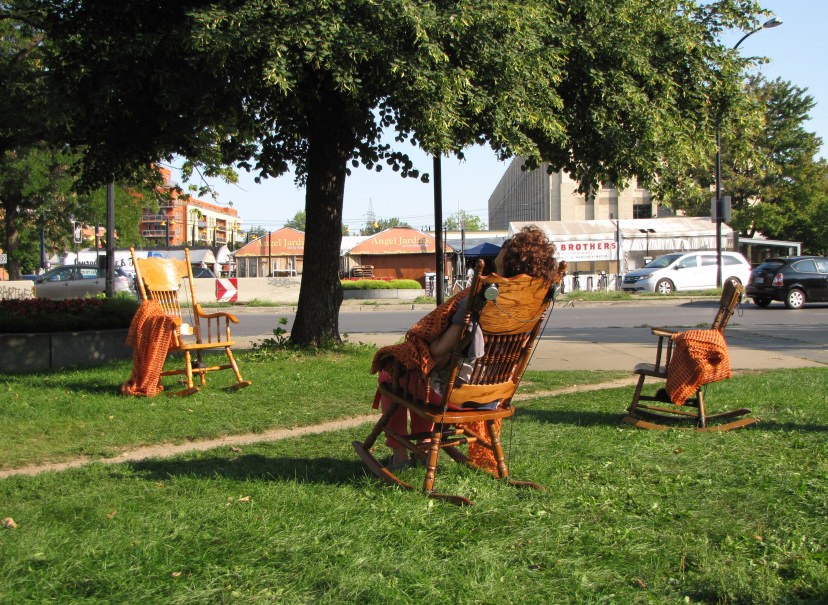 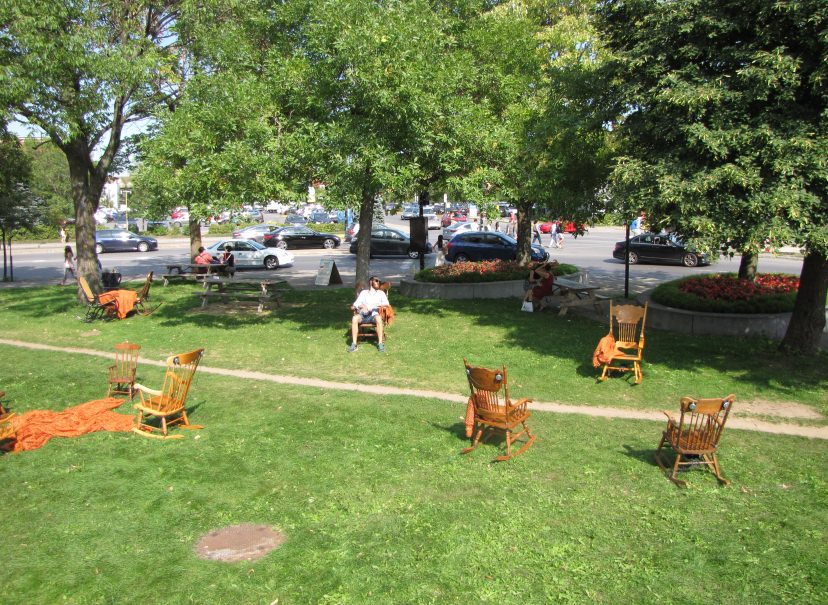 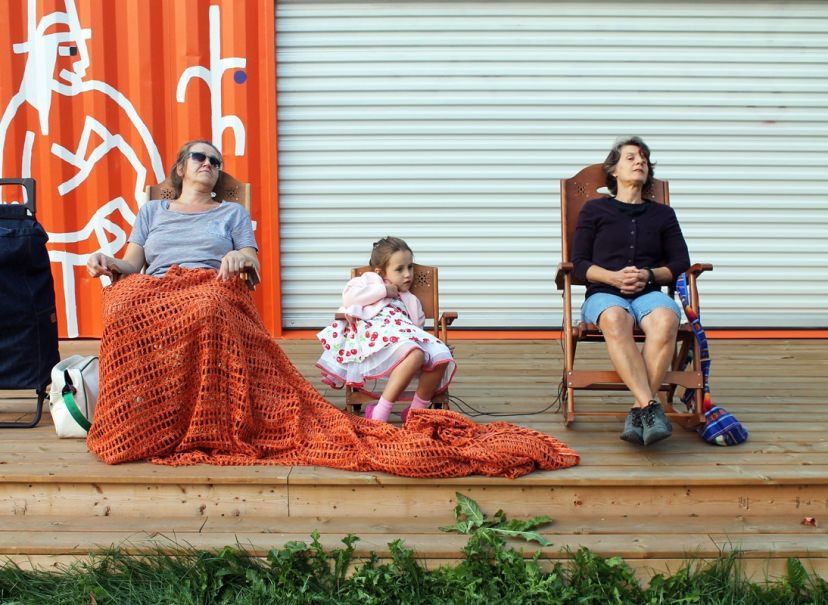 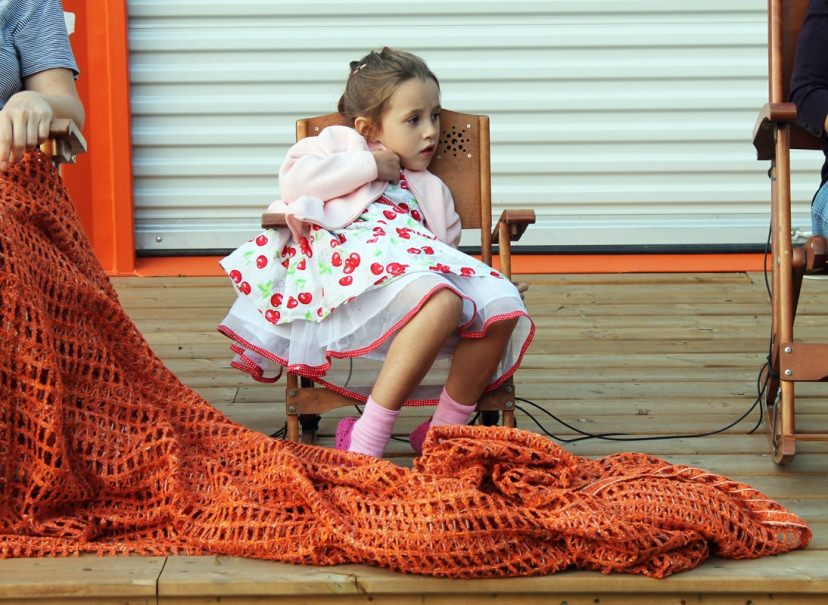 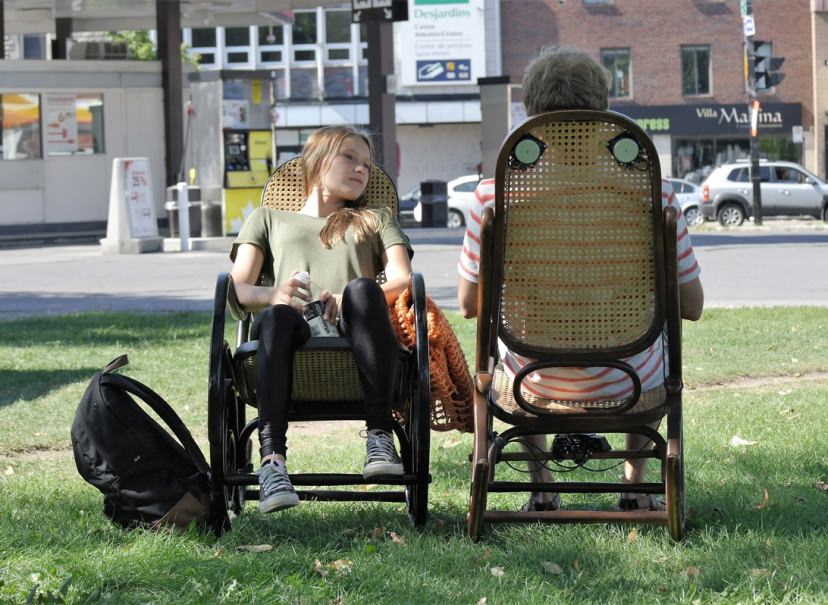 Out of the cradle endlessly rocking,
I sing a reminiscence,
I sing a future.
(inspired by Walt Whitman)

A gentle immersion into the world of lullabies, BERCER LE TEMPS invites to travel aboard a rocking chair. Set up in the heart of the city, the installation welcomes visitors in a suspended time-space outside of the surrounding urban bustle. Feet on the grass, swinging along, everyone can get carried away by the echoes of childhood through songs from all over the world.

A soothing and comforting ritual, a song of love and tenderness, lullabies reassure and guide towards the night. At the threshold of the sleep, they take different shapes, from an ancient melody to a popular song, from nursery rhymes to soft incantations. Lullabies are transmitted in secret and often forgotten. Our collection reveals the treasures of cosmopolitan Montreal gleaned from all over the city, drawing on traditions from Quebec, the first nations, Congo, France, Germany, Iran, Japan, Russia and Venezuela, to name a few.

During the opening hours of the installation, visitors who would like to take part in the collection of lullabies will have the opportunity to do so in a short recording session, sharing a precious intimacy. These songs gain a new life, feeding a living archive and a real collective heritage. Memories become future.

Sarah Dell'Ava develops a multidisciplinary approach of the body through dance, visual arts and singing. Her projects explore the question of the origin of the movement, namely in Dans les plis (2012), Oriri (2013) and Orir (2016). Engaging in a dialogue with the community, her research takes shape through residencies, mediation activities and workshops with intergenerational groups.

In 2016 Sarah takes part in initiatives by Emmanuel Jouthe (Écoute pour voir, Et si on dansait) and prepares together with Ilya Krouglikov an installation on lullabies, all of those promoting art to invigorate human bonds. Most recently, she co-founded Espace Oriri, a place dedicated to spontaneous expression for young and old, where creativity connects interiority and relationship.

Dance dramaturg and former mathematician, llya Krouglikov develops an interdisciplinary approach to performing arts since 2009, when he presents Toujours déjà tombé, a performance straddling between research and creation carried by a cast of artists from theatre, dance, music and circus backgrounds. He extends his practice through numerous workshops and follows a variety of creative processes, from contortion to physical theatre and performance art.

Experienced fencer, he carries the body language over to dance. As a performer, Ilya works with choreographers and visual artists Sarah Dell'Ava (2011, 2013), Bettina Hoffman (2013, 2015) and Pé Vermeersch (2015, Belgium). Together with the choreograph Eduardo Ruiz Vergara he creates the duet Yeux de Cérès presented at the MAI (Montreal, arts interculturels, 2014) and followed by a performance piece developed in residence at Mains d’Œuvres in Paris.

Always seeking to blur the boundaries between fiction and reality, using modes of expression that fit to the occasion, Ilya is now working with Sarah Dell'Ava on an in situ installation with lullabies of the world.

Wolfram Sander is a trained carpenter with a degree in applied theatre studies from Giessen University in Germany. After completing his thesis on vocal strategies in contemporary theatre and performance in 2007, he works as sound and light designer, performer, director, musician and technical director. In 2008, he assists Heiner Goebbels for the staged concert I went to the house but did not enter featuring the renowned Hilliard Ensemble. Since then, he regularly collaborates with various artists and collectives, namely with Rimini Protokoll, touring through Europe,Asia and Northern America. He also participates in creation and realisation of projects in public space, such as Emupong, an interactive installation with a ping-pong table set up in a train station.

Dedicated singer, Wolfram sang in several choirs directed by eminent chefs (namely Kent Nagano and Eliahu Inba) in Berlin, Montreal, New York and London. As a musician and performer, he recently appeared in LIEBE directed by Daniel Kötter at the MärzMusik Festival in Berlin (2016). It is Wolfram’s third solo on stage after his own SirenSongs (2008-10) and Wenn ich einmal groß bin… (2010), creations at the crossroads of concert, music theatre, performance and installation.

Since 2012, after collaborating with the Ruhrtriennale, a significant part of his professional activity is devoted to artistic production management, namely at the international theatre festival Theaterformen in Hanover and Brunswick.