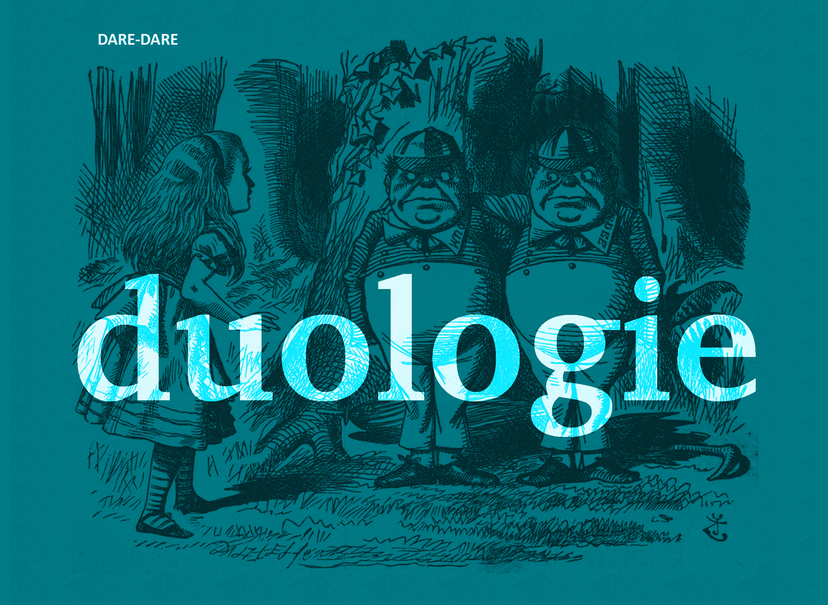 In order to carry out its artistic program 2020-2021, DARE-DARE offered a mode of action by creating duos rather than following the traditional "call for projects".

DUOLOGIE consists in forming original duos, to generate by this encounter and by the richness of the meeting the sensitivity and the singularity of the research approaches.

Our intention is clear: to make explosive and overwhelming cocktails of beauty, finesse and intensity.

Our mission is to explore, question and develop the practices, spaces and modes of dissemination of current art and participate in its democratization and accessibility. Designed by the committee made up of Christian Bujold, Érick d'Orion, Martin Dufrasne, Stéphane Gilot, Julie Isabelle Laurin and Julie Lequin, DUOLOGIE takes place over two consecutive years. The second cycle consists of the following :

Amber Berson is a writer, curator, doctoral student and doctoral researcher at Queen’s University on the theme of the culture of feminist artist-run centers and utopian thought. She is interested in utopian feminist movements and socialist imaginaries, both in their origins and heritage, affecting collective self-management, self-determination, childcare and pay equity, as well as anti-racist practices. She was recently curator of Trailmix (2014); * ~ _: * JENNIFER JENNIFER X * :. ~ (2013); The Annual Arts Trustees Race (2013); and The Wild Bush Residency (2012 -). She is a member of the editorial board of .dpi, a feminist digital art and culture journal, and recently organized the Montreal edition of the Art + Feminism Wikipedia project. His articles have appeared in Canadian Art, Esse, Fuse Magazine and C Magazine and St Andrews Journal of History and Museum Studies.

Lynda Gaudreau's work evolves in the form of series declined through creation, research and curating activities. Her artistic practice is anchored in choreographic creation and in a reflection on dance, while engaging in an assiduous dialogue with architecture, visual arts, cinema and performance. As an artist and curator, Gaudreau notably presented OUT OF GRACE at Leonard & Bina Ellen Gallery (2010), a project bringing together five visual artists, inviting them to think of the exhibition space as a choreographic system. Her most recent series, titled Out, deals with what escapes any system: the "misfit", the margin and the aesthetic, political and social eccentricity. Lynda Gaudreau has collaborated with many places of the contemporary scene in Germany, Austria, Belgium, Brazil, Canada, Croatia, Denmark, Spain, France, Israel, Italy, United Kingdom, in Slovenia and Switzerland.

Michelle Lacombe lives and works in Montreal. Since obtaining her BFA from Concordia University in 2006, she has developed a practice rooted in performance, branding and conceptual body art. Using simple gestures and modest materials, her work deepen the visual narratives and cultural constructs that surround the body, her body, cisgender white and feminine. Recipient of the Plein Sud grant in 2015, her work has been presented in Canada and internationally in the context of performance events, exhibitions and conferences. Along with her artistic practice, she is engaged in supporting complex and undisciplined forms of artistic practice. She is the director of VIVA! Art Action, an international performance biennial.

Didier Morelli, who was born and raised in Montreal, is an interdisciplinary artist who combines practice and research from didactic and performative explorations. Morelli is a doctoral candidate in the Department of Performance Studies at Northwestern University in Chicago, Illinois. His action art practice involves actions focused on endurance, context and relation. His studio work, which incorporates elements of installation, drawing, photography and video, has been featured in solo exhibitions (Katherine Mulherin Gallery, Toronto, 2012; the Defibrilator Performance Art Gallery, Chicago, 2015; SIGHTINGS at the Leonard & Bina Ellen Gallery, Montreal, 2016), and collectives (the Audain Gallery, Vancouver, 2015). He presented performances at the 7a * 11d International Festival of Performance Art, Toronto, 2014; at the Buenos Aires Performance Art Biennial, Buenos Aires, 2017; and at ViVA Art Action, Montreal, 2017. His writing has appeared in Canadian Theater Review, C Magazine and esse arts + opinions.

Sylvie Tourangeau is considered a pioneer of performance art in Canada. Since 1978, her actions, collective workshops and individual coaching have created an active space for experimentation with performative consciousness through minimal actions that enhance the quality of presence, sustain intensity and personify the bond with the viewer. Performances, relational art, furtive practices and circumstantial rituals are practices in which she invests herself. She has also published artist books and over sixty articles on a large body of performance. With the TouVA collective, in 2017 she published the bilingual book Le 7e Sens about action art. She founded the interdisciplinary training center Espace Sylvie Tourangeau (Joliette 1995 to 2007) and developed a place of artist residencies, at the heart of Quebec's built heritage, La maison aux volets jaunes (2015-2017) and La nouvelle maison jaune (2018-) dedicated to performing arts.

Manon Tourigny is an art historian and author. She is interested in video, media arts, photography, performance and artistic practices that are part of public space. The collaborative aspect is essential in her practice as an author and curator. In all stages of a project (research, writing, presentation), she makes sure to be part of a discussion with the artist. She has written numerous articles and texts for specialized magazines (Ciné bubbles, CV photo, esse arts + opinions, Espace et Inter), in addition to writing pamphlets for various organizations (artist-run centers, exhibition centers and museums). She is part of the collective of curators N. & M., which centers its research on collaborations, artistic processes and contamination between artists, works and the very role of the curator.

With a master's degree in urban studies (INRS) and a doctorate in art history (UdeM), Josianne Poirier is interested in the relationship between art, culture and urban space, through themes such as city lighting, public art and municipal cultural policies. Her doctoral thesis, entitled Montréal fantasmagorique : illuminations monumentales et récits de ville au début du XXIe siècle, takes a critical look at the denial of conflict and the reification of techniques that are expressed in three projects: the lighting plan of Quartier des spectacles, Cité Mémoire architectural video projection route and the lighting of the Jacques-Cartier Bridge, Connexions vivantes. For this research, she won the 2018 Jean-Pierre-Collin Prize, awarded by the Villes Régions Monde network to the best thesis in the field of urban studies.