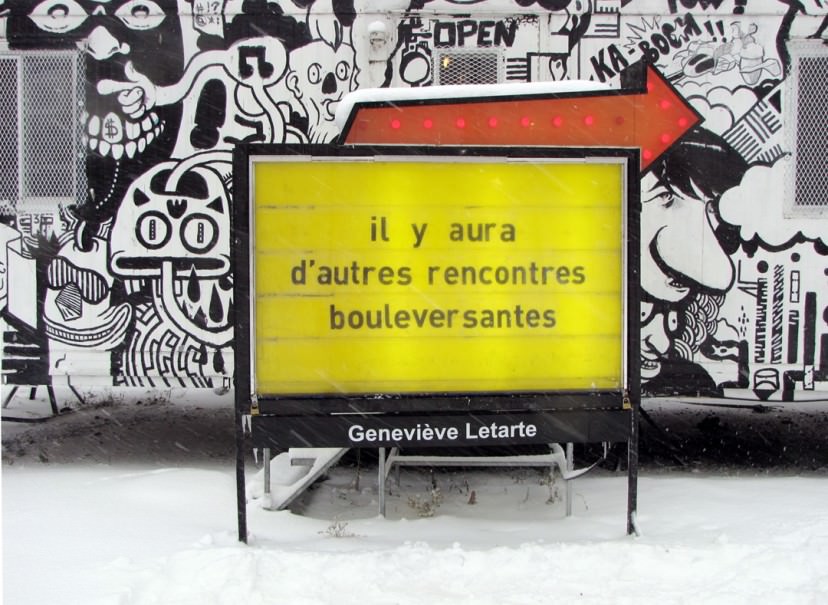 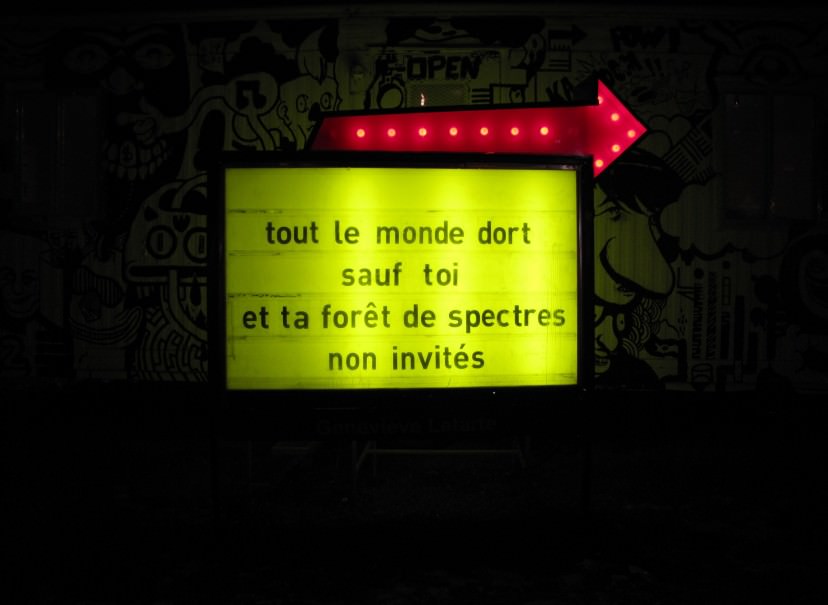 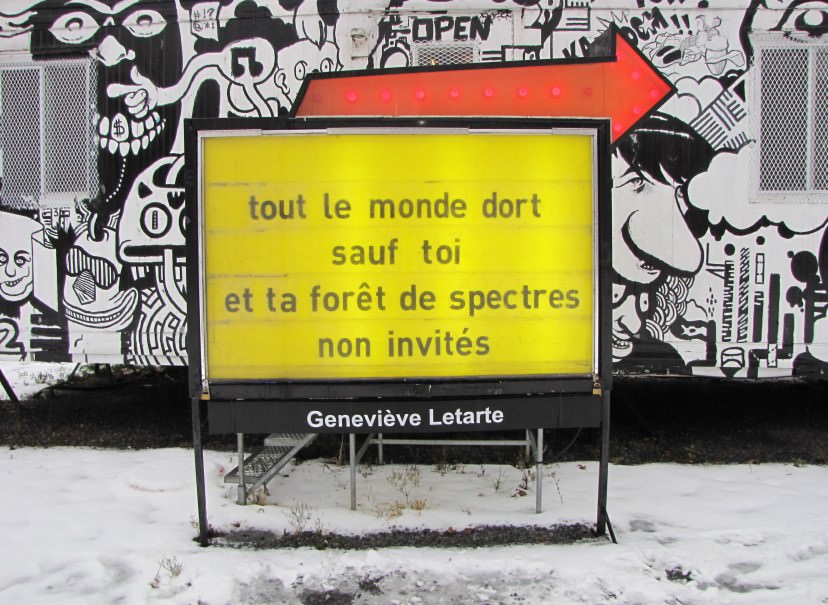 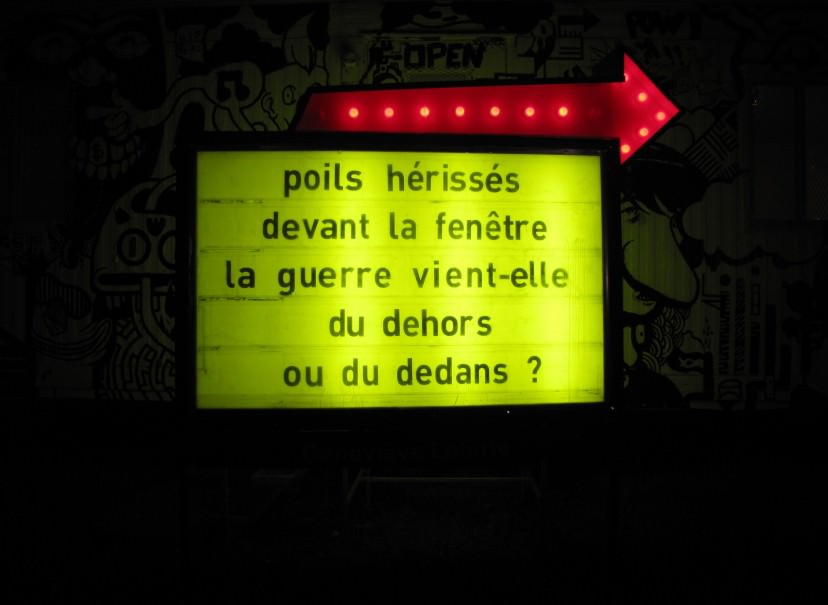 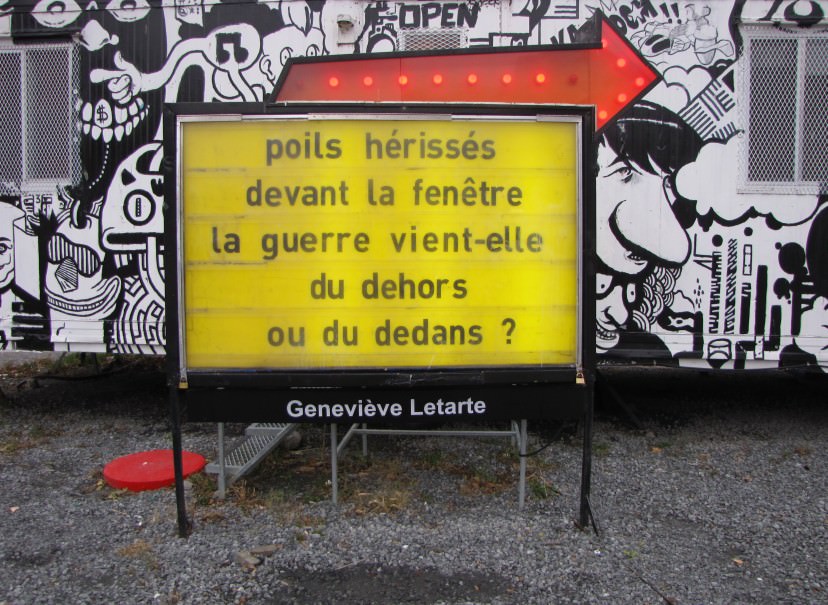 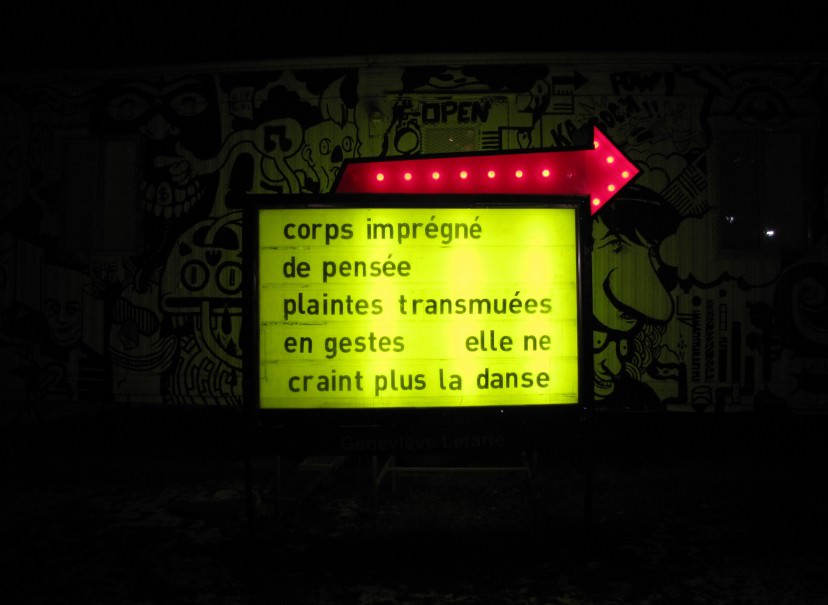 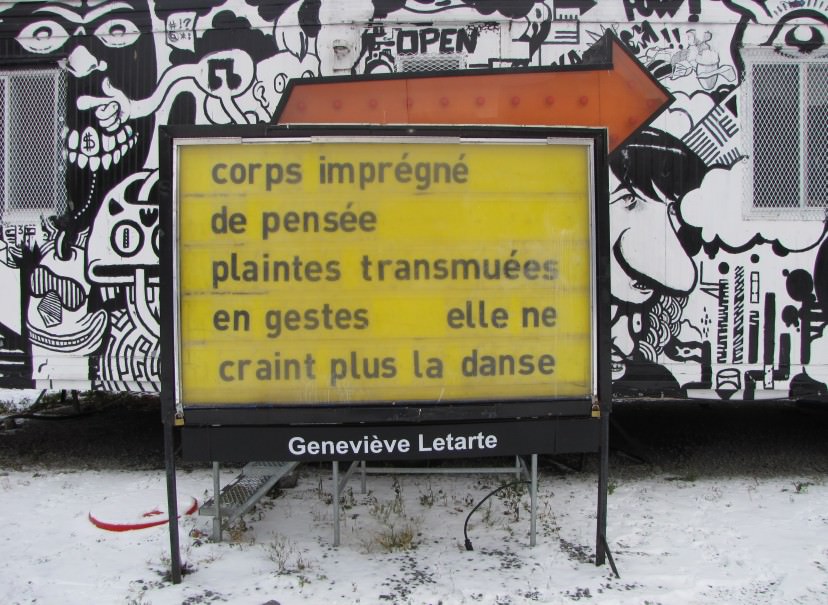 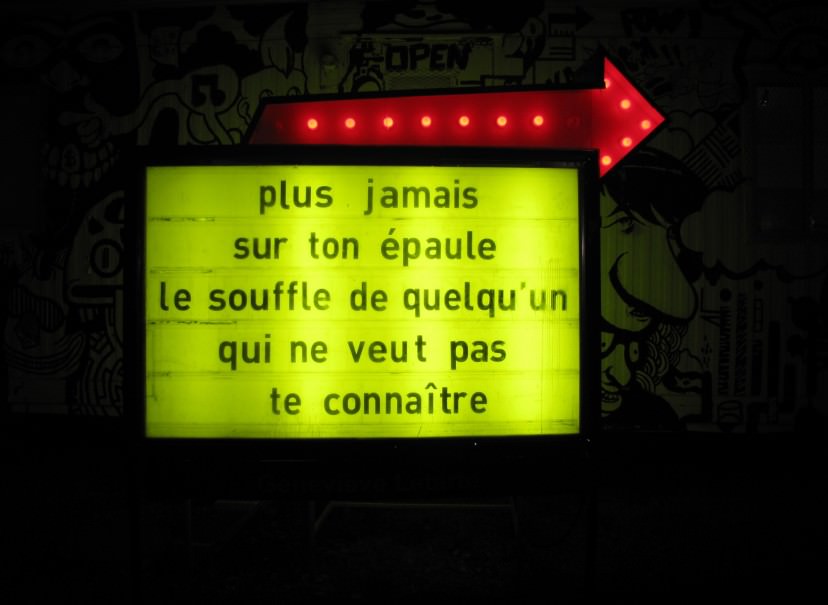 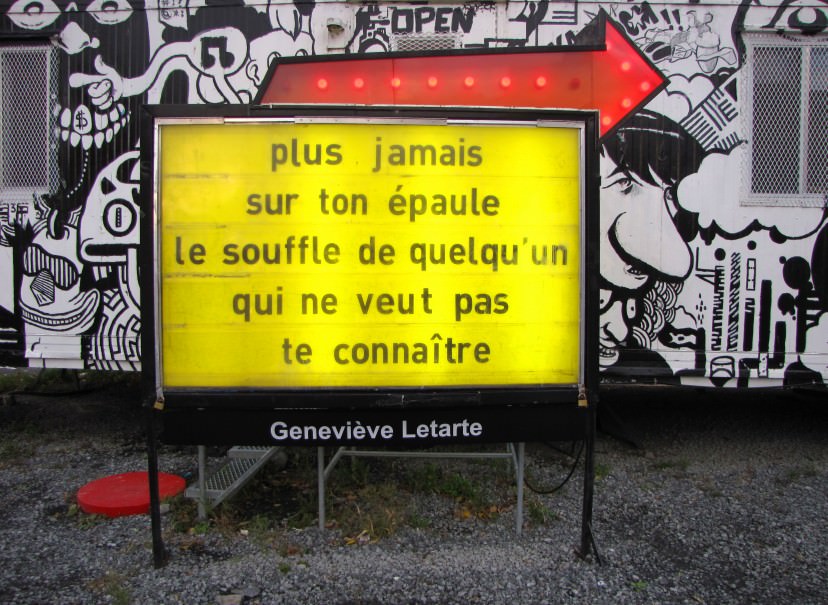 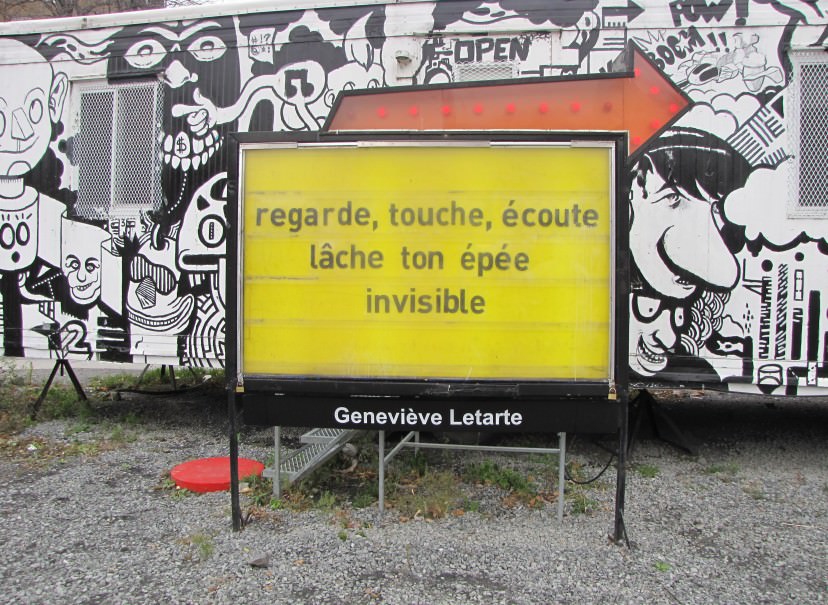 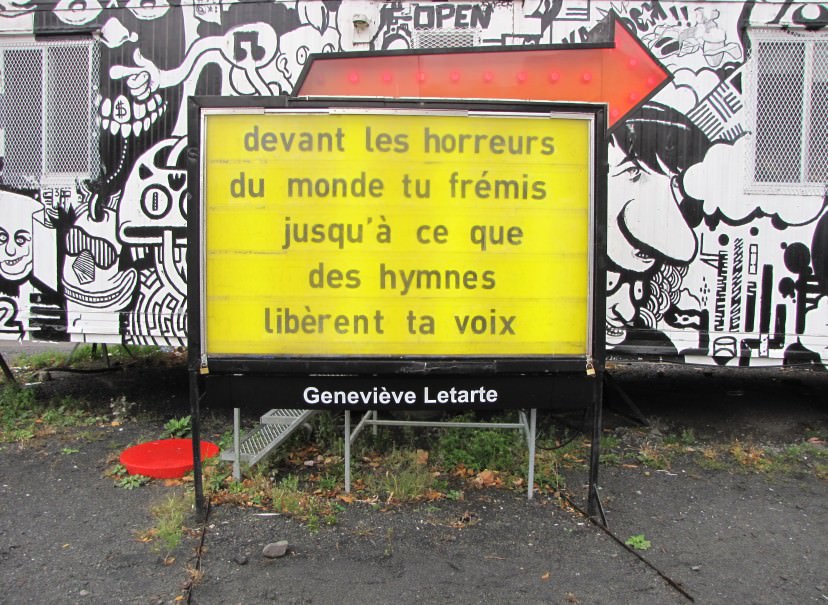 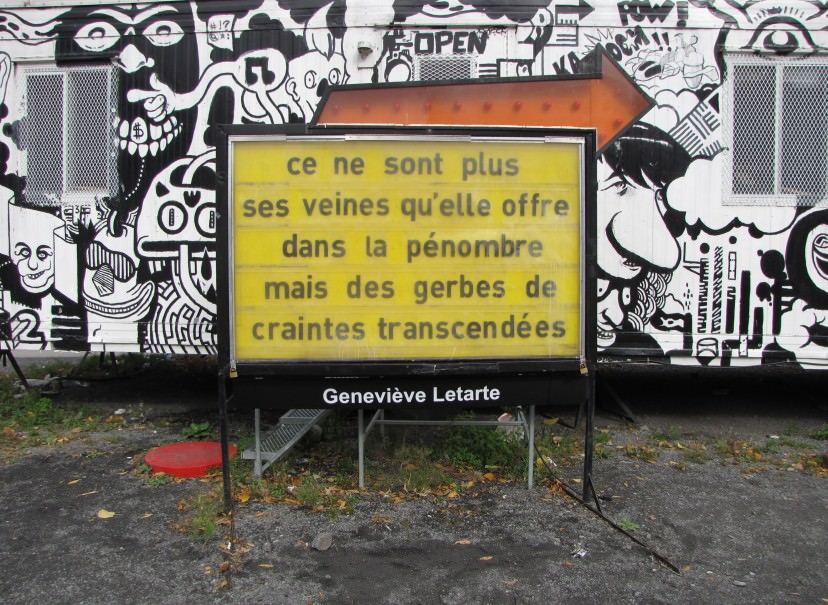 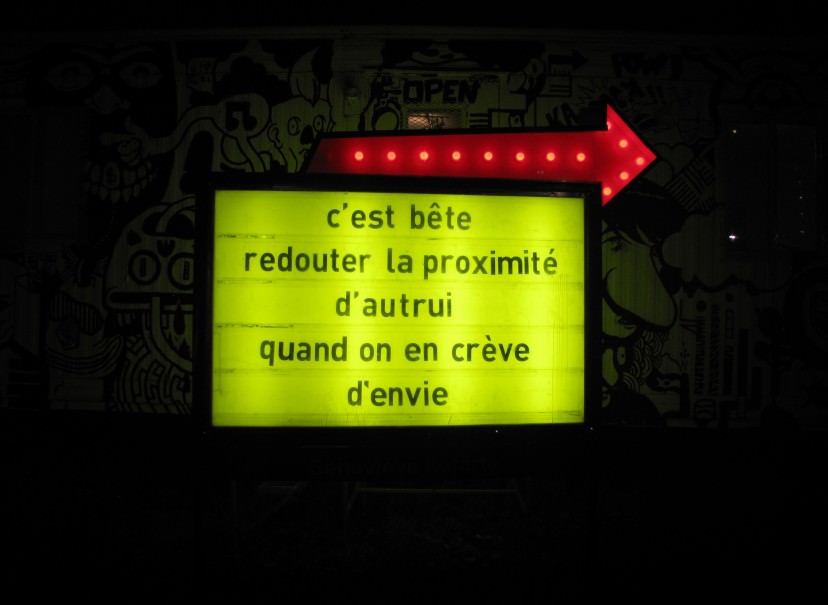 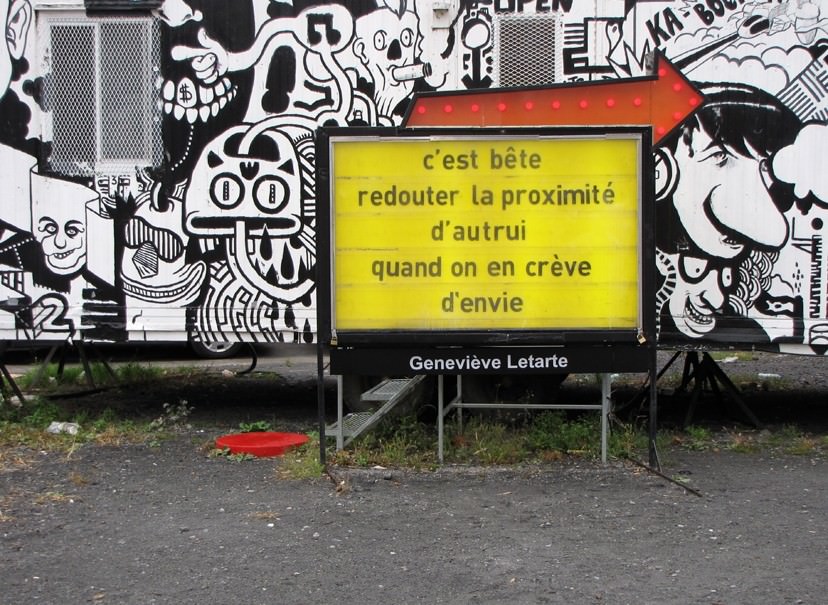 "As I reviewed your call for proposals, I wanted to write a series of mini-poems inspired by the theme of fear, a banal topic if any but very present in our lives. One day I heard on the radio the artist Carole Laure say she was afraid of everything. This reassured me: I was not the only one!

I also find the idea very inspiring to disseminate poems on a wallboard installed in a public place. I have always believed that poetry, despite the intimate character that lends it and unfortunately often confidential aspects of its distribution, is in fact closely linked to the public space and the community.

Having participated in many poetry events, I have often seen how poetry is unifying, allows to share on both an immediate and a long term matter. As a spectator, I am always delighted to see poetry interfere in public places: poems displayed in the bus or subway of Montreal, readings taking place in unusual space such as parks or shop windows, etc.

The following unpublished poems that I propose here takes at once: pagan haiku, intimate slogan and existential ads. In short, a single word that wants to collectively as the famous "« Je est un autre " from Rimbaud. In fact, I consider the poems as states of being of fear, when it is felt physically as well as morally or metaphysically. I hope that these texts, in whole or in part, arouse the interest of spectators on the bright board in front of DARE-DARE."

Geneviève Letarte is on the editorial board of the journal l’Inconvénient, where she writes a column, and contributed to various literary magazines in Quebec, France and the United States. She has twice been a finalist for the Governor General with his translations of the works of Mavis Gallant: Le Weekend en Bourgogne (The Allusifs, 2010) and Rencontres fortuites  (with Alison Strayer The Allusifs, 2009)

She occasionally teaches creative writing at the university, conducts poetry workshops in schools, participated as a writer-board the Spoken Word program at the Banff Centre (Alberta). She was greeted as a writer in residence at Yaddo (NY), the Banff Centre (Alberta) and Quebec Studio in Paris. She participated in many cultural events in Quebec and in Canada, France, Mexico, Cuba and Armenia.