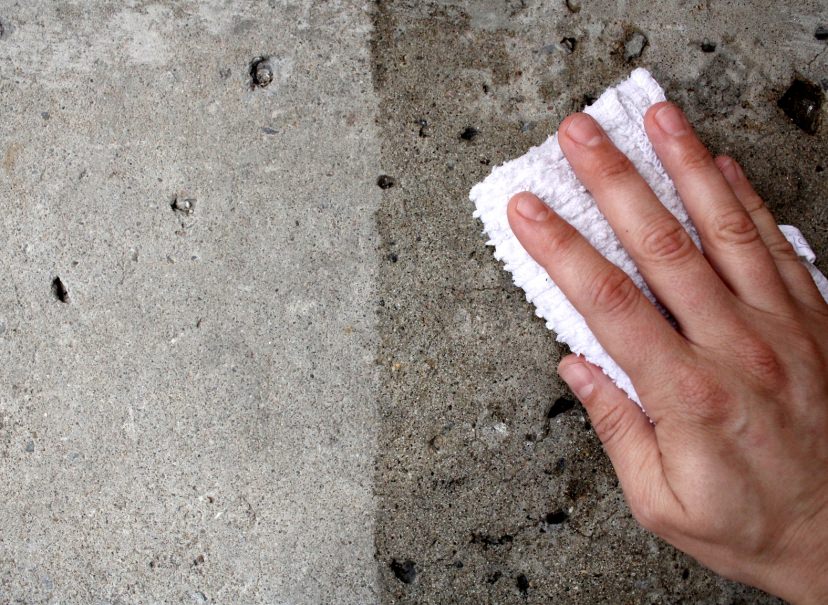 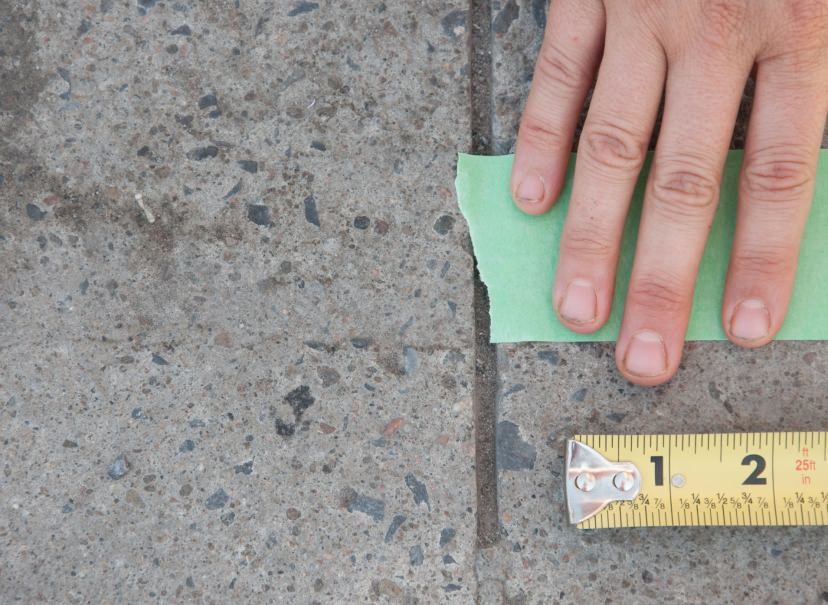 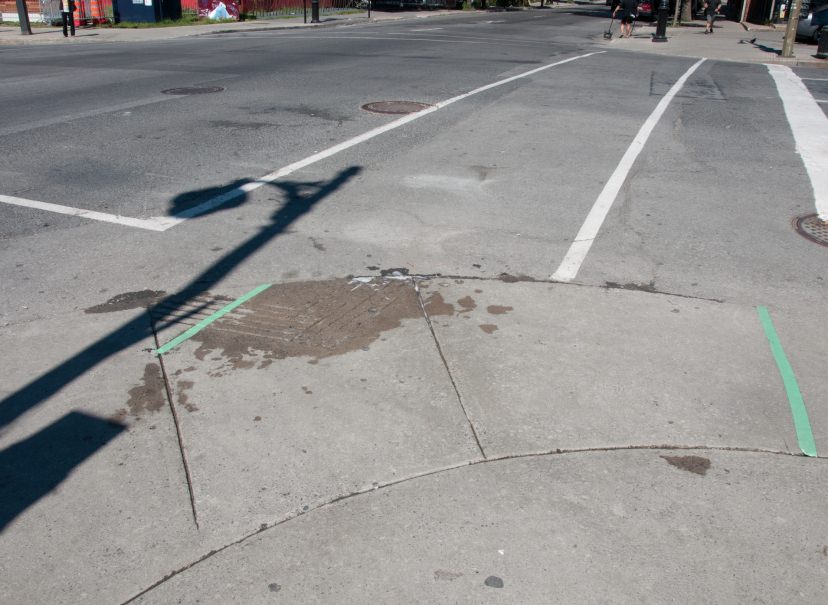 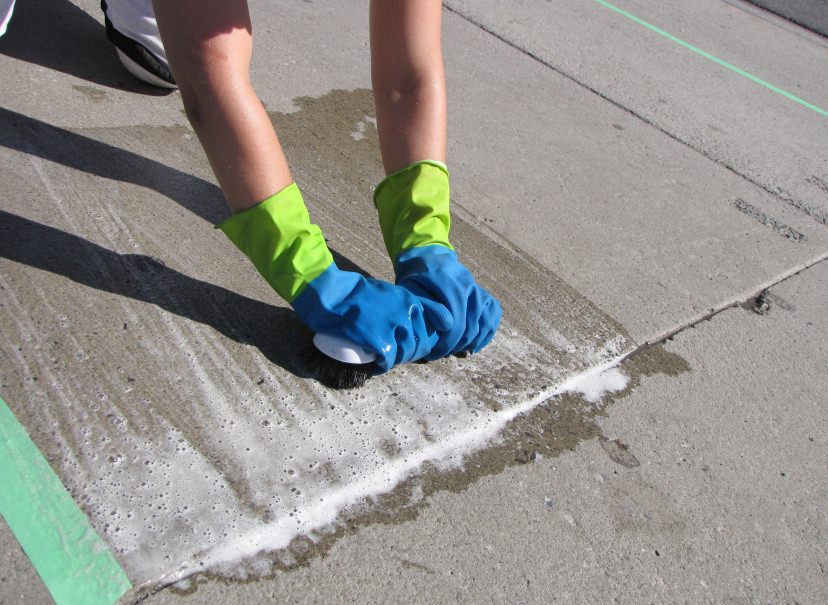 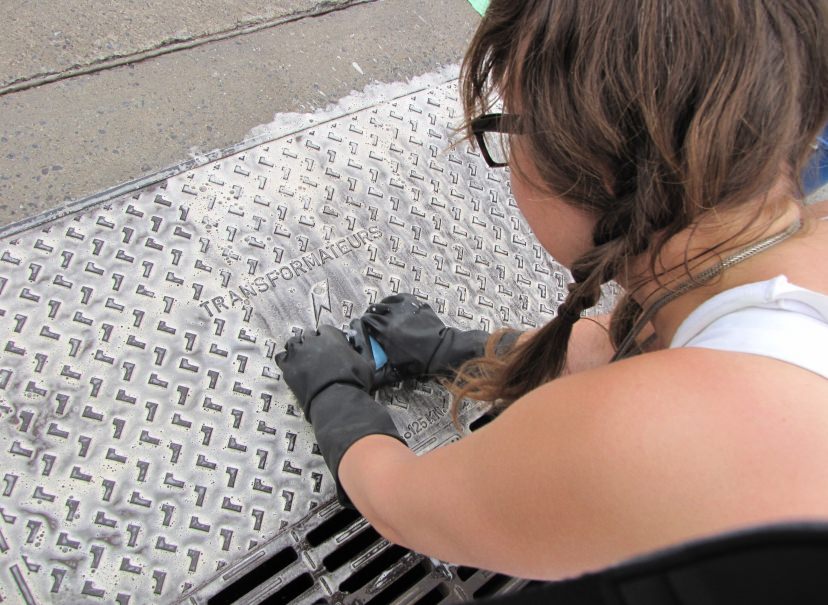 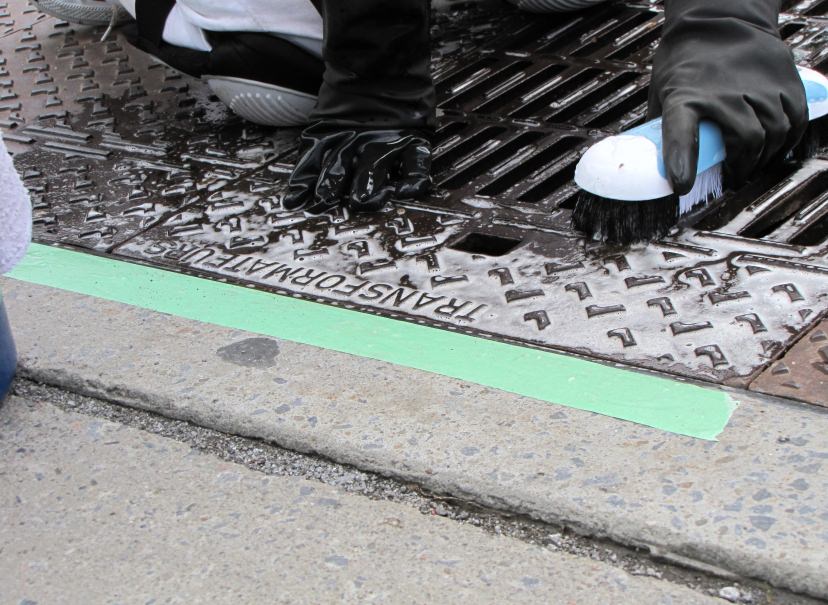 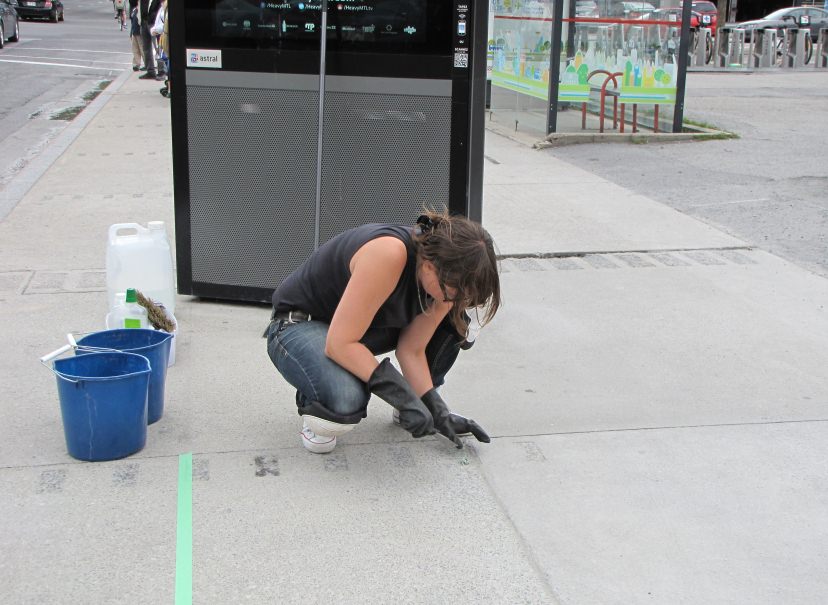 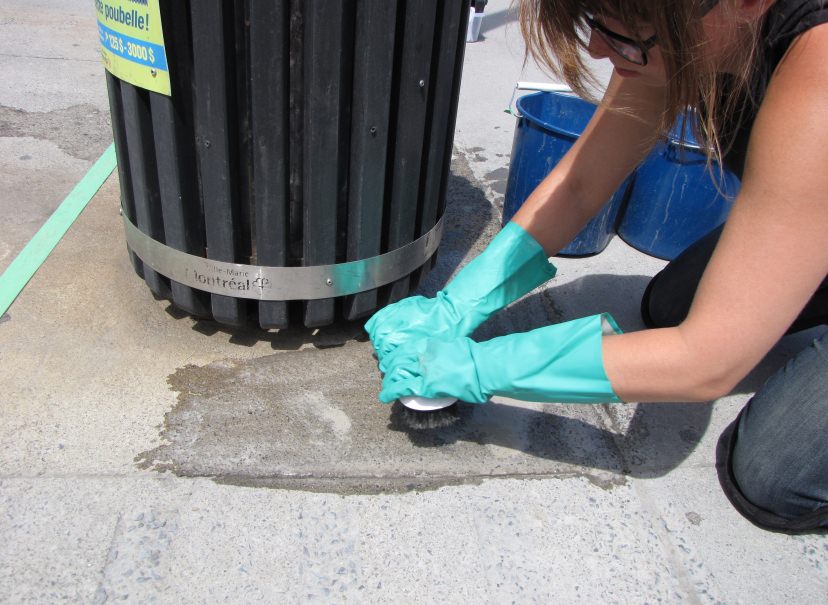 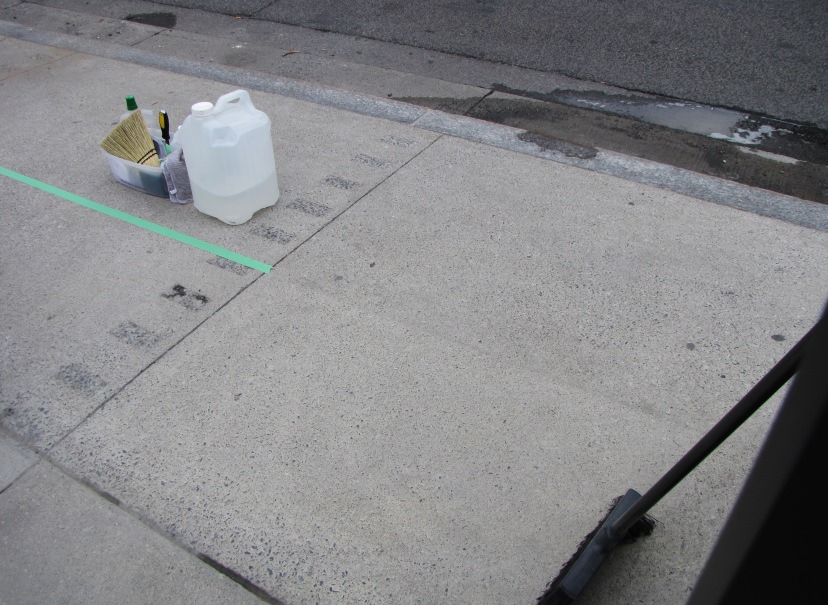 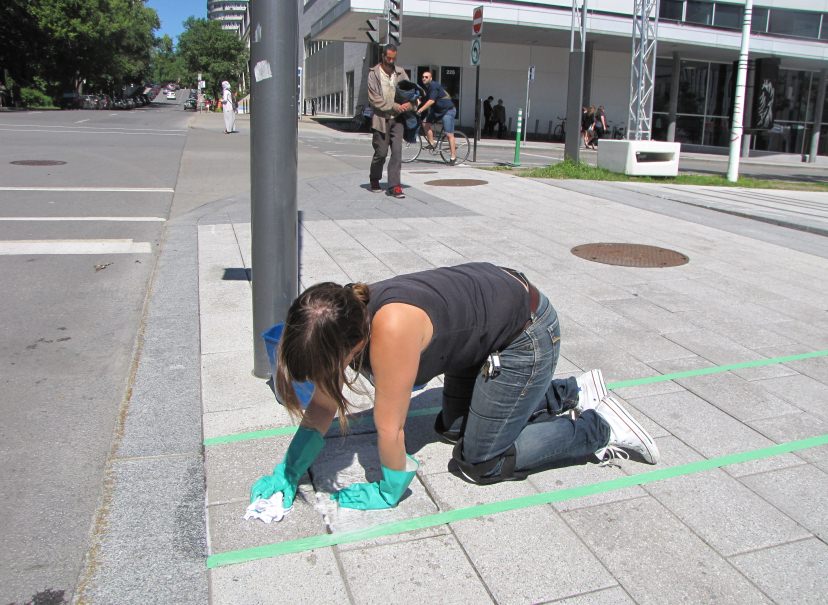 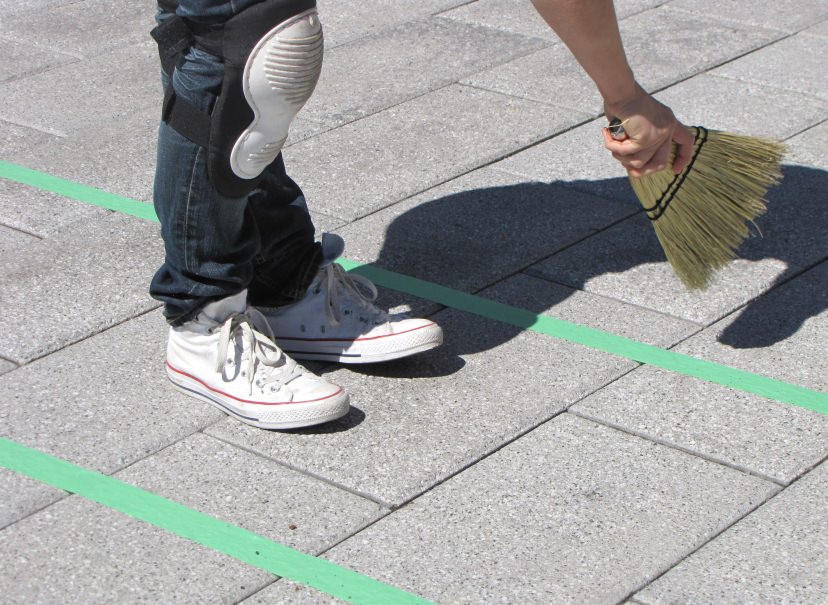 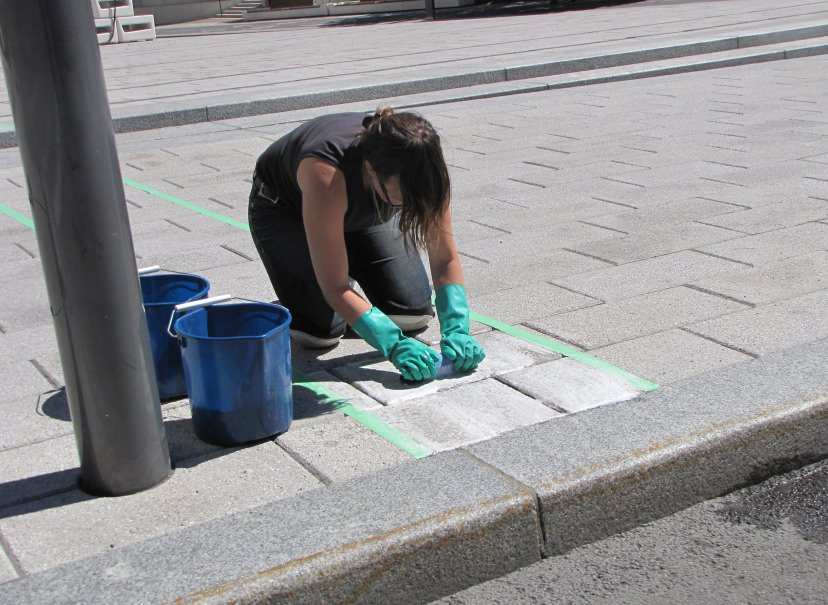 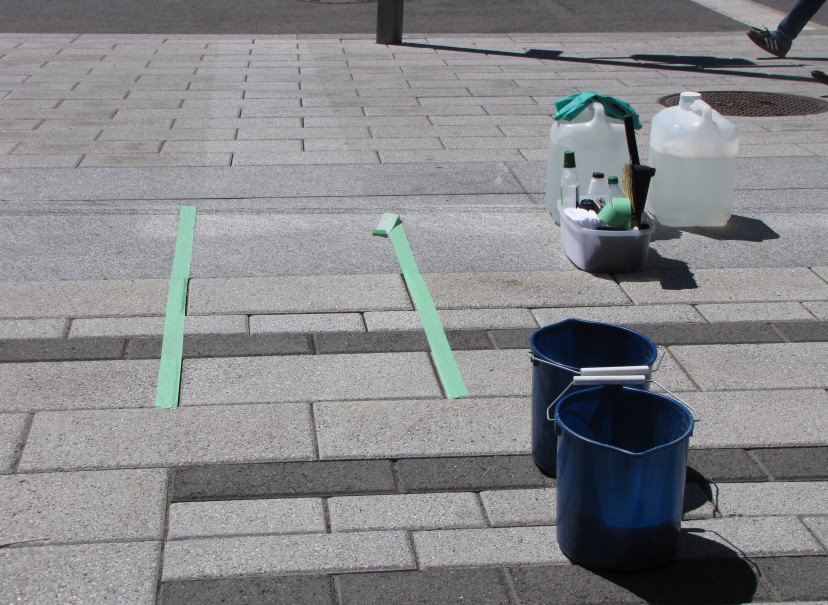 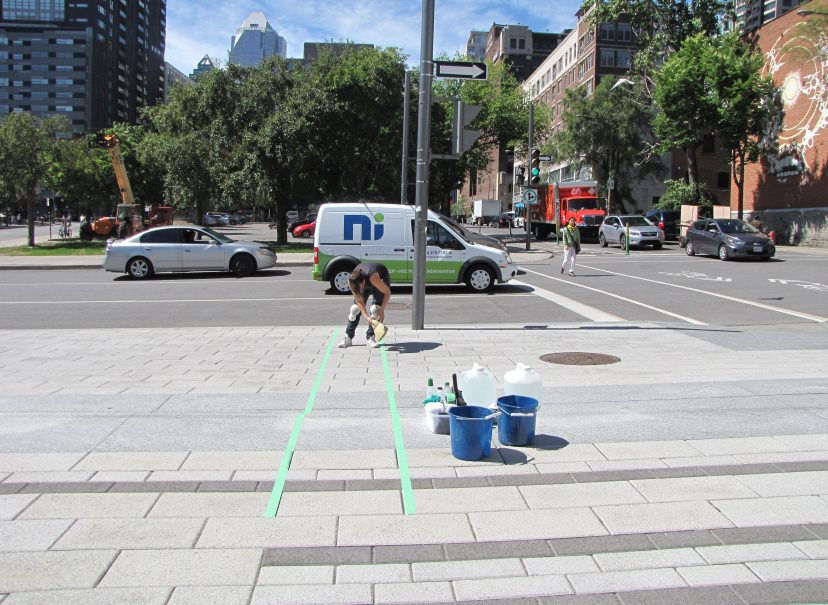 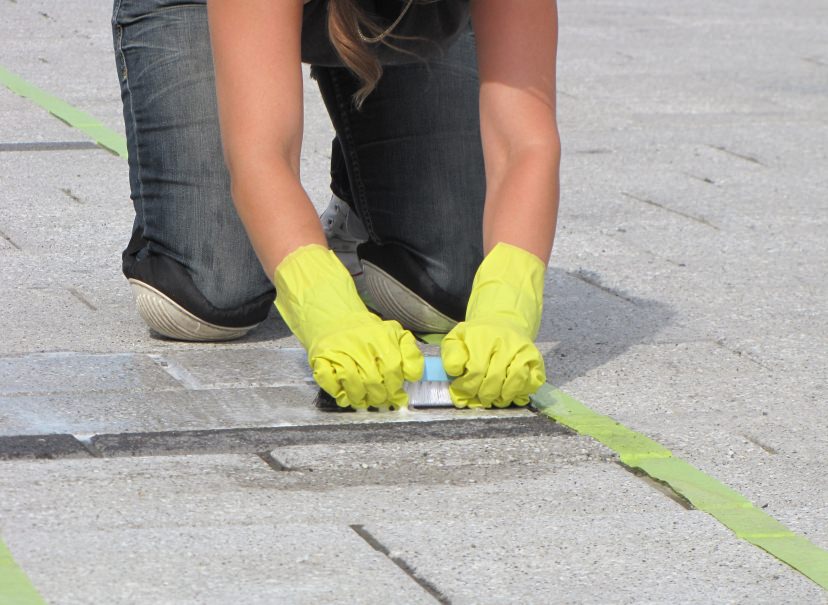 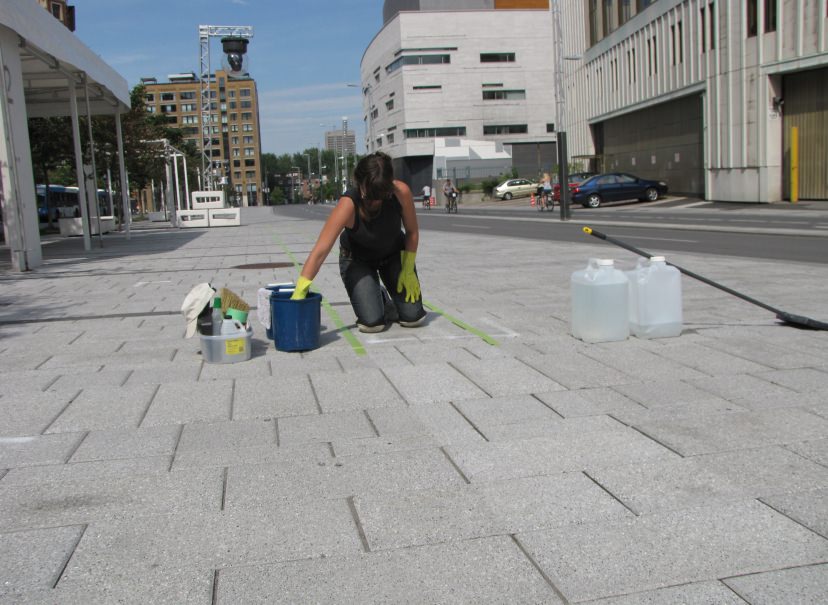 For DARE-DARE’s Field 1 – Intervention In Public Space, Kandis Friesen proposed the project maintenance/d'entretien, a continuation of a series of drawing-based interventions in which she cleans public and arts-related spaces.

Viewing the accumulation of dirt as a sort of collective drawing process, the work affirms this collaborative drawing through the act of erasing (cleaning) it, bringing questions of labour, collectivity, property, use, and occupation of public space to the surface.

For the duration of two weeks, the artist will be working out of DARE-DARE for a daily cleaning 'shift', essentially acting as DARE-DARE's public janitor. Wearing a nondescript work uniform, she will tidy, clean, and scrub the sidewalk area (including public infrastructures) located in two different areas – the first will be the sidewalk on St-Laurent at the corner of de Maisonneuve, and the second will be at the “promenade des Artistes” of the Quartier des spectacles.

While expected acts of public cleaning (garbage pick-up, cleaning the metro) are often invisible, ignored or disrespected, a public act of maintenance 'performed' by an artist focuses the conversation on the labour and actions of both cleaning and art making.

Viewed within Friesen's larger practice of drawing as an expanded form, the piece also calls on her past and current work dealing with collaboration, contexts of labour, and the relationship between mark-making and collective archival forms.

Marginalized ways of occupying public space, such as sex work, panhandling, and 'loitering', are often criminalized and associated with dirt and dirtiness. The term 'cleaning-up the streets' is frequently heard during periods of gentrification or new development.

The work speaks to many of these issues and ideas around the occupation of public space, definitions of art, and ideas of cleanliness. During the scheduled daily work, the artist will interact with the passing public, (around 15 000 people transit around DARE-DARE’s location daily) leading to a dialogue about the roles and definitions of art, as well as the ways in which we occupy and care for public spaces, ourselves, and each other.

In the context of the intentional development of the area, with its many large-scale festivals, the work also contrasts an attractive or sleek portrayal of the arts, dealing directly with manual labour and the accumulation of dirt brought by both the festivals and the daily life of the quartier.

Born and raised in the prairies, Kandis Friesen is an artist and cultural worker based in Montreal. Working in video, performance, drawing, and installation, her practice looks at sites of national and cultural identity, contexts of labour and production, and the role of document and archive in constructions of public memory. Her work has been shown locally and internationally at various venues such as La Centrale, SKOL, and articule in Montreal, a recent artist project in FUSE Magazine, and recent screenings at the Athens Video Art Festival (Greece), THEOFFCENTER (San Francisco), WNDX (Winnipeg), and OK.QUOI?! (Sackville), and her collaborative video Tape #158: Document 2B recently won the 2012 Images Festival's Steamwhistle Homebrew Award.