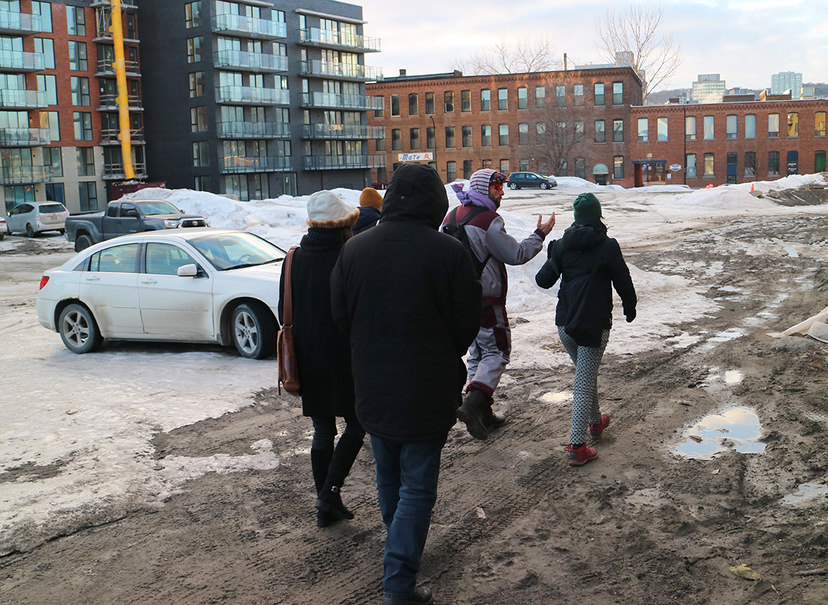 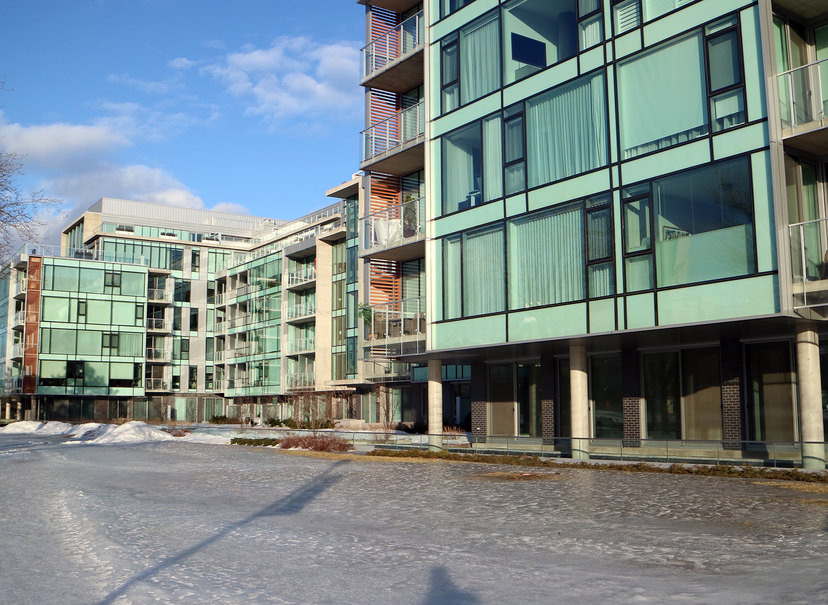 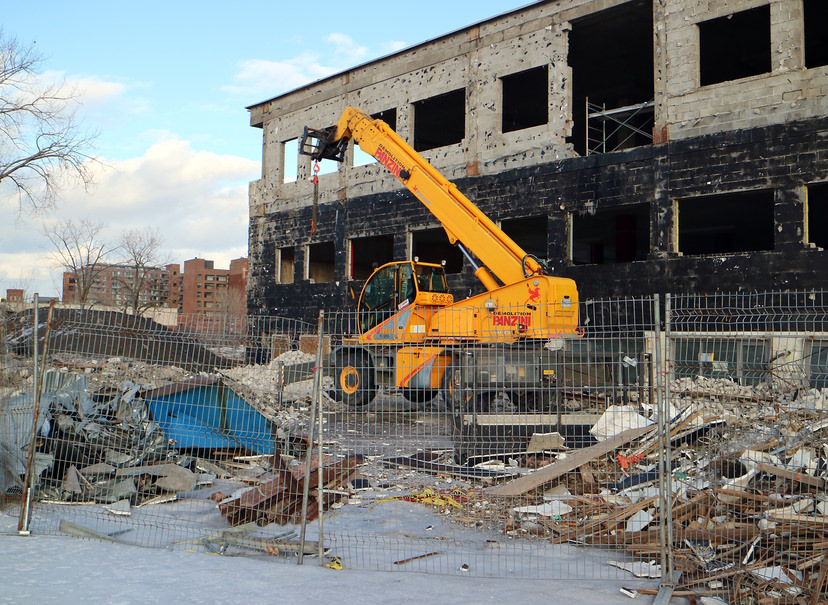 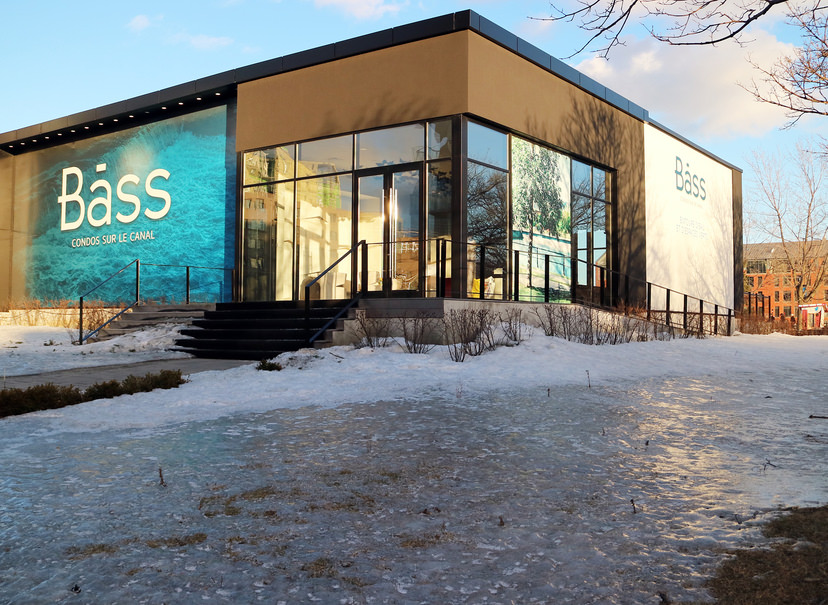 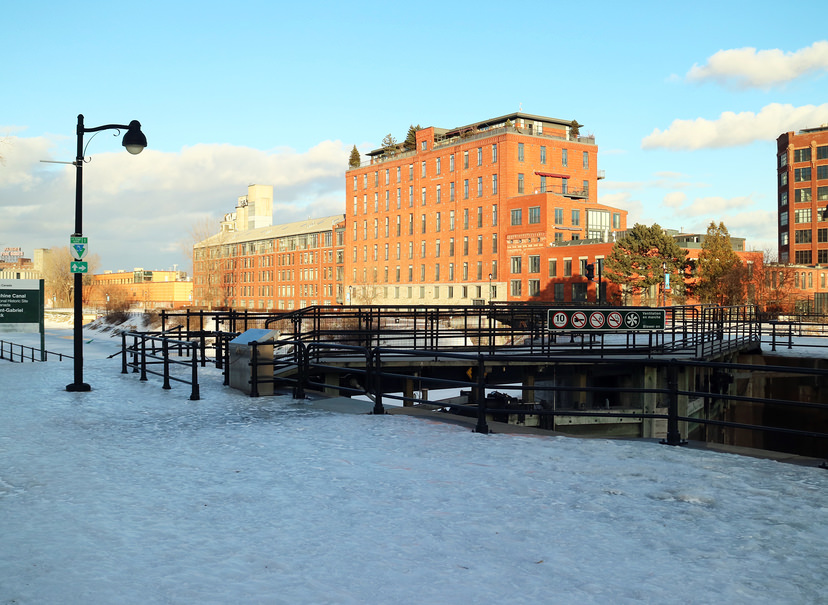 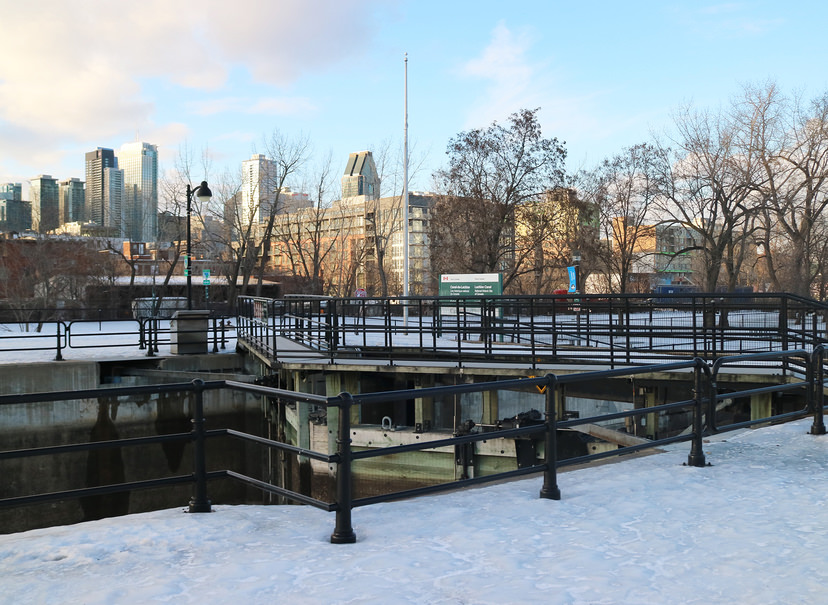 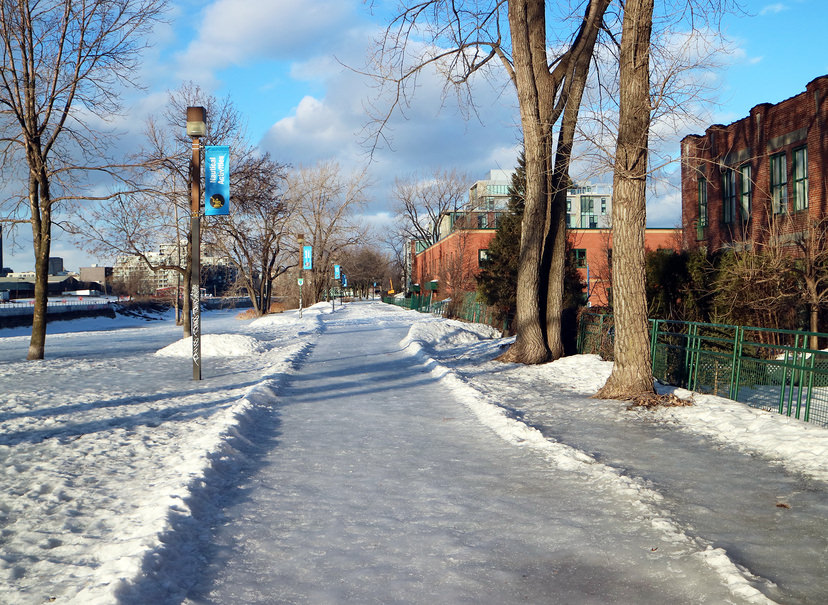 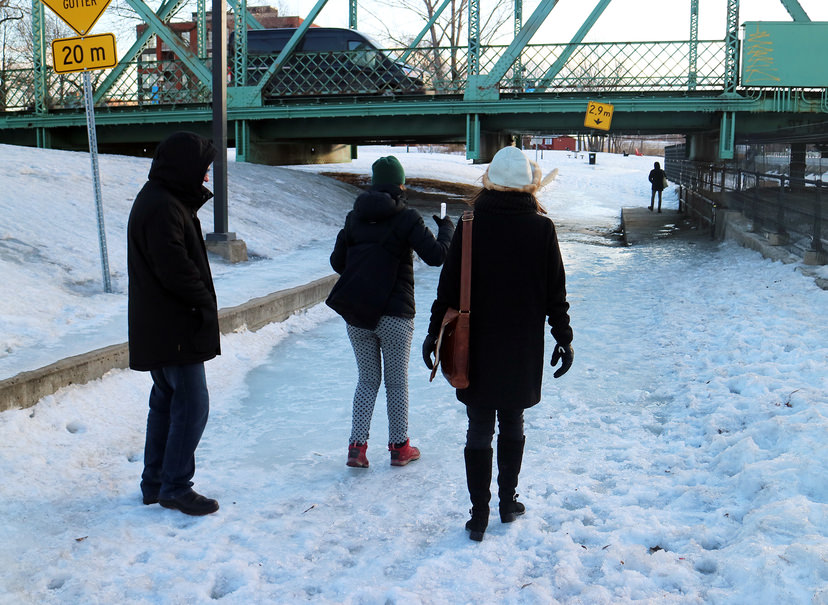 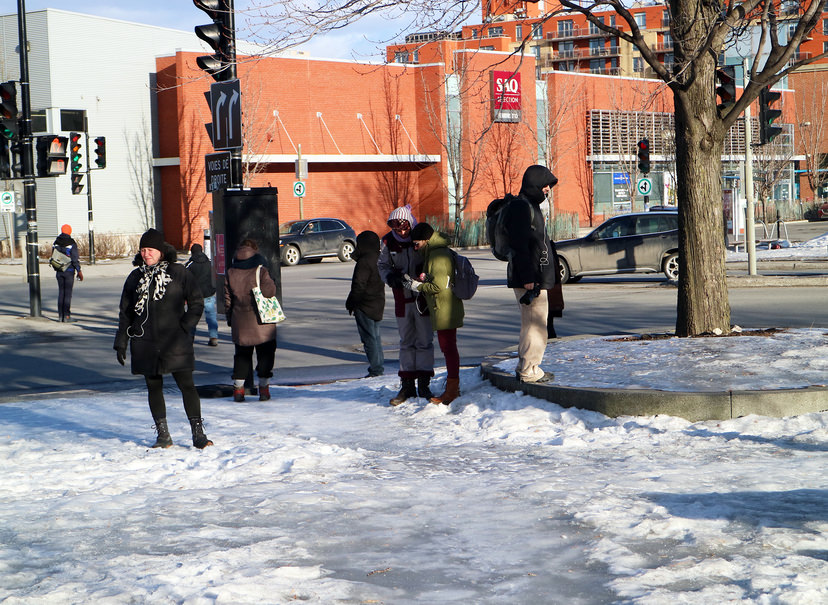 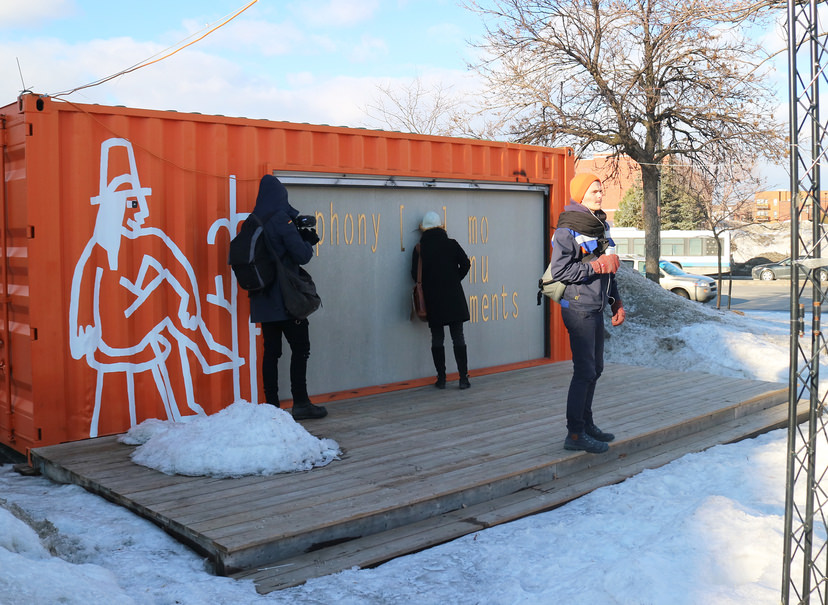 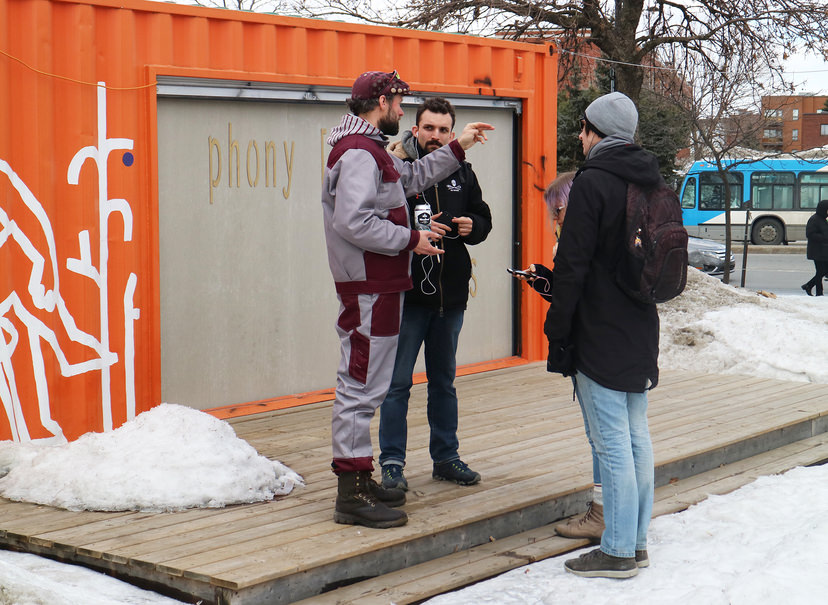 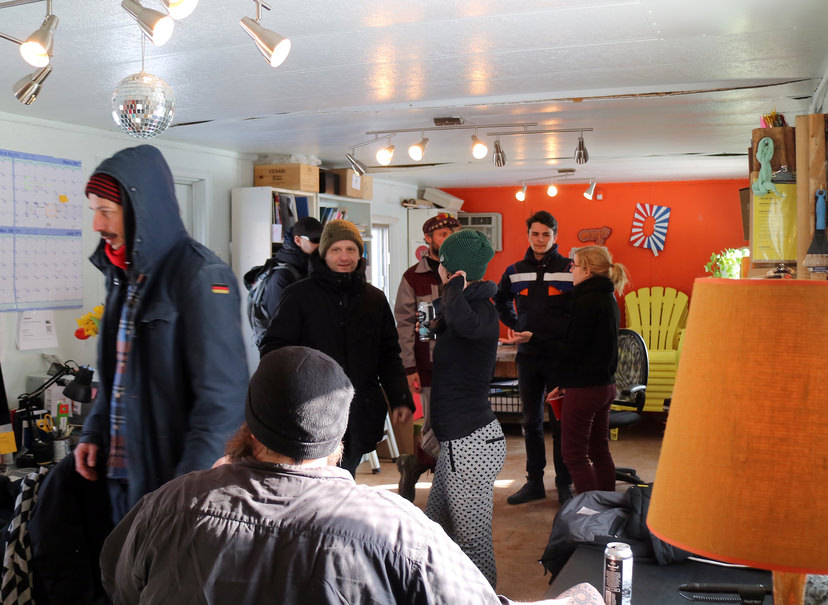 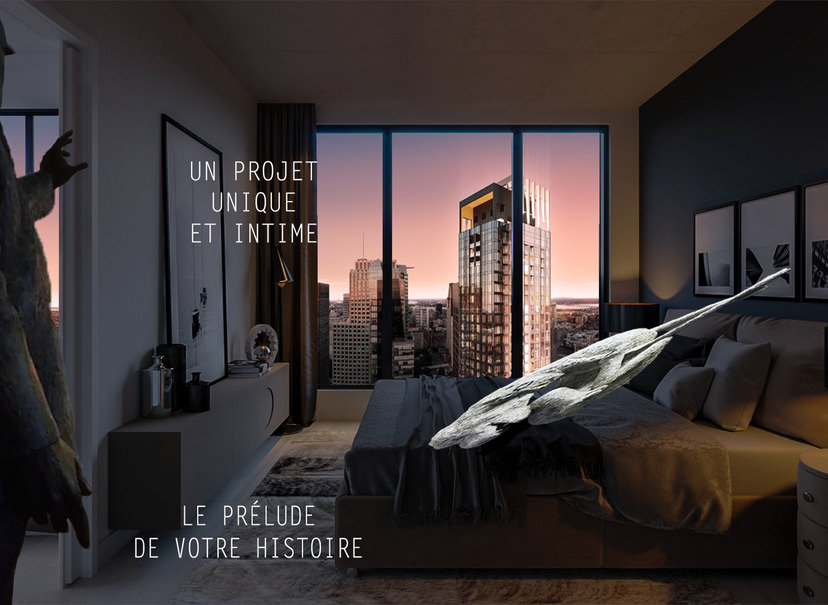 The audio-guided tour at the core of Phony Monuments project marks a trajectory punctuated by different stages between the Saint-Henri and Griffintown districts, along the Lachine Canal. The HALTE of DARE-DARE serves as a starting point and acts as a pivot to start walking. Before or after going there, the visitor transfers the mp3 file on his mobile phone from the web link above.

The objective is to offer an independent experience of the opening of the center, accessible at all times during the total duration of the project. In addition, the guide remains evolving and will be updated constantly.

Inspired by the monumental transformation of post-industrial areas south of Montreal into new "avant-garde, creative and post-modern" residential neighbourhoods, the visitor immerses him/herself in a carefully planned guided tour, like a calibrated routine for the perfect citizen. The ambulation is directed by the listening of the instructions, sometimes as augmented GPS, sometimes as ethical tutorial; this promising new model is activated through the body of the spectator-listener and in the disciplined movement of this march. Thus, the idea of the monument is built horizontally, spread out by the dimensions of many construction sites and their goal of creating residential non-places, at the origin of a new ideal of human body.

► LISTEN | Radio interview with the artist for "arts + espaces publics", by Odile Joron for the show Radio Atelier. At 31:04.

born in 1980 in East Berlin, Lieven Meyer's youth was marked by a society in deep and continuous transformation, based on the fusion of two ideologically opposed worlds.

From 2000 to 2002, he followed the teaching of a graphic artist and painter from Berlin rooted in the tradition and academic methods of the fine arts of East Germany.

In 2002, Meyer moved to the North Sea coast near Denmark, where he pursued a practice of drawing and painting as an autodidact. At the end of this period, he enrolled in 2009 in the sculpture department of the Academy of Fine Arts and Design Muthesius in Kiel. After obtaining a bachelor's degree, he completed a Master's degree in visual arts at the Université du Québec à Montréal in 2016.

With the interest of deconstructing and reconstructing the language of classical sculpture as a figure of political authority, Meyer questions the historical context of sculptural practice through an approach oscillating between ancient, modern and current methods. In doing so, it integrates, on the one hand, traditional materials and subjects with traditional sculpture-such as the idea of ​​representing the human body-and, on the other hand, performance and video-based media in their sculptural quality.

The focus of his research is on the function of (neo)classical codes in relation to the constitution of the present era. This curiosity is inspired by sociopolitical, philosophical and historical discourses on economic and imperial spaces and forms of power within Western societies.

From these reflections flows a conceptual approach that questions various representational means through the creation of environments and events, located in interconnected spaces, composed of historical and political hyperlinks. In his sculptures, installations with varied media, documentaries and performances, Meyer experiments with the fragmented and deconstructed condition of the aesthetic system of art, deprived of its traditional formula of beauty.