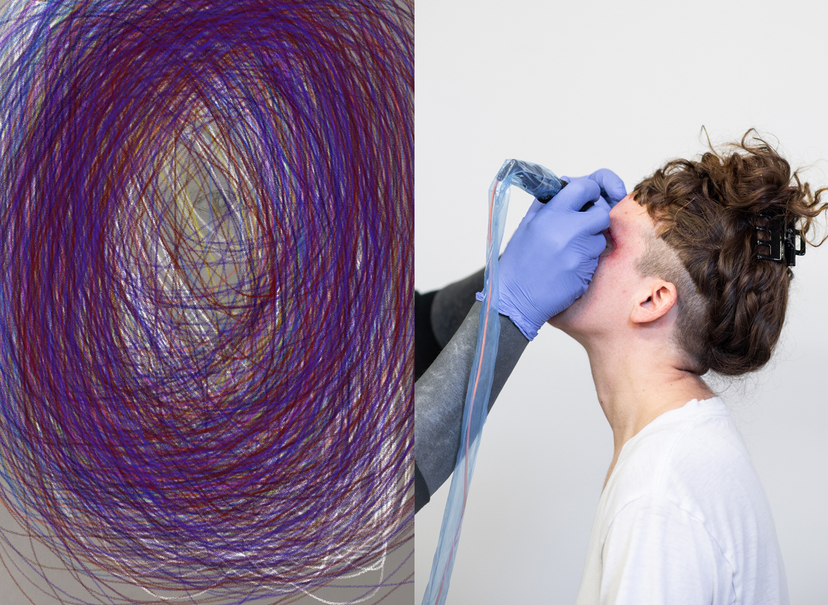 Michelle Lacombe and Lynda Gaudreau have been in remote communication, one in Montreal and the other in Helsinki, Finland. Spanning the better part of 2020, their correspondence included exchanging references, sketches and documentation of explorations that expanded their understanding of self-portraiture, both within Western art history and within their respective practices. This shared process concluded with each artist creating a new work; a self-portrait offered, in part, to the other.

Lynda Gaudreau documented the period during which she was in contact with Michelle Lacombe. Her project Kirjeitä Suomesta / Letters from Finland brings together photographs, video recordings, drawings and writings around the body, self-portrait and still life. Remoteness and the health crisis run through this project that becomes at the same time a diary, travel diary and letter.

Mask: Portrait with cut out eyes is an embodied exploration of pictorial self-portraiture. Formally, the work reduces the illustrated self down to two lines, each encircling an eye to highlight the importance of the gaze within emancipated self-representation while also transforming the face into a mask. The work pulls from different traditions in self-portraiture, including the affirmation of one’s status as an artist, which is evoked by the use of a headshot to document and later circulate the ephemeral body art action.

To mark the end of their duo, Michelle Lacombe and Lynda Gaudreau invite you to meet their work in the form of a virtual launch. During this meeting, the artists will present their works and discuss the collaborative research process that has fueled these new creations with Josianne Poirier (author and researcher in residence at DARE-DARE within the framework of the second cycle of the DUOLOGIE program).

Artist, choreographer, curator and researcher Lynda Gaudreau is particularly interested in experimental practices. She creates devices – videographic installations or performance installations – in which film, body and object interpenetrate. Her projects invite the visitor to an offbeat experience where critical reflection and unusual situations meet.

Lynda Gaudreau has collaborated with many places on the international contemporary scene. Her close link with Flemish culture should also be noted, as well as her collaborations with the Théâtre de la Ville de Paris which co-produced her work for nearly seven years, the Venice Biennale and more recently the Architectural Association School of Architecture (AA) in London. Her doctoral thesis in Arts Studies and Practices was devoted to the concept of asynchrony in the arts. She is currently working as a postdoctoral researcher at Tutke, Uniarts in Finland.

Since graduating from Concordia University in 2006, Michelle Lacombe (Montreal, QC) has developed a unique practice located at the intersection of performance, drawing, and body art. Her work, which takes the form of either short-duration actions or research-based projects rooted in conceptual embodiment, is characterized by her use of simple gestures, mark making, and strategies of discomfort to complicate the reading of her body. Recipient of the 2015 Bourse Plein Sud, her work has been shown in North America, Mexico, Argentina and Europe in the context of performance events, exhibitions, and colloquiums. Her artistic practice is paralleled by a commitment to supporting undisciplined and independent forms of art making. She is currently the director of VIVA! Art Action.