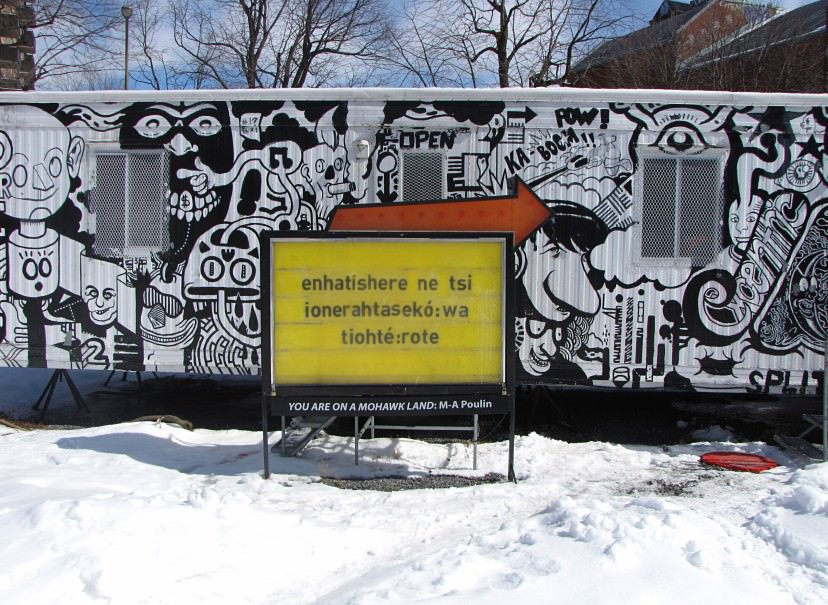 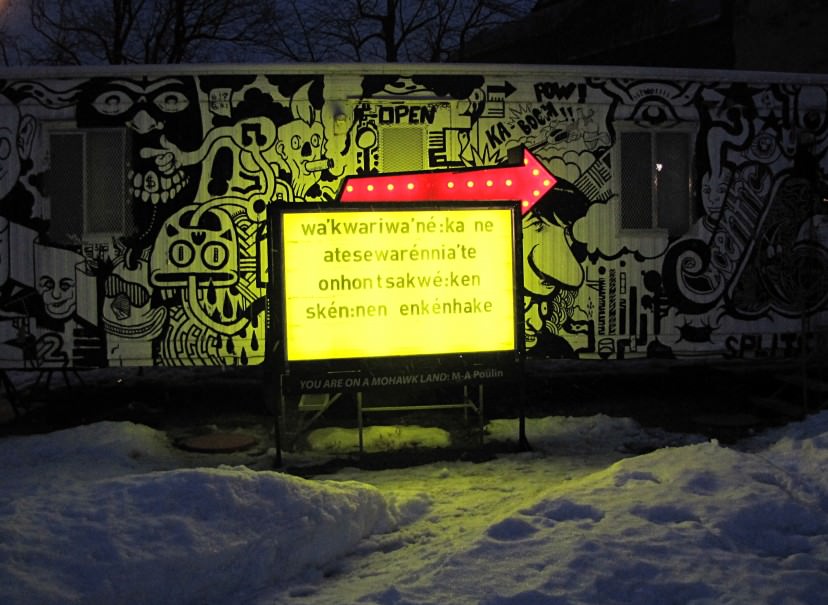 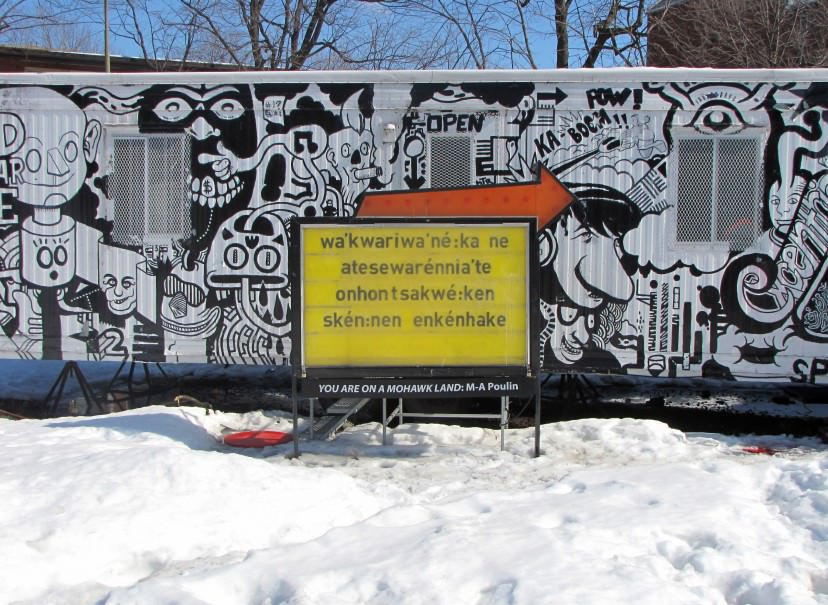 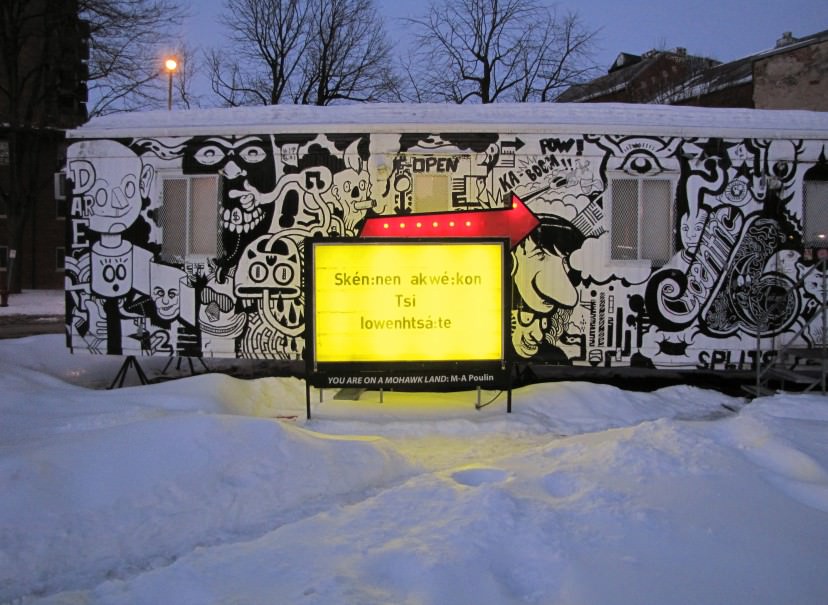 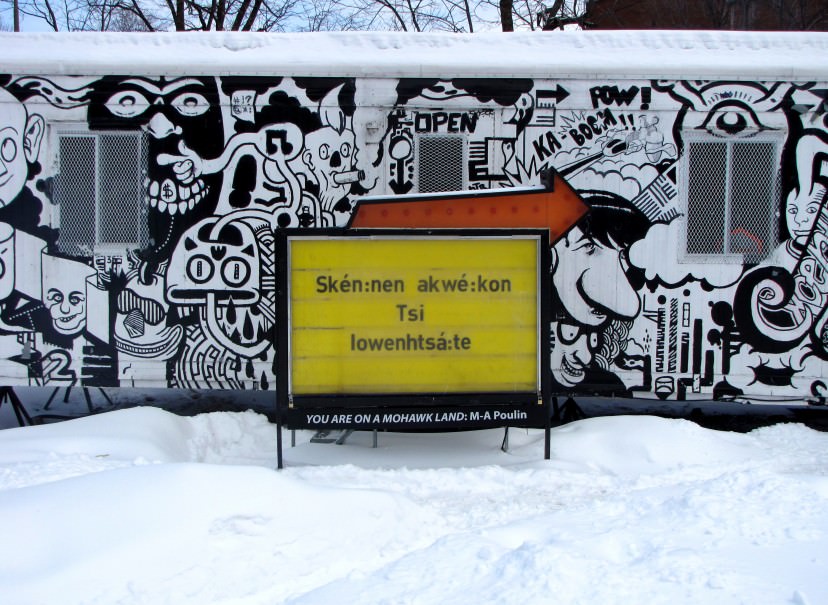 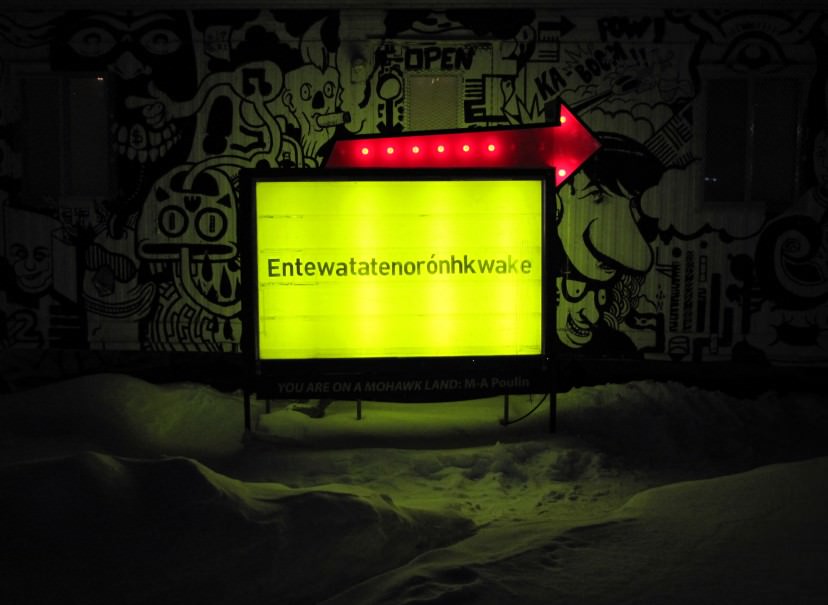 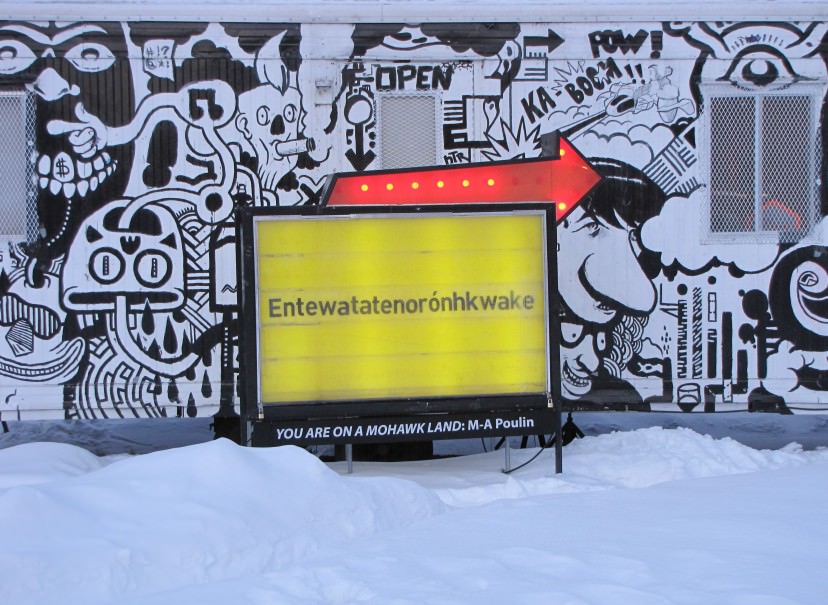 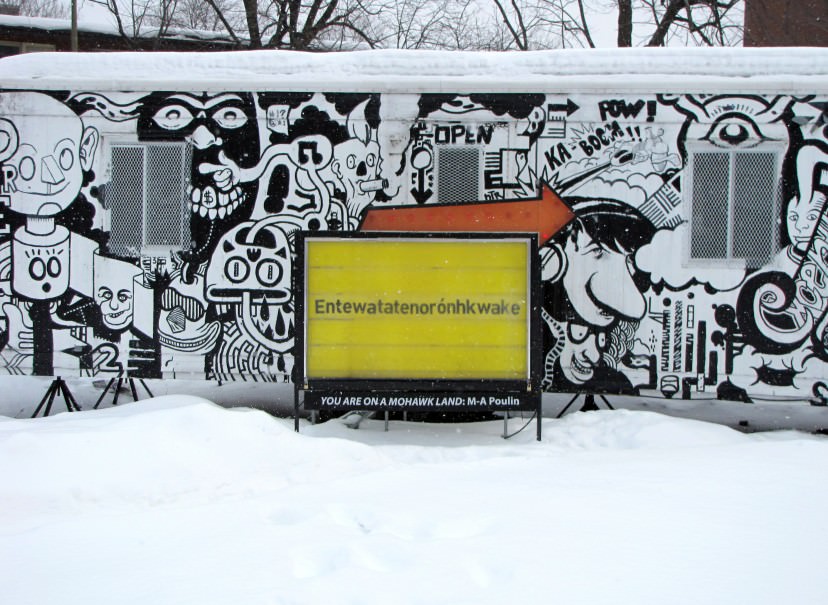 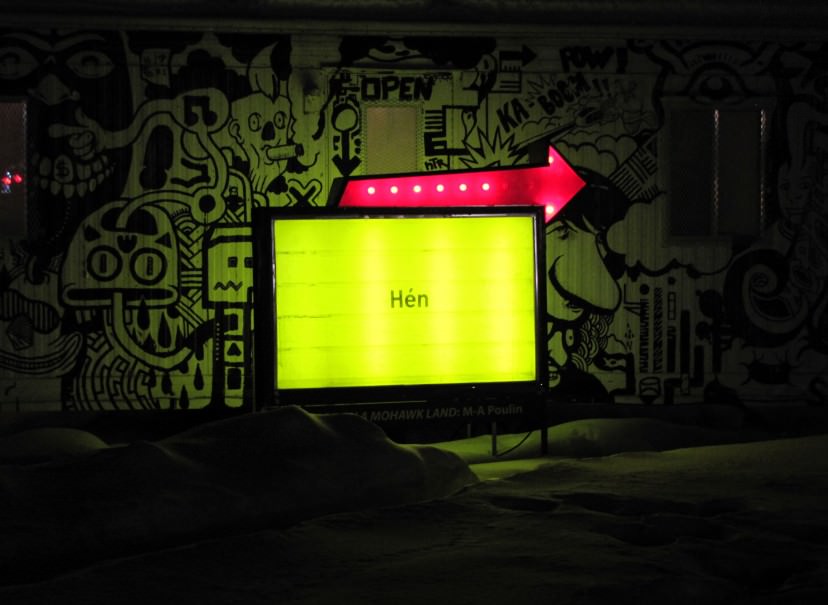 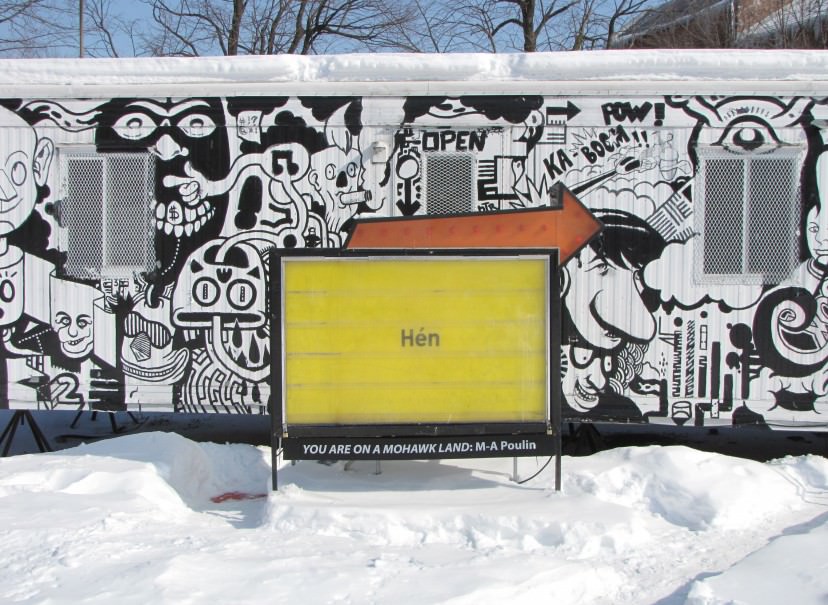 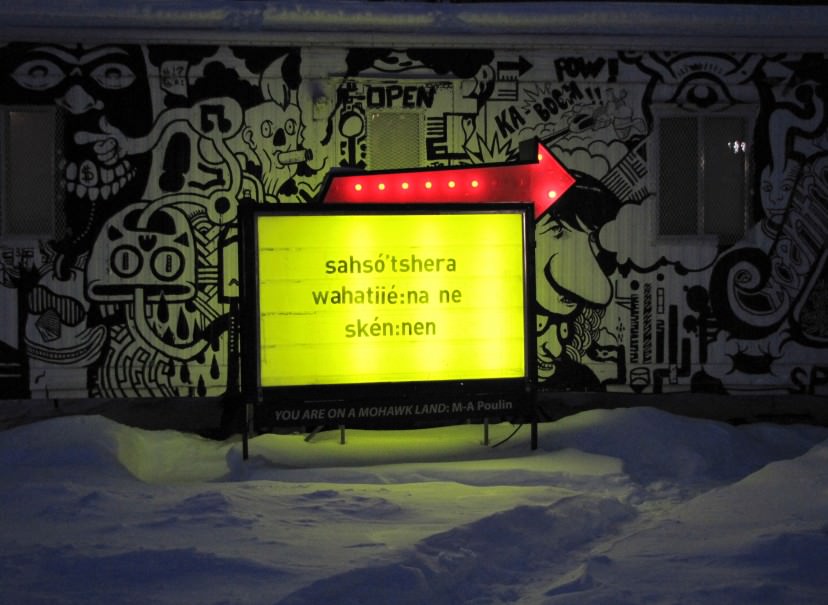 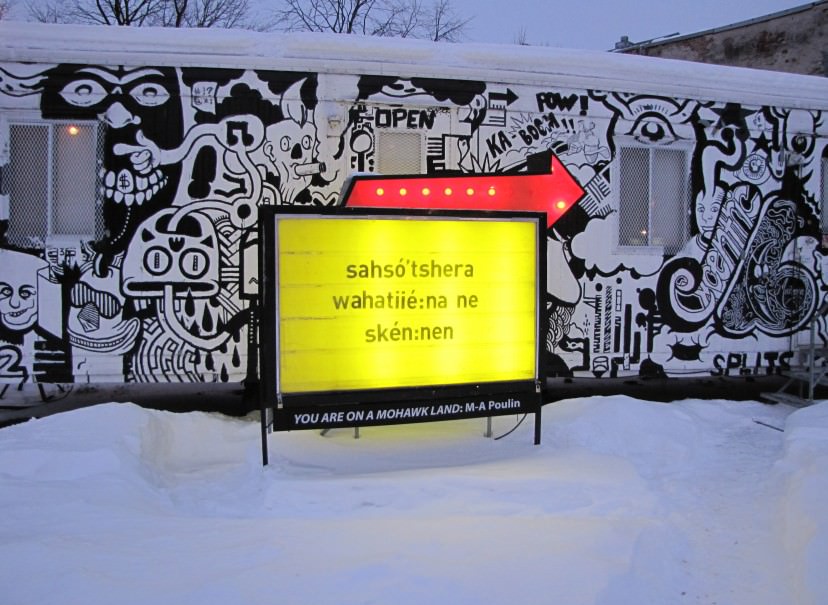 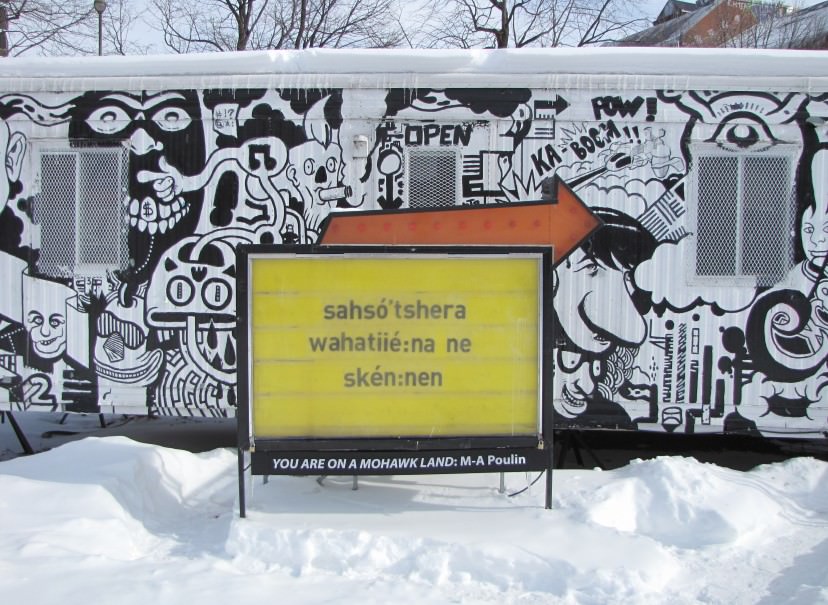 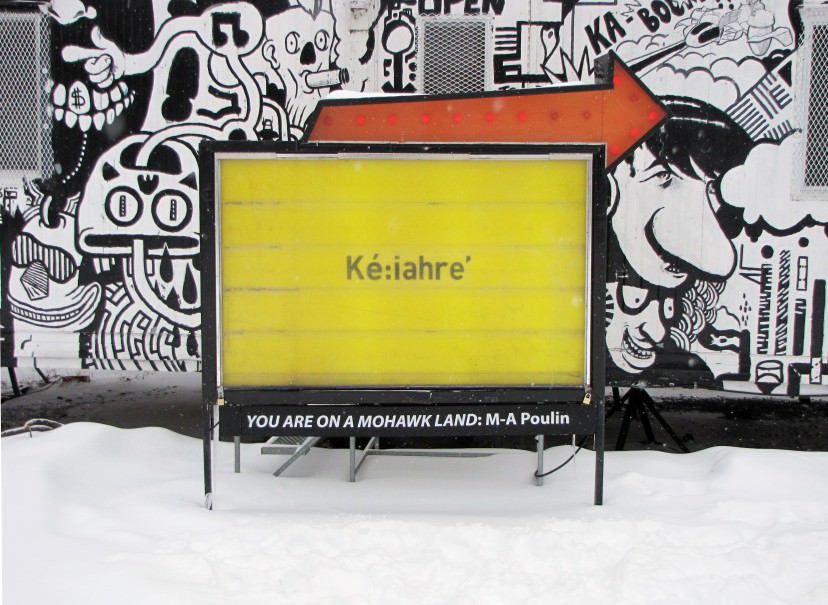 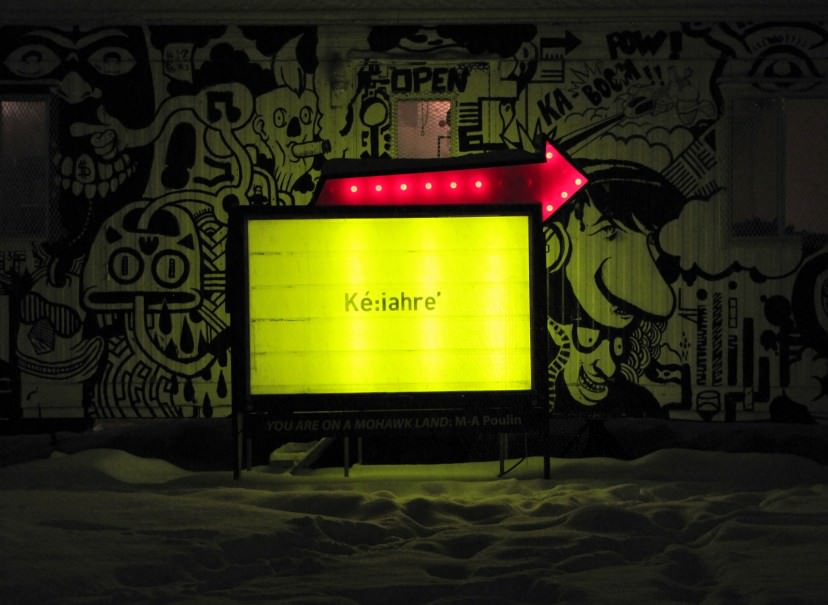 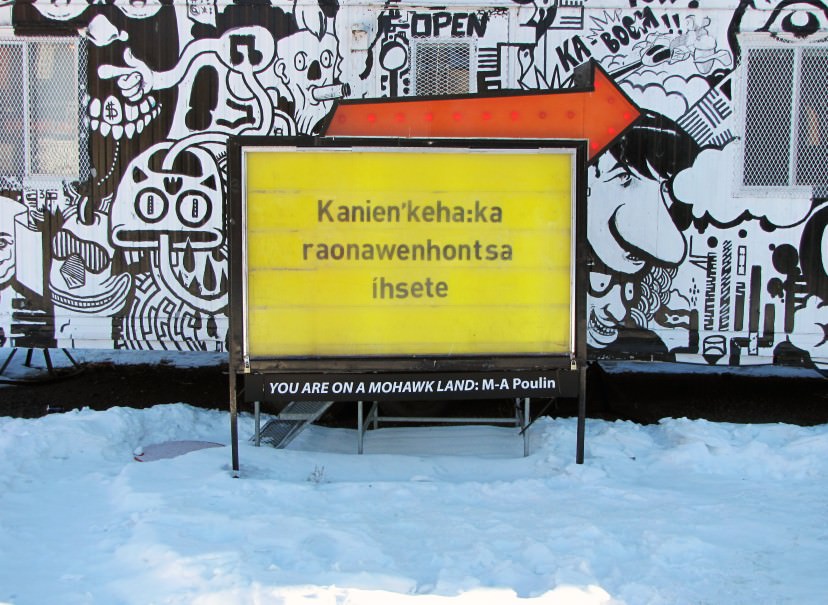 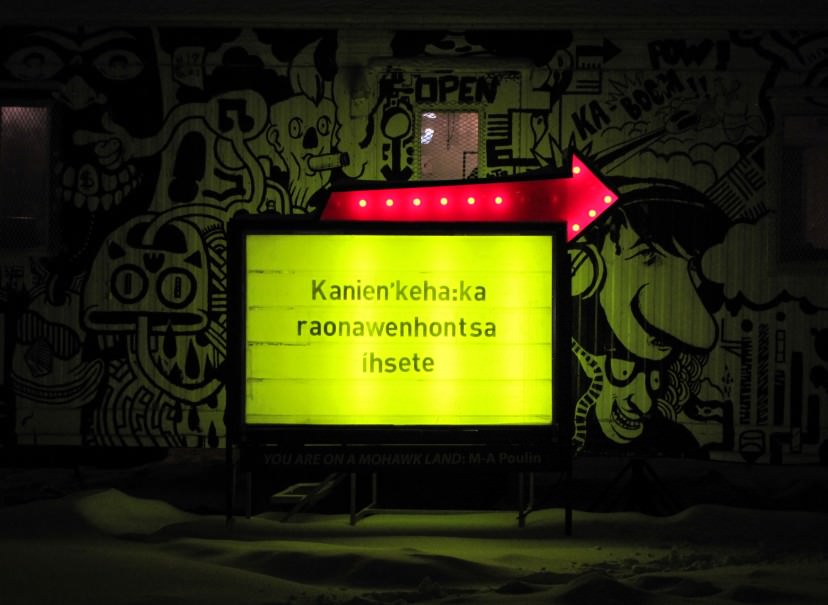 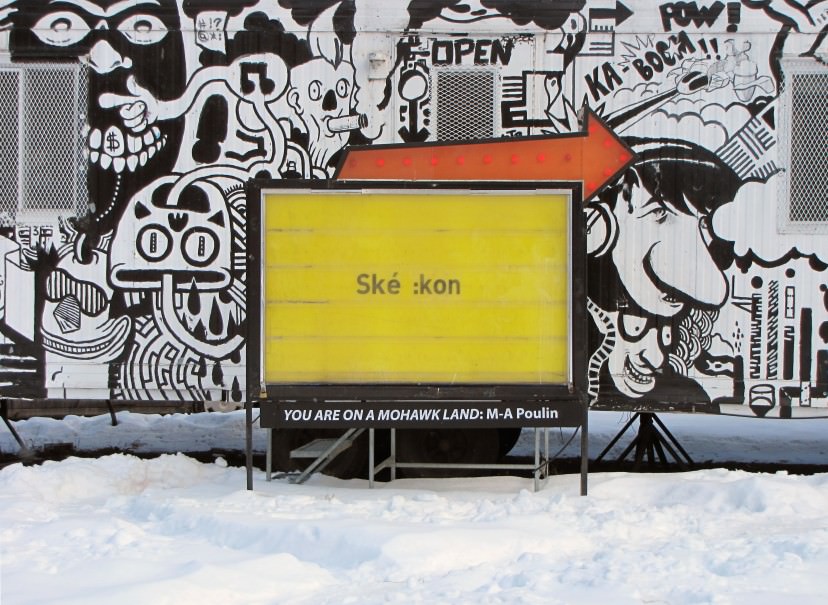 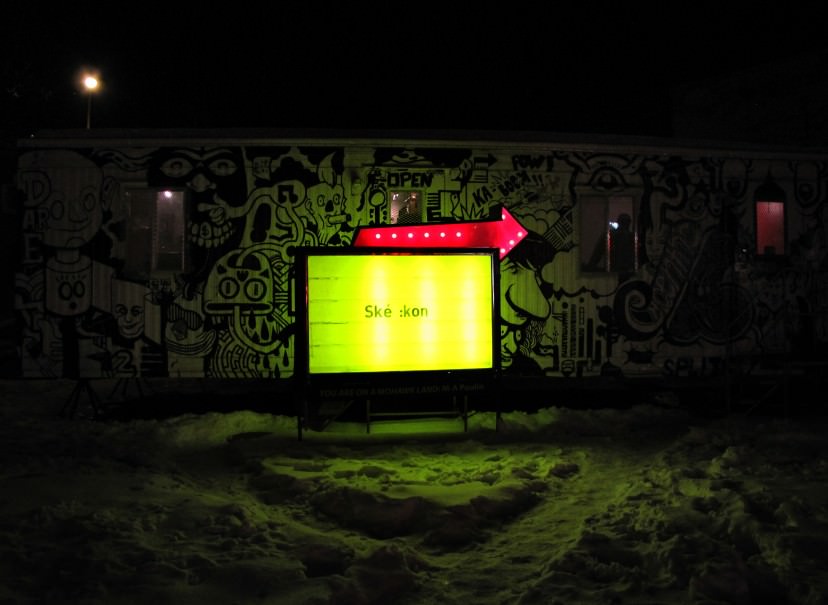 YOU ARE ON A MOHAWK LAND

The idea was inspired by past collaboration with the Kahnawake community. In 2014, I was invited to do a performance during the opening of Jocelyn Parenteau’s exhibition, which focused on the colonist arrival in Sorel-Tracy. For the occasion, I invited the Mohawk community to participate. Band Chief Kahentinehtha Horn delivered a speech which involved a history lesson and a call for collaboration among nations toward global harmony. The phrases of the project, YOU ARE ON A MOHAWK LAND, were taken from that speech.

For the project, my desire is to create a symbolic dialogue between colonist and Iroquois communities. As city dwellers walk by and view the sign, most will lack comprehension of the presented phrases. This inability to comprehend points to the lack of communication between two groups: citizens in Montreal and aboriginal communities. It also points out the collective neglect of 60 existing First Nations languages in Canada, where only two official languages are recognized and where the language debate is bilingual instead of sexaginti-lingual. Furthermore, I collaborated with multidisciplinary Mohawk artist, Marian Snow of Kahnawake, for the translation. The passers-by, I hope, will try to decipher and understand the phrases; however, they will quickly discover that it is almost impossible to translate these writings, since they are from a culture of oral tradition.

Over the weeks, the translation of each phrase displayed on the illuminated light box will be added below.

My research revolves around the domain of ecosociology. The questioning that follows relate to human identities, their differences in a precise context, and their social relation to others. The latter activates primarily through body-to-body contact, through physical and psychological stain, or through the creation of situations between different groups of humans. Comfort, discomfort, malaise, pain, and laughter all become points of interstice, and each will stand out, as long as the process of sensitive comprehension is engaged. I work like an echo: a repetition of sound is produced by the reflection of sound waves from my body, more or less distinctly. I base myself on identity questions, or more precisely, on my native origins and on the collective forgetfulness of First Nations communities.

Marie-Andrée Poulin is an undergraduate student in visual arts at Université du Québec à Montréal (UQAM). She previously studied visual arts at Montmorency College. She received the award for “emerging artist of 2014” for her filmed performance entitled “Je suis ça,” rewarded by the Conférence régionale des élus of Laval and by the direction of Laval, of Lanaudière and Des Laurentides of the Ministère de la Culture et des Communications. She also received a scholarship in visual and media arts in 2012, 2013, 2014 and two honorable mentions from the Fondation de soutient aux arts de Laval. The Coop art UQAM gave her a scholarship in 2014 for her involvement in the artistic community. She notably exhibited in Montreal, Laval, Sorel-Tracy, Rimouski and will exhibit in Europe in the near future.

Thank you to Marian Snow, François Fréchette and Rosalie Chrétien.