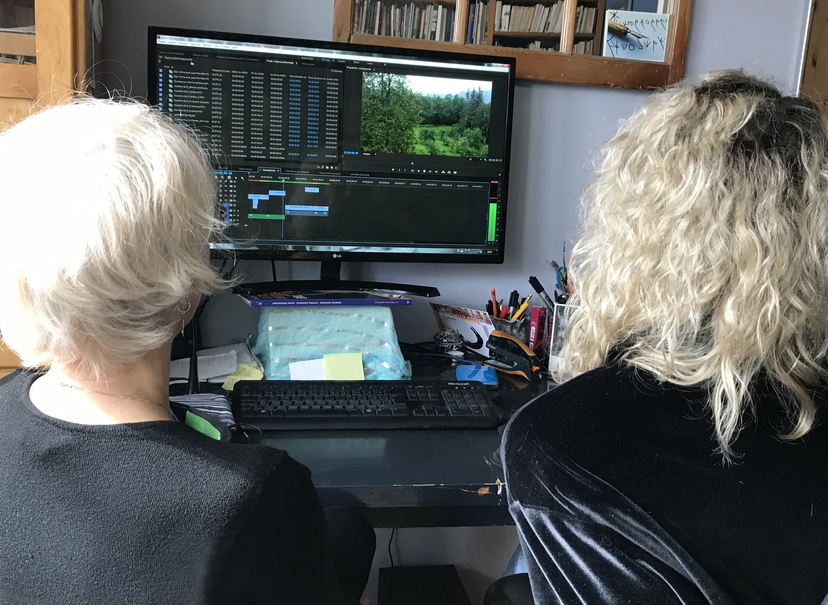 SERVITUDE AS REVOLUTIONARY CAUSE, OR, DOCUMENTING A COMMUNITARIAN EXISTENCE AS A WAY TO REMEMBER (a text on Anne Bérubé and Sarah Chouinard-Poirier)

Throughout the 2020 Duology season of Dare-Dare's programming, resident author Renata Azevedo Moreira will shed a light on the work proposed by the duets created for the occasion. Her work will focus on the processes at play, rather than the results engendered by the different modes of creation chosen by programmed artists. In other words, instead of reaffirming the sense of finality of the projects, as an end, Renata will aim at recounting their meaningful paths and successful ideas.

This text surveys work by Anne Bérubé and Sarah Chouinard-Poirier.

SERVITUDE AS REVOLUTIONARY CAUSE, OR, DOCUMENTING A COMMUNITARIAN EXISTENCE AS A WAY TO REMEMBER

Before it became a labor, it was a vocation. The call to care, to remain in the background for the support of the other. Frequently associated with women until today, caring for one's next of kin as oneself emanates from a religious imperative. Moreover, the act of care takes us back to the hands of christian Sisters who, following the steps of the Virgin Mary, nobly renounce to their own self in the name of their community. The interest of artist Sarah Chouinard-Poirier for nuns does not, however, stem from an intimate relationship with catholicism. As many of the qubecois generations born after the tranquil revolution, Sarah was not brought up in a religous family. It is very likely that she can not tell the names of any objects that live on the altar, such as the ciborium or the antependium, in the same way as Anne Bérubé's literature students. Anne, on the other hand, has seen religion appear in many stages of her life : from her childhood in Matane spent decorating church for religious celebrations to her relationship with her two  aunts, members of the Servantes de Notre-Dame, Reine du Clergé congregation, which has its head quarters in Lac-au-Saumon, in the Matapedia valley of Gaspésie. In November of 2019, the congregation of approximately 30 Sisters celebrated 90 years of existence. Ending 2020, the immense countryside building where they are retired will be sold and the community displaced in the town of Rimouski. While this announces a new chapter in the lives of these women, it also signals the beginning of the end for this community that has not welcomed a single novice nun for years.

The first shooting day for Anne and Sarah's documentary was laborious. After two days of travelling from Montreal, nothing seemed to come together. The two performing artists had given themselves the challenge of directing a movie for the first time in their career as artists, thus bringing issues, problems that accumulated much like the years that made up the lives of these nuns they were attempting to document the lifestyle of. Human relation wise, the Sisters were extremely camera-shy. Sarah and Anne just shrugged it off : « No worries, we can change projects, let's just do a performance », they even thought.

But they managed to work through the technical difficulties until Odette, Mother Superior, gave them an enlightening interview. It was her approval the other Sisters had been in need of, some kind of implicit permission from the congregation's top authority – a woman yet just like others, elected by her peers, and who will revert to her regular rôle once her mandate is over next year.  But in this reality where personal agency is constantly negotiated in the face of religious schedules and according to a strict collective routine, the women needed some hierarchical confirmation to allow the artists into their universe.

In the end, shyness gave way to enthusiasm, so much so that the artists were invited to visit the bedrooms of a few of them : colorful, vibrant environments that called to mind a mix of a child's and a grand-mother's bedroom. These close encounters were facilitated by the family ties between Anne and her aunt Regina, who became the main character of the documentary. Even though she spends all of her time with the others, Regina is not like them. A still very active 93 years old woman, she talks a lot, skips rapidly between subjects and wants to do a thousand different activities in one day. Seeing the artists' camera turned in her direction, her typical reaction was “Good, are you done now ? You got your shot ?” - to which there was no point in answering that it was actually a video being shot.

Generally, the Sisters had a hard time understanding the appeal in documenting their daily life. Anne and Sarah's answer not did seem to satisfy them : that their goal was only to meet them, talk about the trivial in their daily life so that eventually – and that part they kept for themselves – they would access their imaginary, the details that could lead the discussion away from God. About that, in the portrait the artists are proposing, no space has been made for God or Jesus. The protagonists of the film are women who, paradoxically, do not make it their mission to be protagonists. They serve, and it is through this act of serving that they establish their freedom.

When the Motherhouse was inaugurated in 1929, a young woman's life choices were very limited : if she refused to marry, she could become a nun, and that was about it. For many of these young women, community living was way to free themselves from an inconvenient life prospect. For them, freedom is important. According to the artists, it explains why they are not attached to material things, and why they constantly offered them their possessions : a necklace, a stuffed puppy toy, all objects that any other person might find pretty. Their freedom lies effectively in the act of giving.

Chouinard and Bérubé met around DUOLOGIE at a similar moment in their respective lives, at a time where things had to be built slowly in order to prioritize kindness directed at themselves. From the start, they agreed : « We'll be careful not to carry too much on our shoulders ». Throughout this process, the two neighbors became friends and shared ideas and meals. Anne gathered all the similarities between them in a big research book dedicated to the project. Pictures of previous works, coincidences on their journey and observations on the present and the past illustrate today this beautiful common tale. Of course, their likeness soon revealed itself : a taste for social involvement, for political art, and above all for art that sits with people. Sarah and Anne came to know each other through and thank to the nuns that became their collaborators. It was, after all, the atypical lives of women that interested the artists the most.

Thus, in the summer of 2019, Sarah stepped into Anne's car to go on a tour of her colleague's family roots, but also of her own as she is also from Gaspésie. Anne is grateful : « Not everyone gets to dive into such an adventure ». Yet, Sarah did not see this investment like a challenge, because she has an ability to adapt to the other when meeting someone : « I work everyday trying to connect with people who I don't necessarily share much »

Despite the initial reluctance displayed by the Sisters when they first met, the foray was successful. Some of them felt so comfortable with the artists that they started acting out movie scenes for the camera and Anne was blessed with many affectionate words when she visited Gaspésie for the 90th anniversary last November. However, the process-based approaches – those that focus on the unfolding of creativity rather than its outcome and that don't normally set predictable, definite goals – contain a central challenge that is as beautiful as it is unsettling. How does one remain in the present moment without losing sight of the quality of the result ?

What they know for now is that the film is not the only objective of this project : it must also come back to its starting point – the religious community – by showing them the movie and waiting for their approval. That is part of the sorority that they imagined together as their agreement. Until then, Sarah and Anne are trying, whilst editing their film, to make sense of these five days spent with women who did not choose to live together, but are united for life; who managed to subsist relatively in the margins of capitalist economy, without ever touching money or glorifying consumerism, thus enabling more harmony in communal living. Above all, they are joyful women who carry and share daily their happiness through a radically alternative lifestyle, one that is easily judged by outsiders, but that is so awe-inspiring to witness from the inside. They are revealed to be fulfilled women through the complex lens of this study on servitude.