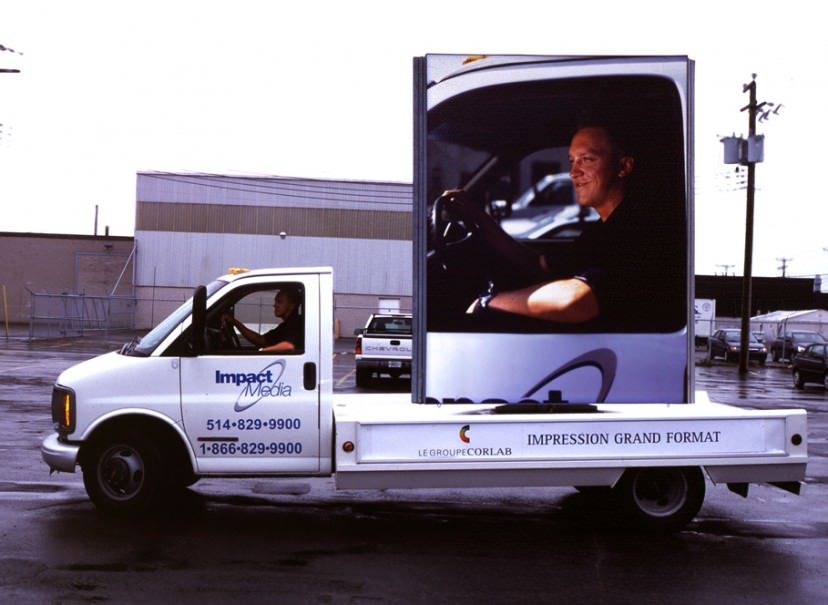 Faced with the obvious conclusion drawn some time ago by Regis Debray that there are “too many images and very little substance,” or as Baudrillard puts it, “though images tell all, there’s nothing left to say” artists go on creating while strategically striving to controvert these statements. Certain dissemination spaces are today reshaping the interpretation of images by innovating and finding new use for presentation devices outside of gallery walls, thereby redefining their relationship with the presentation space. This new context begs us to reconsider the role of their existence. Can they however take on a life of their own and solicit the attention of urban passersby in a manner different from usual media advertising? What crosses our mind when an unexpected image—both in terms of content and form—strikes us unawares?

This research residency will highlight a decade of work done in Montreal by various pictorial artists. Based on their form, method of presentation and the processes of legitimization that lead them to be communicated outside of their presentation space, the research will analyze cases in which the artists attempted to divert spectators away from a normative reading and to transgress the usual communicational codes of advertising imagery. As media images how do they differ from others found in the urban commercial landscape; how does their location differ and how do they impact the public? To what extent do new technologies such as digital imaging—which are responsible for increasing the presence of imagery within public space—cast them under a different light? A comprehensive review of such works performed in Montreal, as well as a bibliography, in collaboration with Félix Chartré Lefebvre on these key issues will be made available at the term of the research.

Sonia Pelletier is an active member of several Quebec cultural organizations and works as an accomplice, project coordinator, art critic, curator and independent publisher in the field of contemporary art. Besides ideas, politics and culture, she takes an interest in action, intervention and plastic art, as well as their multitude venues for dissemination, both ephemeral and permanent. On top of contributions to numerous artist centre publications in Montreal and regionally, she has published in Le Devoir and in the cultural magazines Ciel variable, C Magazine, Espace sculpture, Esse arts + opinions, Inter, Art Actuel and Spirale, for which she also served as artistic director between 2006 and 2009. Between 2002 and 2005 she served as coordinator for Éditions Artextes and between 1989 and 1996, founded and directed PAJE (Projet Adapté à la Jeune Écriture); a publishing house devoted to literary works, essays, comic books and exhibition catalogues. There she oversaw the publication of, among others: ATSA Quand l’art passe à l’action (ATSA, 2008), and more recently in collaboration with Michel Lefebvre and Bernard Schütze .(La Société de Conservation du présent), (1985-1994) (Agence TOPO, 2013). She is currently the editorial coordinator of Ciel variable magazine.

Translated into French by Nils Lövgren.