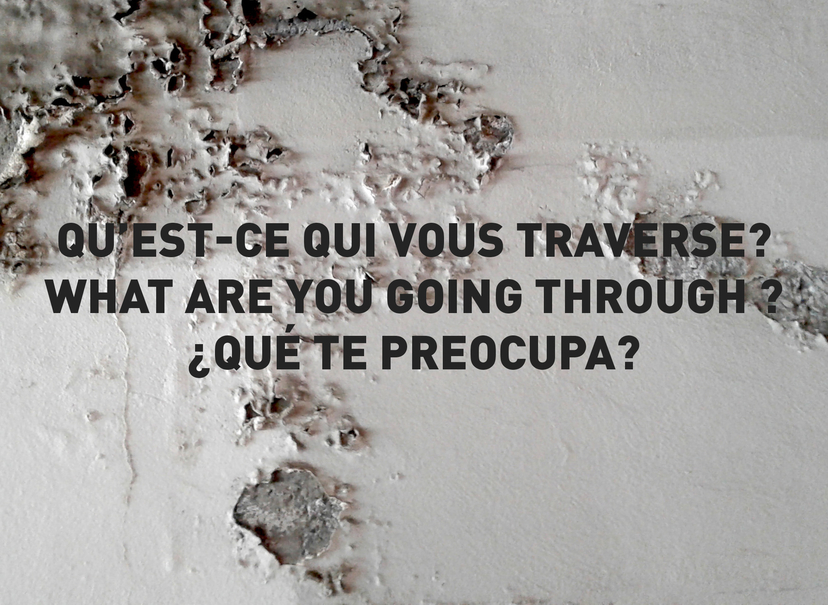 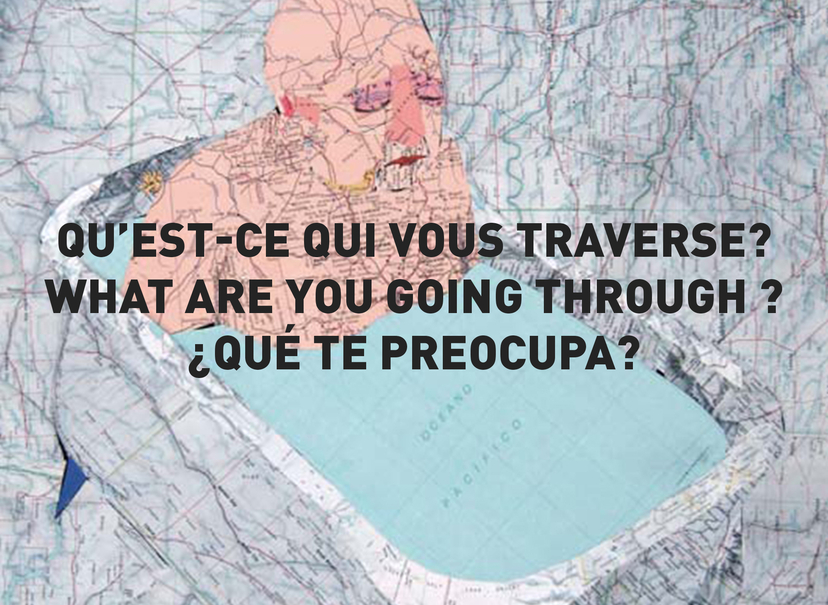 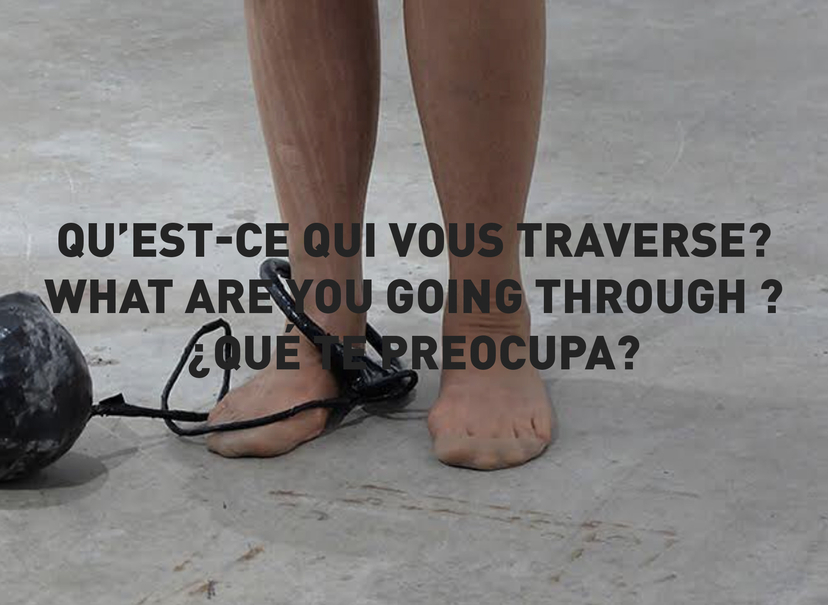 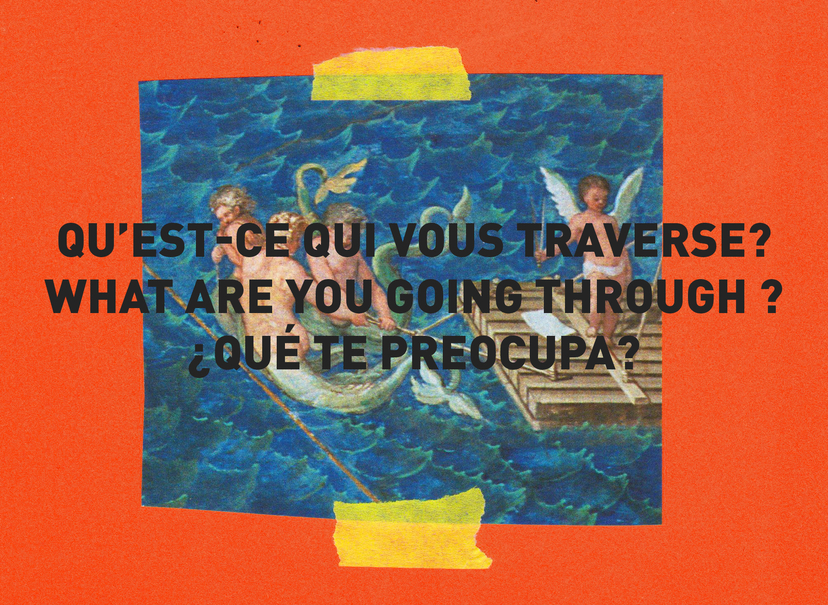 WHAT ARE YOU GOING THROUGH ?

Our mission is to explore, question and help practices, spaces and modes of dissemination of contemporary art evolve and to participate in its democratization and accessibility. Created by a committee formed by Frantz Patrick Henry, Sylvie Laplante, Rose de la Riva, Helena Martin Franco, Eugénia Reznik and Martin Dufrasne, the WHAT ARE YOU GOING THROUGH? programming will unfold in the fall and winter of 2021-2022.

This year, we have decided to take a break from a theme to guide our 2022-2023 programming. We want to hear from you in these serious times. What are your concerns, what are your needs?

Intervention in the public space

Joni Cheung aka SNACK WITCH is a Canadian-born Hong Kong-Chinese person investigating the interdependent relationship between objects, place and identity through an interdisciplinary research-based practice. She uses her lens as a woman of colour to navigate discourses of transnationalism, migration, and diasporas. Cheung early family memories function as a point of departure to reflect and respond to global contexts and (hi)stories. She collects and reference still and moving images, texts, audio and soundscapes, objects, places and spaces, popular culture, and digital media. This research presents itself as installations, sculptures, performances, texts, photography and video, as well as accumulations of ephemera that bring attention to things often overlooked.

Camille Deslaurier Menard, a trained actor, writes out of necessity and tells stories for the pleasure of it. At the beginning, it was stories of Ti-Jean for the children, then slowly, the creation gains time. She loves the repertoire of the whole world, the forgotten characters, the infinity of the words and their wonderful echoes... She has performed at storytelling Sundays, but also in public spaces, museums, schools, at Festilou and more recently in daycare centres with the Pointe-à-Callière Museum and its activity À petits pas dans l'histoire... Camille is also an author, director and teacher.

Maria Ezcurra (MFA, PHD) is a Latina-Canadian artist, educator and mother. Recipient of the Prix de la Diversité en Arts Visuels by the Conseil des arts de Montréal 2019, Maria is also an Emeritus Creator by the National Art Creators System in Mexico. She has participated in numerous exhibits and public art project worldwide, including the Museum of Modern Art in Mexico City, the Carl Freedman Gallery in the UK, the Nuit Blanche in Toronto, the Montreal Museum of Fine Arts and La Centrale Gallery. She obtained a PhD at Concordia University with the first research-creation doctoral project presented at the Department of Art Education, and has taught art in a number of universities and organizations in Mexico and Canada over the past 20 years. Maria has worked as an Artist-in-Residence in the Faculty of Education at McGill University, where she is a course lecturer. Founder and art facilitator of the McGill Art Hive initiative, she has also developed diverse community and participatory art projects.

Paola Martinez Fiterre confronts her own gaze with the history of the representation of women in spaces such as public or private, in relation to desire, psychology or the loss of innocence. She creates in an effort to integrate herself into a collective memory of displaced or exiled people by their origins, having to evolve in this crossroads of influence between the society they were forced to leave and the one that welcomes them, without belonging entirely to either one. Using her own body as a place or material, she seeks to transform the perception of everyday situations and reflect on her own condition as a Latino (Cuban) immigrant in the United States. Her work evolves between the tension of the "innocence" of her "feminine" upbringing and the violence that these conventions can project onto her.

Bélinda Bélice is a poet, writer and musician based in Montreal/Tiohtiá:ke. She holds a master's degree in French-language literature (research-creation) from the University of Montreal. She is interested in staging the female voice, women's bodies, especially those of black women. Active on the Quebec music scene, she forms the soul/world music duo (Haiti), Bel and Quinn, with her sister and jazz guitarist, Christina Bélice.

Martina Chumova, born in Prague in 1984, grew up (mostly) in Quebec. Interested in many disparate things, she studied anthropology, German studies and history before working in publishing. She has published short stories in journals and collectives; her first novel, Boîtes d'allumettes (Cheval d'août, 2020) deals with immigration and memory by focusing on the detail, the oblique, the fine texture of everyday experiences. She lives in Montreal.

Club Ami is a mental health day center founded in Montreal in 1983, located on the 5th floor overlooking the Côte-des-Neiges sky. It is a place for people, most of whom are psychiatrically ill, with serious and persistent psychopathological problems. While everyone can find support and active listening at the Club, the goal is not so much to provide services as to create a small community around the simple fact of being together. We meet here to chat, play cards, dominoes and explore in a minor but continuous way all kinds of creative practices: drawing, collage, writing, radio, film, photography.

Geneviève Thibault questions, through a reflection on inhabiting, the (so-called) boundaries between public and private space, identity and otherness, intimate territory and social fabric, as well as the forces at work in the act of inhabiting. These concerns, which all converge on the question of living in a territory, have led her to Aboriginal studies, to the study of ethnology, and then to the practice of art. She uses photography, video, installation and writing to give form to her questions in different spaces, public or private, real or virtual. Living 630 kilometers east of Montreal, she teaches photography at the Cégep de Matane while pursuing a master's degree in art practice at UQO.

Mariza Rosales Argonza s a visual artist, curator and independent researcher. She is a graduate of the National Autonomous University of Mexico (UNAM). University of Mexico (UNAM), she holds a master's degree in art history and a doctorate in modern and in modern and contemporary art. She has taught in both undergraduate and graduate programs. and graduate programs. Her research focuses on Chicano art, Latino-Quebec art and issues of equity. and equity issues from a decolonial perspective, she is interested in the relationships between art and society, particularly in intercultural societies.