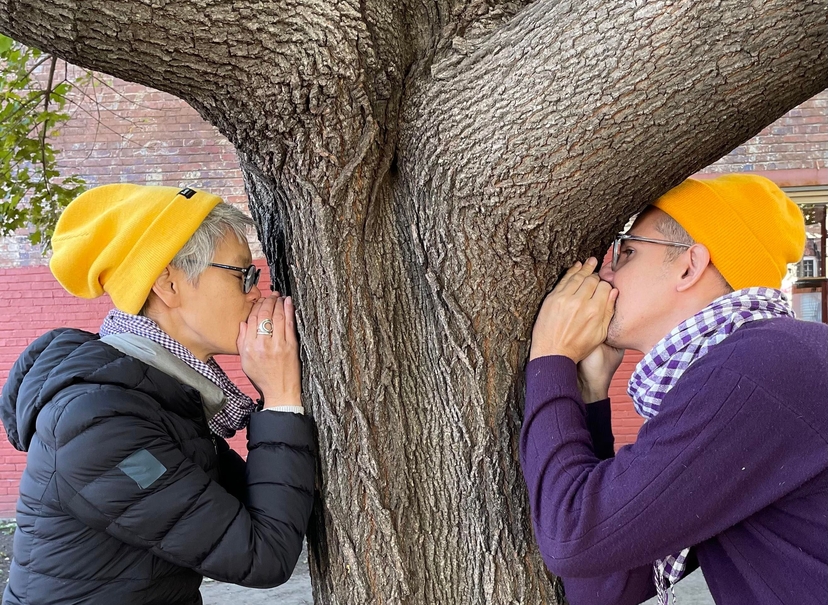 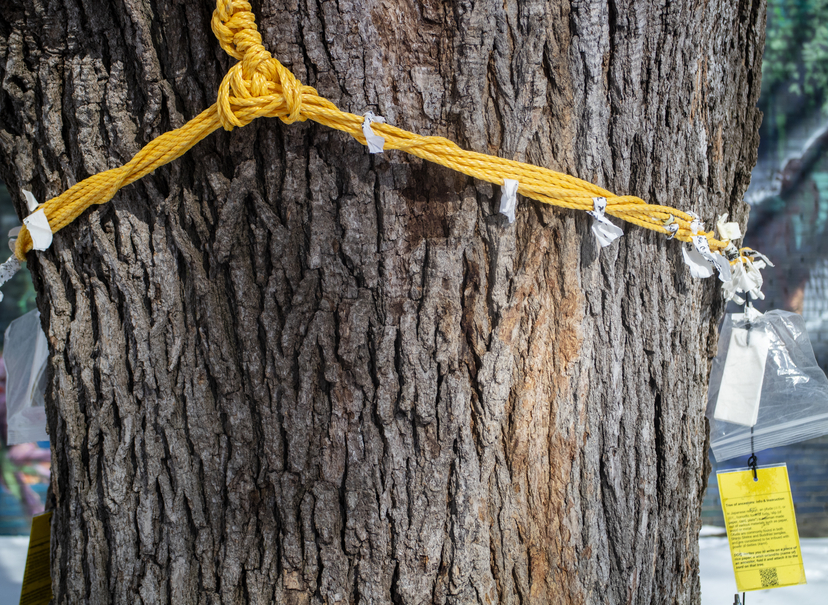 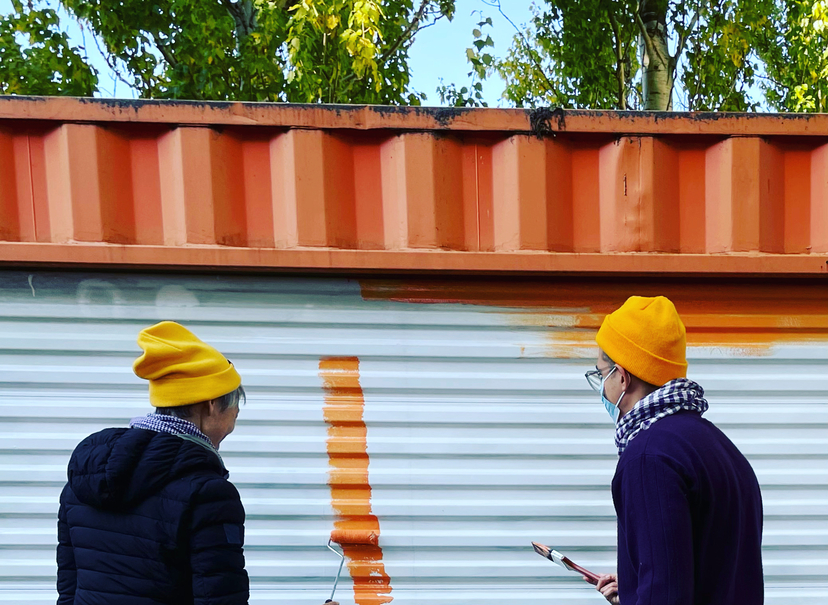 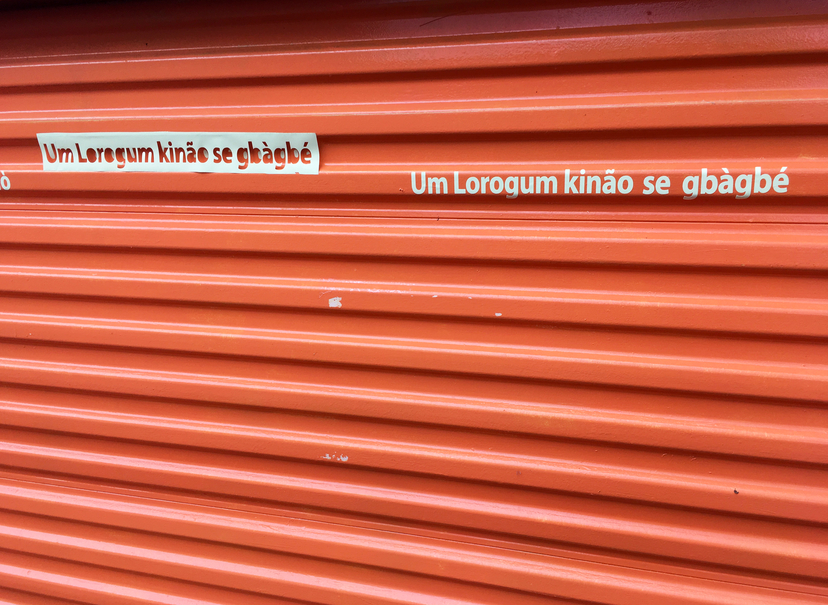 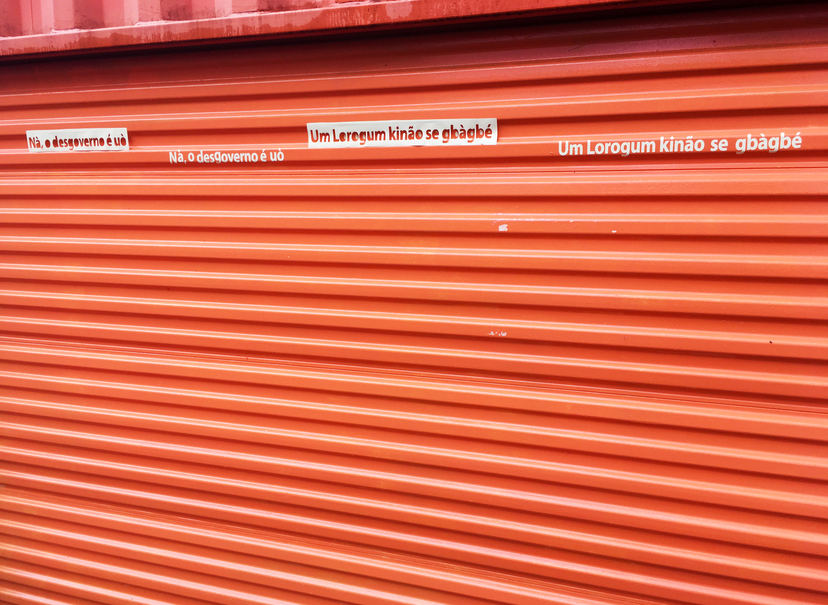 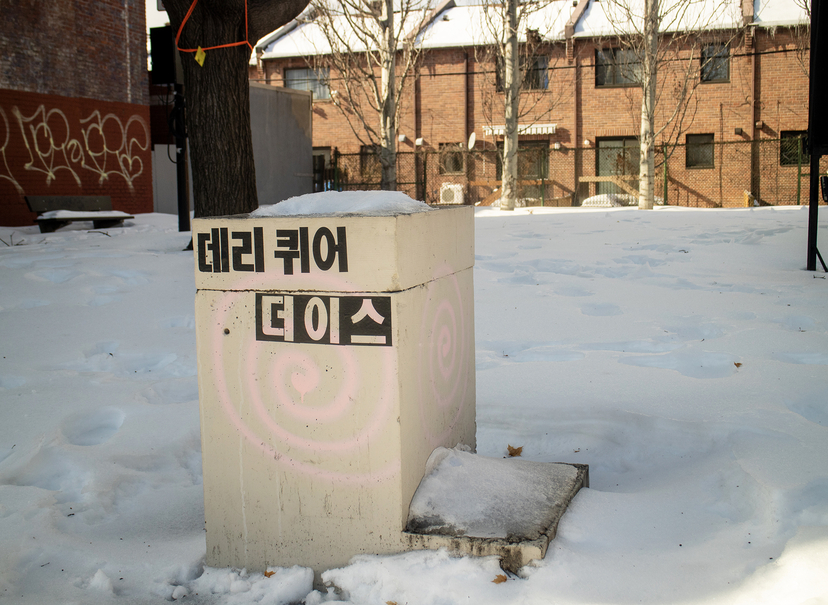 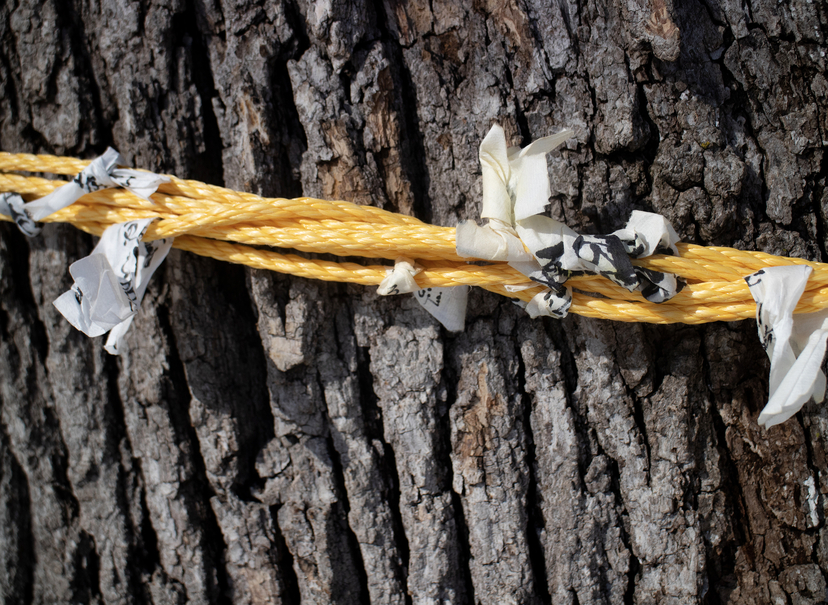 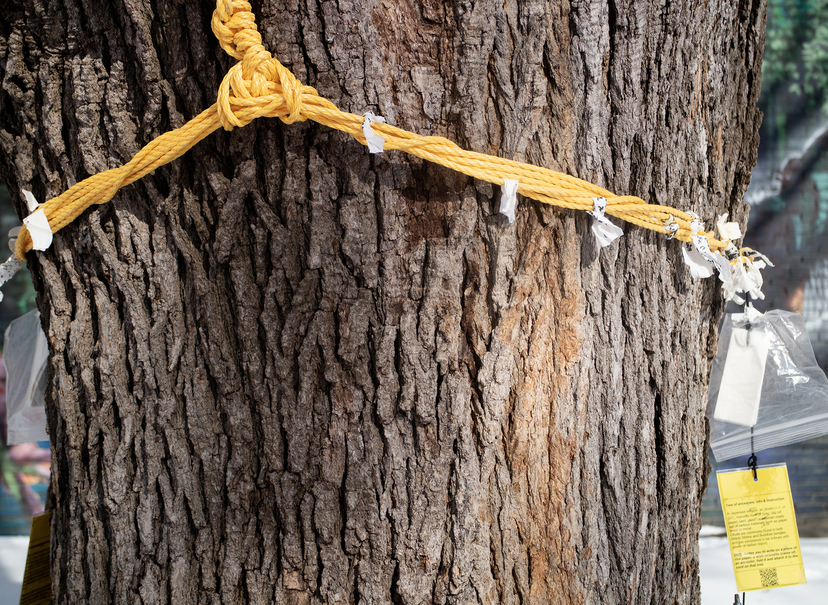 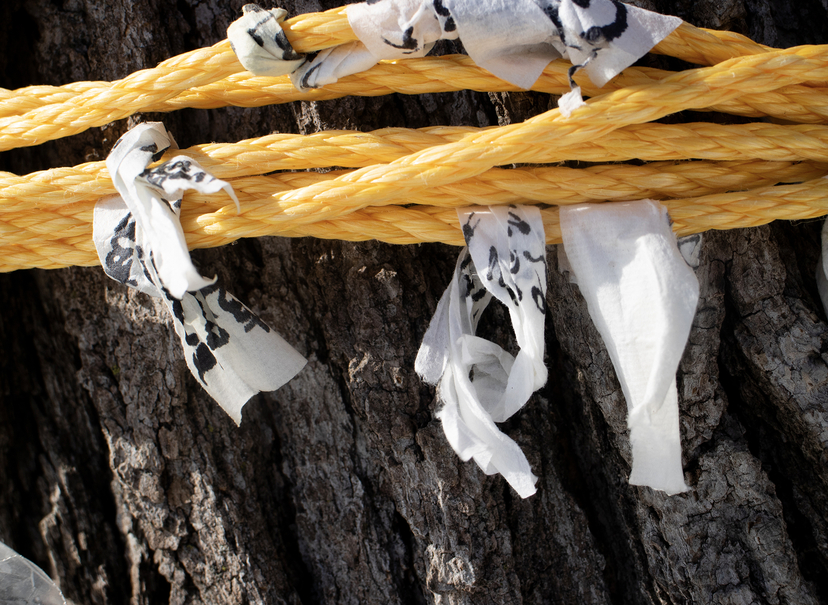 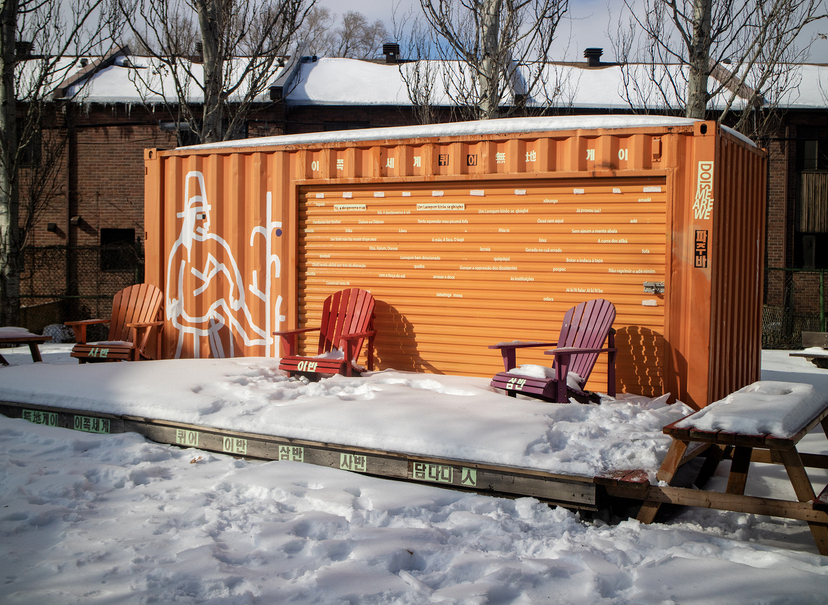 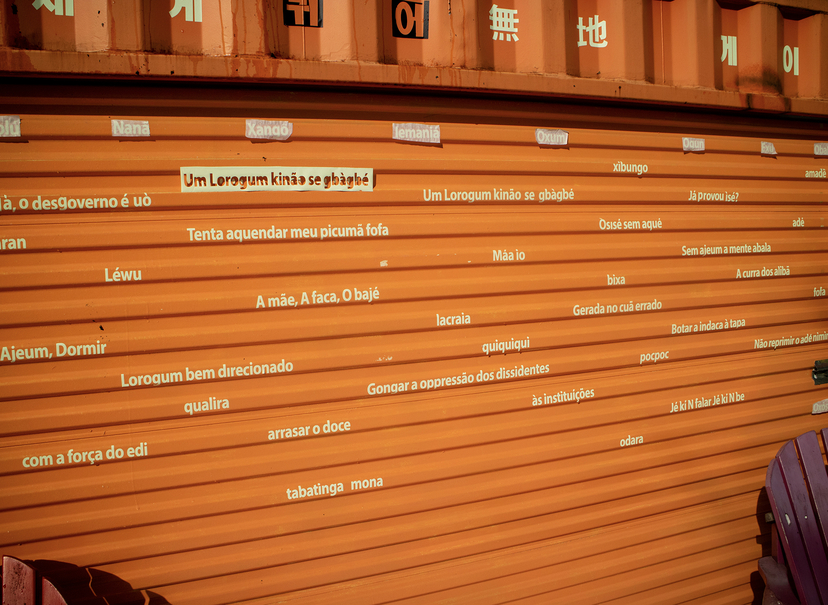 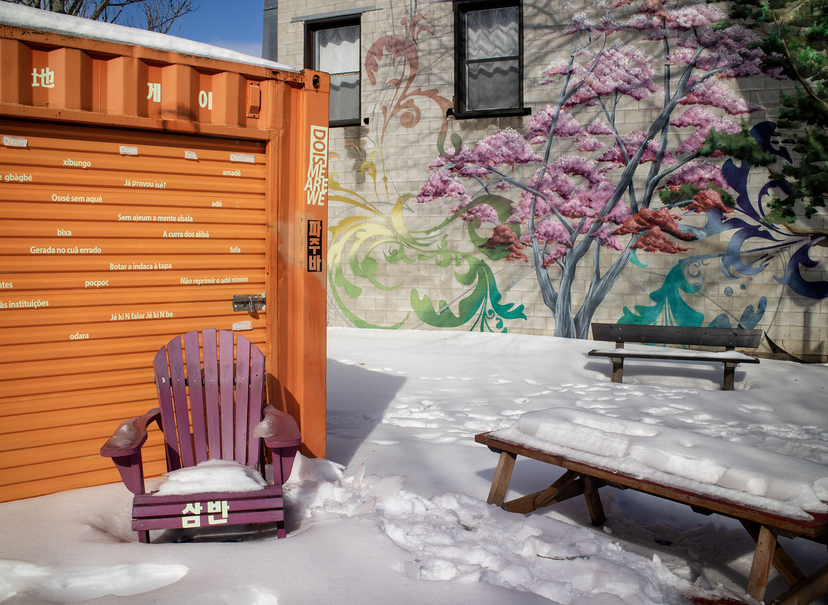 DOIS (belote & kimura-lemoine) invites the public to MEAREWE, an in-situ, evolving and participatory installation in Sainte-Cunégonde Park, as part of our Translation program.

Coming from queer communities of their native country, fernando Belote and kimura byol lemoine are interested in how the performance of language can be a vehicle for a contracolonial charge. They welcomed disruptive interventions that reshape the communication process and unfold the psychological dimension of survival strategies. Corporeal reminiscences of a traumatic past, transgenerational oral performances, and community-enclosed deregulations are purposefully revived to honor the knowledge that has composed the landscape of queer communities in Brazil and South Korea.

While kimura-lemoine evokes performative aspects of language by drawing attention to Korean queer words and adapted Shinto ritual gestures, fernando has initiated a semantic research that focuses on the ancestral contributions of Yorubas to the P(B)ajubá language, its connections with the terreiros de candomblé and transgenre expressions.

fernando's act of translation circumscribes the political, cultural and personal elements that frame the use of Brazilian bixa vocabulary. The work is an evolving word game based on fernando's connection to Northeastern dialects, street-level P(B)ajubá, and memories from growing up in Brazil. Moreover, fernando's research on P(B)ajubá embraces a collaboration with the Brazilian activist Neon Cunha.

It was upon returning to live in South Korea from 1993 to 2006, when ze came out in his native country, that kimura-lemoine reconnected with the translation of everyday Korean queer life. Ze learned how to navigate ‘saferly’ in a society that is very homophobic due to extremist Christian religious believes and mixing with what shinto visually appeal to zer imagination of connecting and honoring our queer ancestors.

MEAREWE, which will be deployed over 100 days in the space of Sainte-Cunégonde Park, is intended to be a participatory experience between the artist duo and the public. The installation will evolve over time and will be punctuated by several interventions:

‹on the left› is the "secret" tree where you can whisper your secret(s) in the cracks of the tree's skin, as we do in Asia ;

‹on your right› a big tree will welcome you to write your wishes on rice paper that you will fold and tie to the string placed on the trunk of the tree;

‹behind these large trees› on the HALTE, alongside queer Korean expressions, P(b)ajubá is celebrated with a bixa poem, a performative podcast with artist renata paciullo and a bafônica i babadeira collaboration with Brazilian activist Neon Cunha. On the side of the orange container, QR codes will direct you to audio tracks.

‹on the bottom of the wooden deck› Korean queer words will appear weekly (every Wednesday) with the color code of Saekdong, a traditional Korean fabric.

DOIS (two in Portuguese) is formed by two immigrant artists based in Tiohtià:ke/Montreal who met at the articule artist-run center in 2015, as part of the event Playing with Food organized by artist/curator Priya Jain. It was on this occasion that the similarities in their artistic practices and concerns were revealed.

Fernando Belote is a queer and multidisciplinary artist from a culturally diverse background. His art practice is strongly expressed through his life experience as a neurodiscordant individual. His art is a reaction to the massifying and dehumanizing power of capitalism and aims to reframe everyday objects into an anti-colonial and anti-fascist struggle. Belote makes installations based on recycling that expose the semiological unfolding of capitalist oppression, performances that politicize the imaginary world of his observations, and mysterious and disturbing photographs.

kimura byol lemoine is a feminist conceptual artist in multimedia (video, pop art calligraphy, writing and collaborations) who through their experiences undeniably questions gender binarity, the perception of gender and racial identities, linguistics in its voluntary or involuntary "loss" through translation, and bodies as commercial objects. By giving voice and visibility to minorities, the archiving of narratives is a way of restoring the credibility of a non-eurocentric memory about identities.