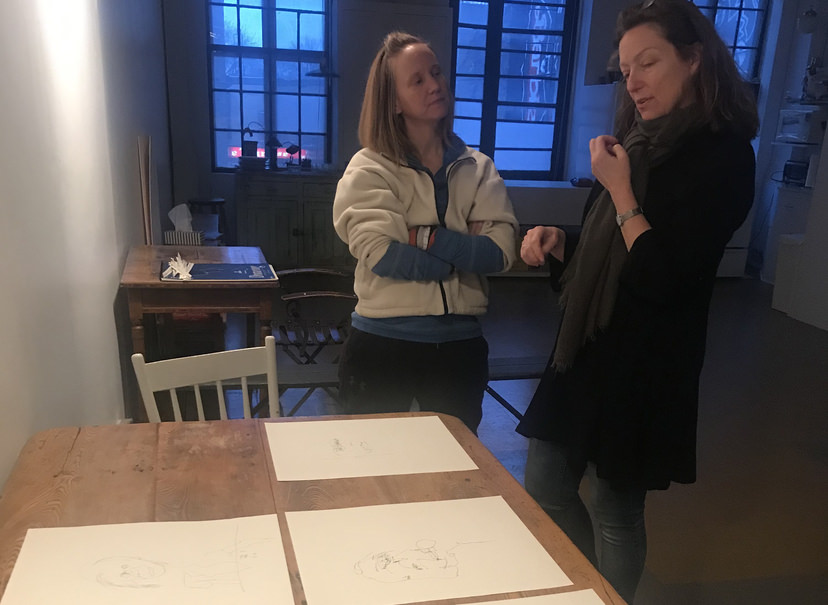 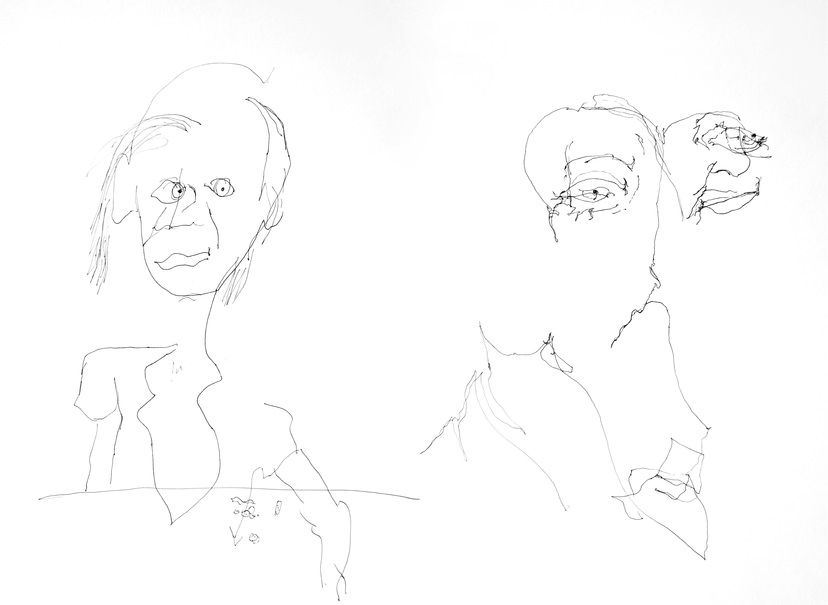 Engendering bio-graphisms, or: know/witnessing one's own (hi)story to create other ones (a text on Jennifer Alleyn and Raphaëlle de Groot)

Engendering bio-graphisms, or: know/witnessing one's own (hi)story to create other ones.

In another space-time, one that is not determined by production nor defined by the limits of individualistic autonomy, a studio/workshop is being born.

This multipurpose space has its own energy, a creative volition previously established in the set and atmosphere of Impetus, Jennifer Alleyn's last feature film. It emerges as one walks into it, a strange and powerful sense of stimulation and peacefulness, hardly described but ever so easily felt. An unstable stability. From the moment this space opens its doors to Raphaëlle de Groot, a new series of jostling figures is generated. Not as a permanent subversion - the earthquake lasts merely a few seconds. As soon as the two artists begin working together, the ceiling of the workspace, like a seesaw, pauses a moment to settle into equilibrium. Yes – it is one very interesting confrontation. After the initial big-bang, their unified breath, now twice as deep, start filling up the room, once inhabited only by individuals. From now on, this space will be mutually defined.


When all three of us meet up after their private morning session, I begin to understand their main creation tool: conversation. It is through exchange that Raphaëlle explains me, in great detail, Jennifer's art and work, which, it turns out, leads to a fascinating revelation that both artists did not know each other beforehand. The huge desire to tune into each other, to learn from one another and get comfortable has been the propeller of their creative impulses. To discover and explore each other. To take advantage of this opportunity of encounter, nourished by a mutual respect and many similarities, revealed to the artists little by little at every meeting. The essence of these deeply-rooted common interests is the endless questioning of the origins of creative impulse: what moves us to do art?

For Raphaëlle and Jennifer, this mutual encounter is felt as a rare opportunity to offer one another a self-reflexive break between projects, mutating this hiatus into a shared retreat. It's almost as if one held a mirror in front of the other, while remaining present to welcome the reactions that occur, and thereafter, create with them. Confinement is then broken: it is there that the slow and progressive creation of this multiplied workshop lies.

The emphasis on the workshop space is not fortuitous: materiality and space are core themes in the work of both artists. Raphaëlle's life is balanced between Quebec, Brazil and Italy. Their first encounters, as a duo, were thus mediated by the physical distance that lied between them. Their first exchanges were of pictures of their immediate surroundings, in which they evolve separately. This shattered space, as a condition for their meeting, had them realize that in this shared space-time where their paths cross, their goal is not to achieve any sort of long-distance production. The little assignments they tried to give each other, like sharing readings, e-mails and drawings, were felt to be unsatisfying. Lacking meaning, sense. They felt like they were creating for its own purpose, obeying a set of rules that was added to their daily routines. No – this creative pile-up had to happen in real-life, through physical proximity, dialogue, gazing into one another, sharing words and memories.


– After all – wondered Raphaëlle – when do we ever allow ourselves to talk this way, limitlessly?

And yet these pauses prove themselves necessary for the two artists to respect the essence of the commitment they both made, early in their career: to preserve their creative freedom at all costs. In the harmonious syntony of their creative processes, some essential questions rose to the surface:

What binds creative freedom? How does one feed into it, exert it, while maintaining open lines on gestating work, not fixing it too quickly and avoiding to fall back into familiar or expected paths?

With exploration in mind, each allowed herself to experiment gestures which were unfamiliar to her but foundational to the other's practice.

Sitting opposite Jennifer, Raphaëlle took up to her old work assistant again – the pencil – and started drawing her partner's face without looking the paper sheet, using the famous blind-drawing technique. The pencil follows the movement of the eyes, without losing sight of what it is aiming to represent. Jennifer also drew Raphaëlle's portrait in a similar fashion. Other activities like these have flowed from inspirations such as exercises in neutrality which Jennifer used to do during her film studies degree. For one minute, they both proceeded to film one another, as they were bearing their most neutral expression, simultaneously writing arising feelings and thoughts about each other.

The most crucial aspect of this turn towards the origin of their creative motivations is the acknowledging of the fundamental importance that each phase of their life has had in the developing of their art practice. Realizing that what they are doing is the result of the story they bare. From this gathering of actualized and potential forces stemmed the desire to explore together the influence of their respective biographies on creative work. Because, as both are discovering together, biography, as one's life story, is a porous trajectory written by and through artistic creation. In other words, they are bio-gaphisms.

In Jennifer and Raphaëlle's experience, to live is to create and only through creating can they live.

The rich flow of their dialogue has guided the project towards notions of portrait and self-portrait as Jennifer and Raphaëlle are revisiting all that they have accomplished to get here. Indeed this work is the workshop itself as a relatively closed space, free of the outside world's rhythms and expectations, enabling a return to the self and that which truly matters. Their eagerness for sharing and time is gradually satisfied in a self fulfillment in which the other is an essential witness. This otherness is so vital that the artists are ready to bring other people in to experiment it.

In a near future, one whose exact date cannot be established at this moment, Jennifer and Raphaëlle will open the doors to what Jennifer describes as a « state of things, while they are not entirely clarified or defined. An access to questioning and gestation from which originates the creative act. » After what is anticipated to be a whole week of daily emulation between both artists, their shared workshop will be opened to the public for one day. This invitation is an opportunity to join the intimate and adaptable conversation the two artists have drawn out during their year long process of research involving experiment, activities and exercises that have solidified their bond.

The intention with this rendez-vous, suffused with traces of the duologic paths Jennifer and Raphaëlle have taken, is not to offer a simple exhibition of what they have created together, but to allow encounters between them and others. It is faith in the possibilities emanating from the testimony of the time they have spent together: visitors will be also invited to take that time with(in) themselves. This way they might discover vital aspects of themselves that they might have forgotten. Or, more simply, they might spend a moment with themselves, stepping out of the racing world surrounding them, while benefiting from a time spent with others. At last, this might be an opportunity to envision how confrontation with others can have effects on one's perception of self.

After all, it is through echo that Jennifer and Raphaëlle were able to hear each other's deepest breaths.