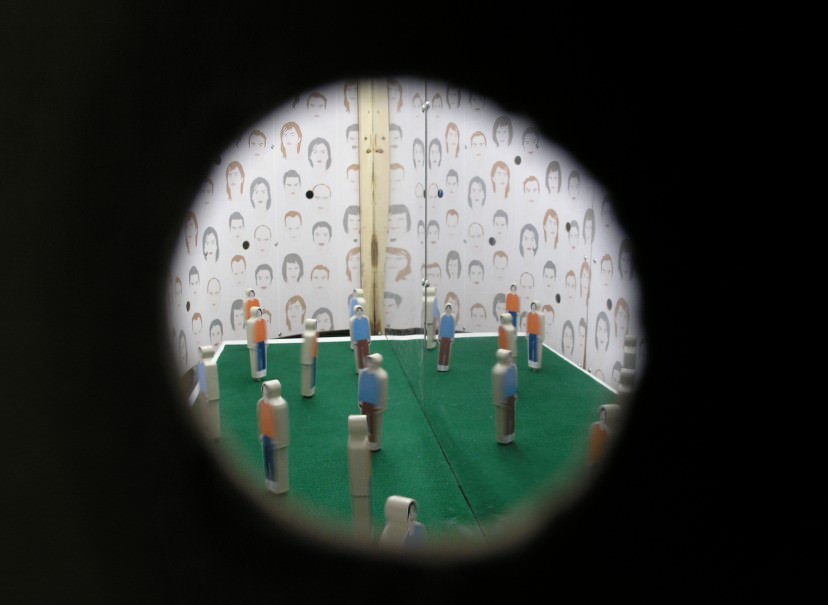 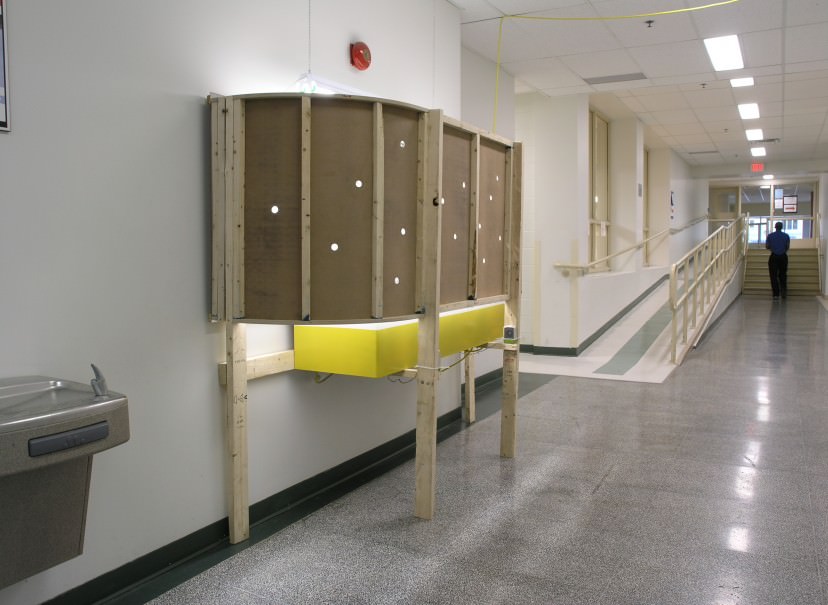 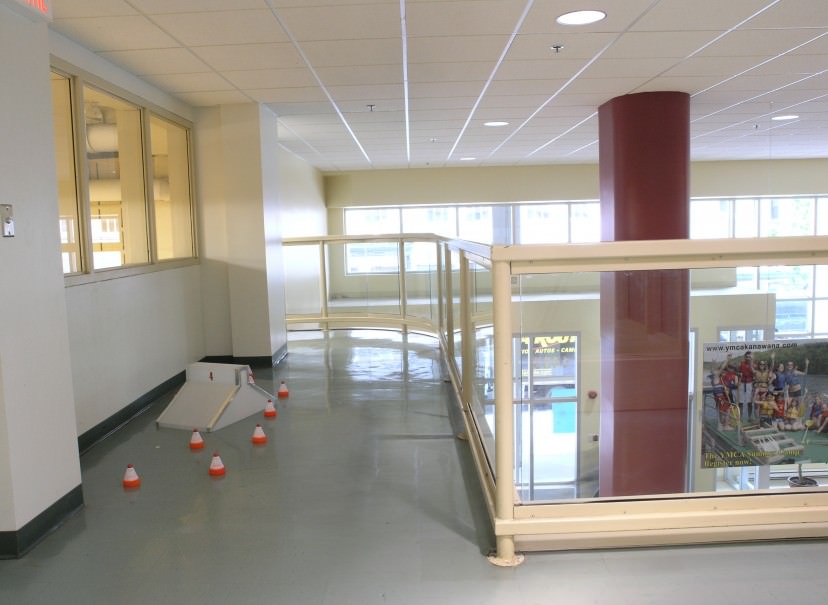 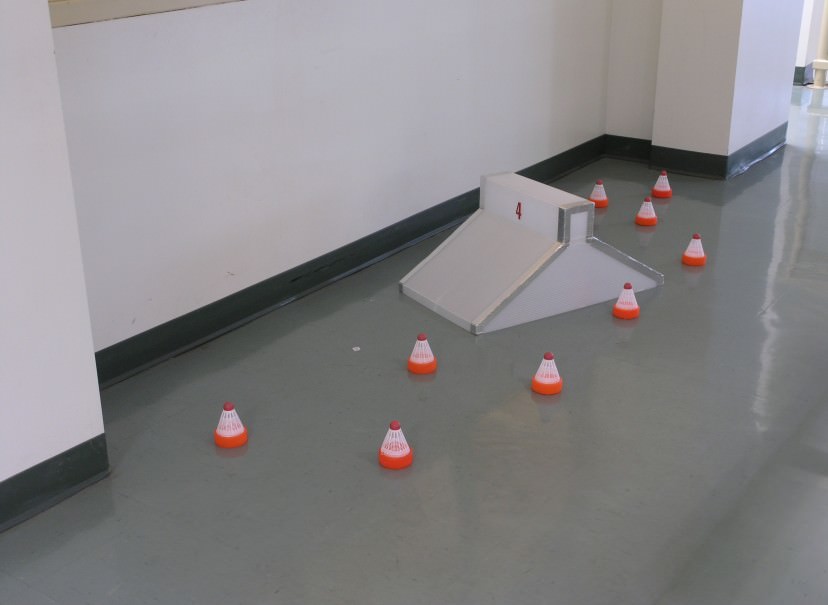 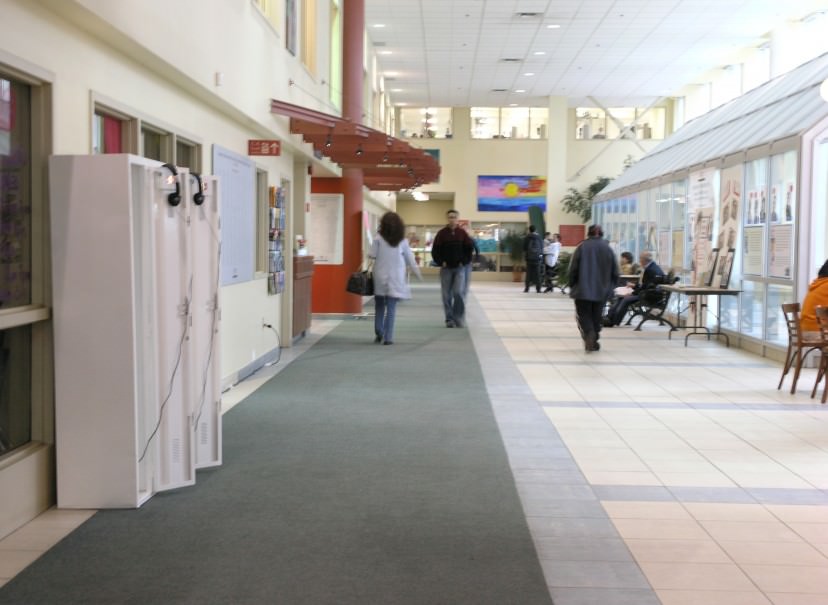 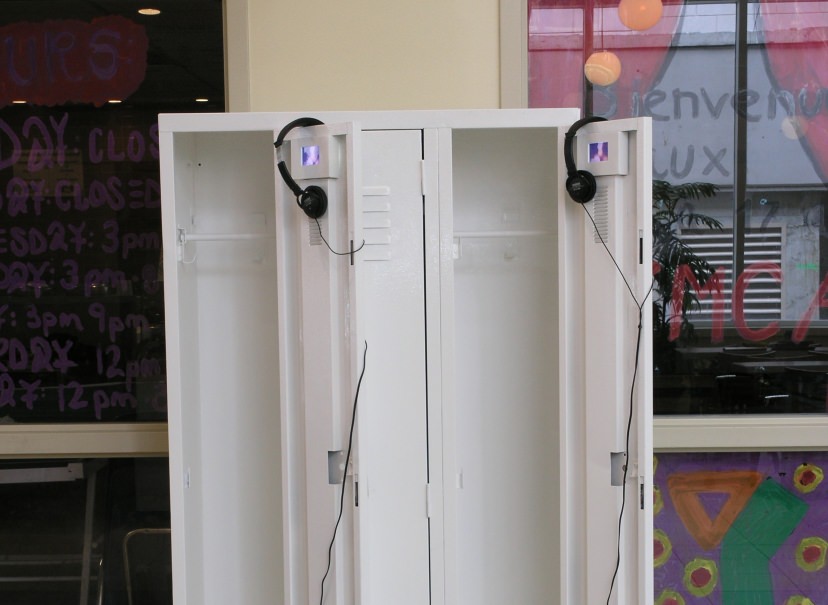 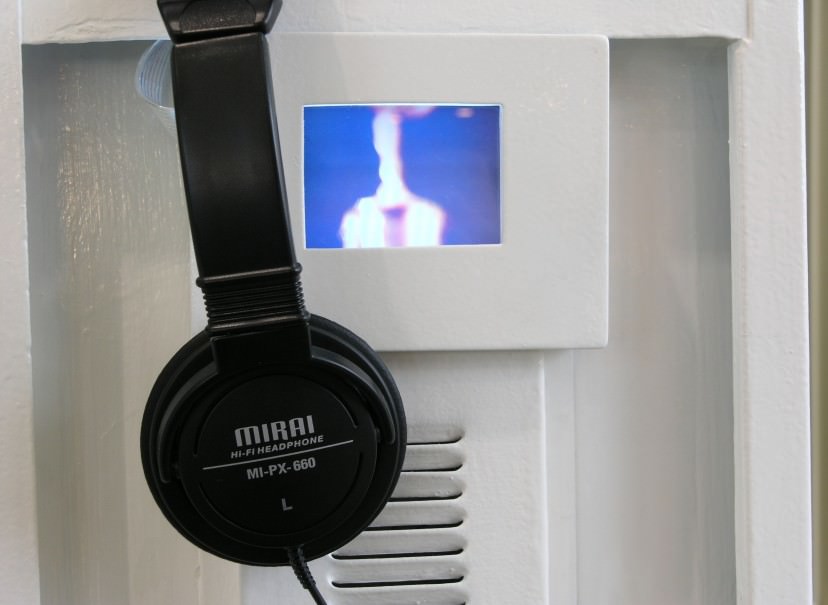 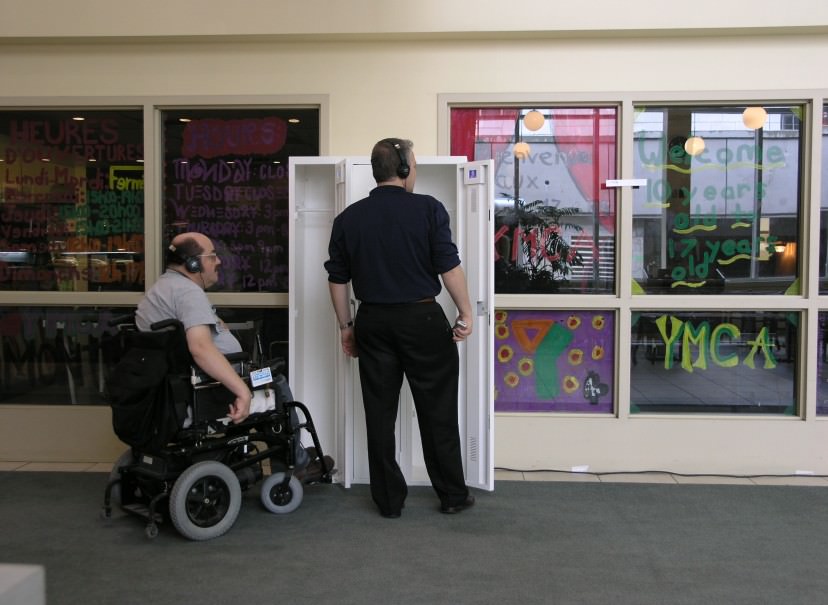 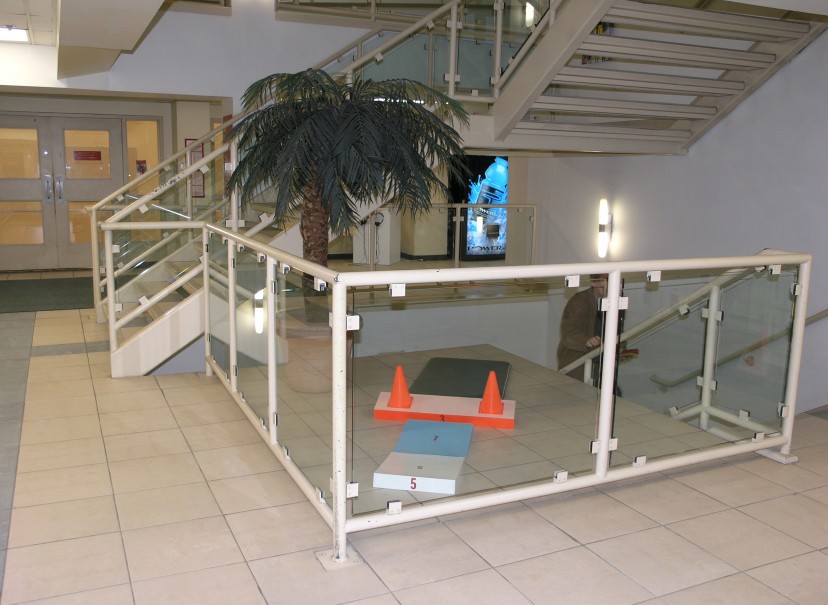 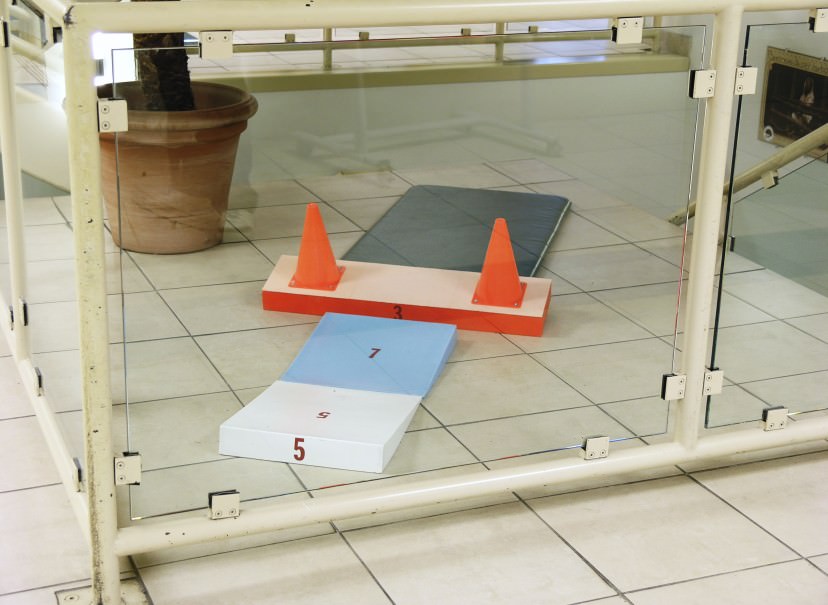 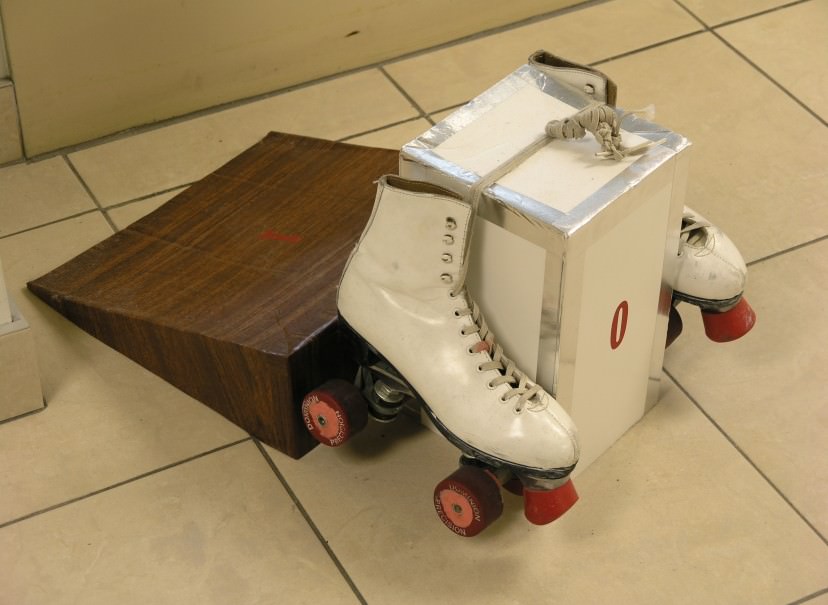 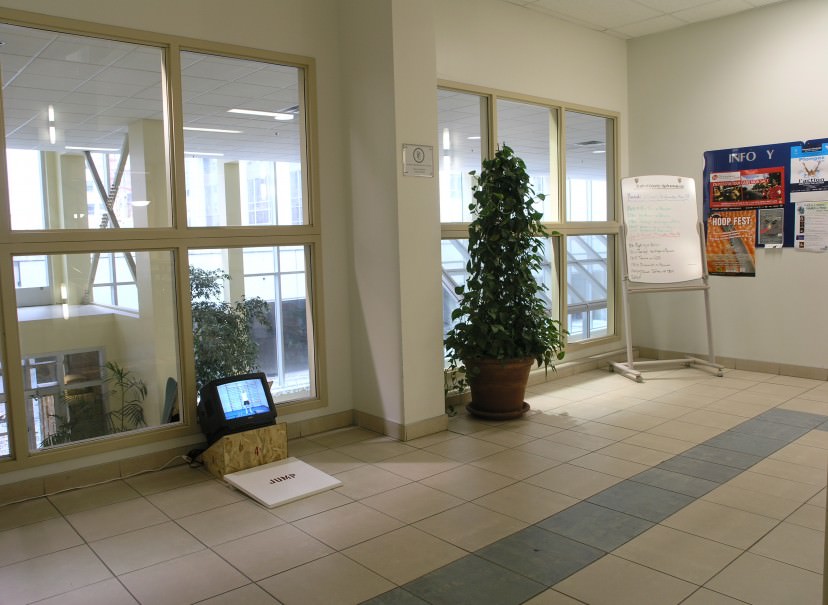 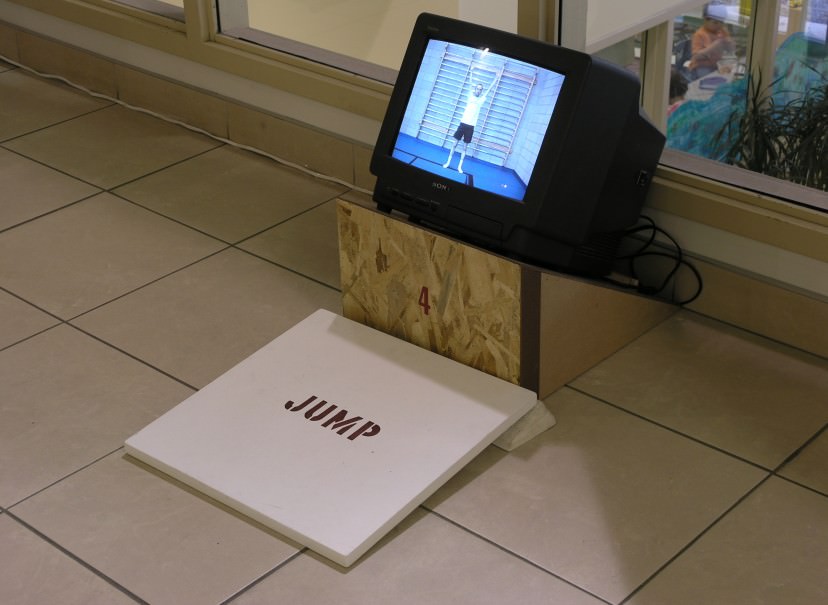 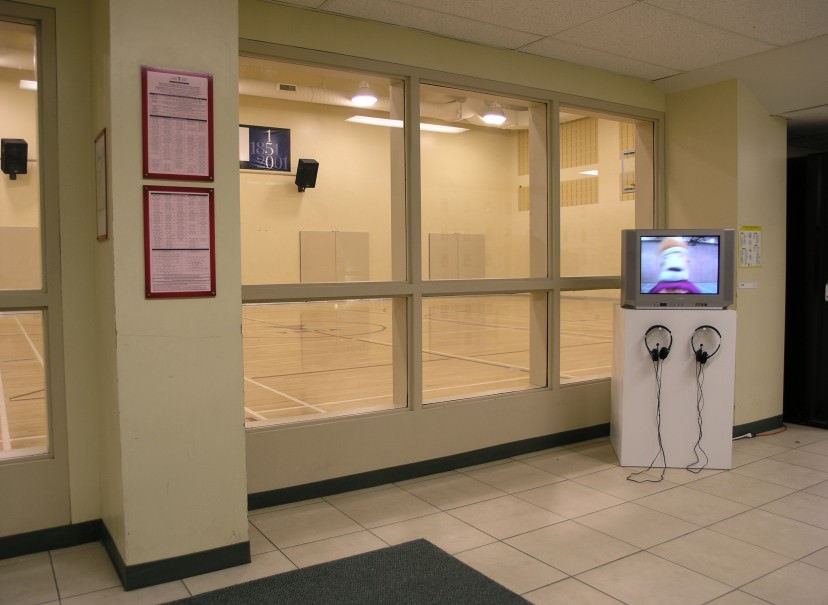 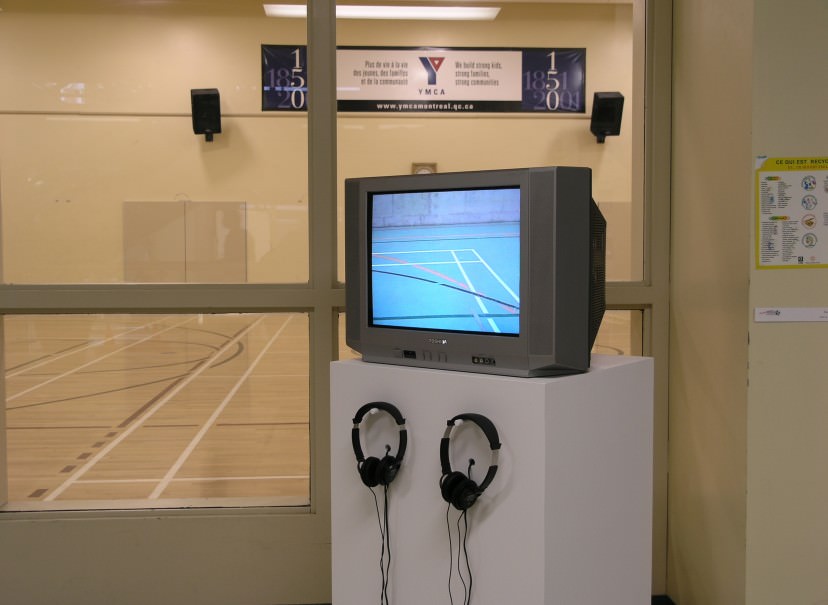 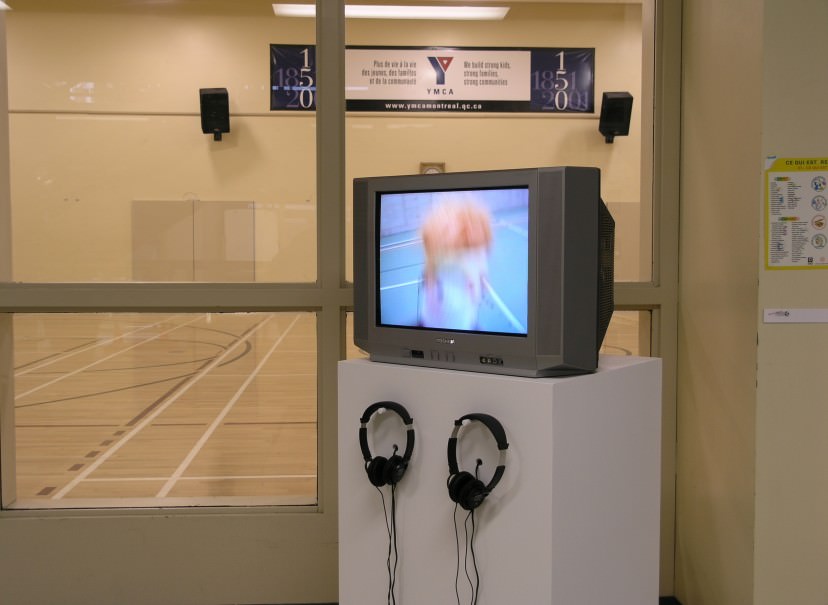 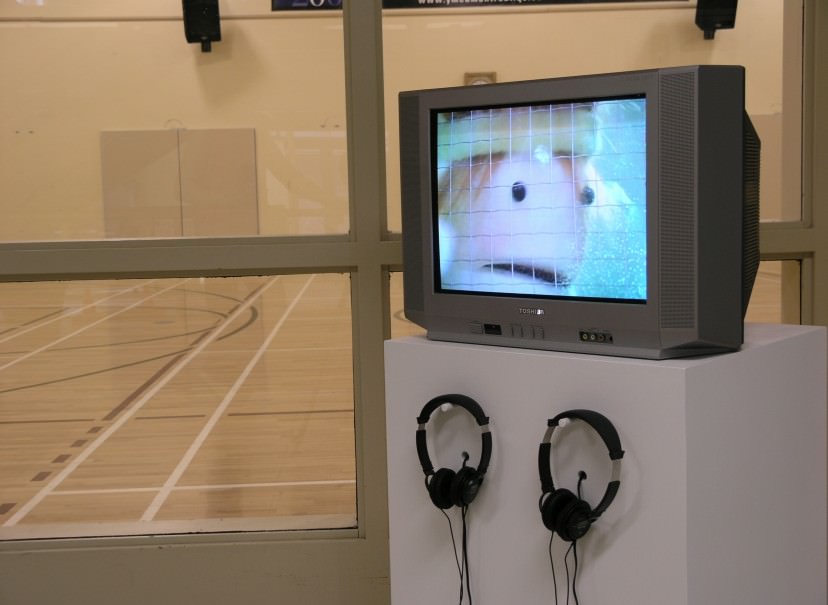 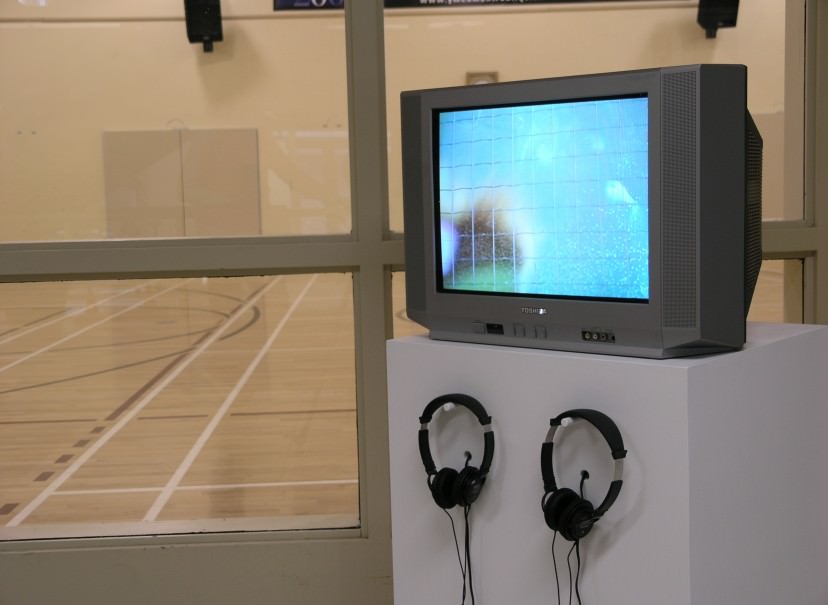 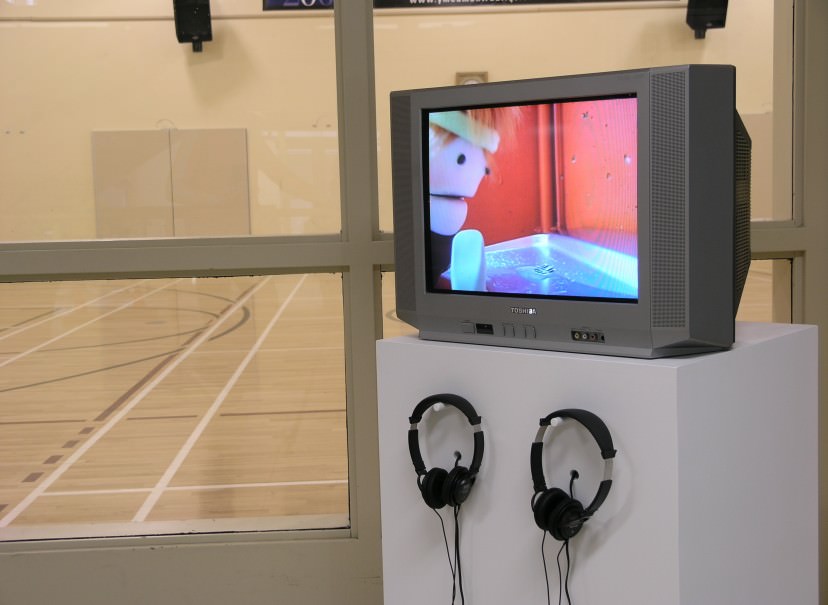 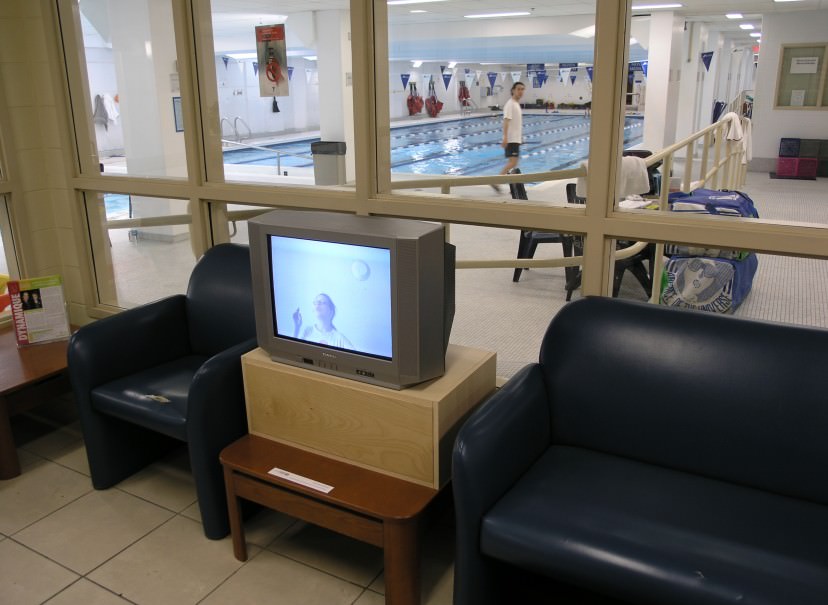 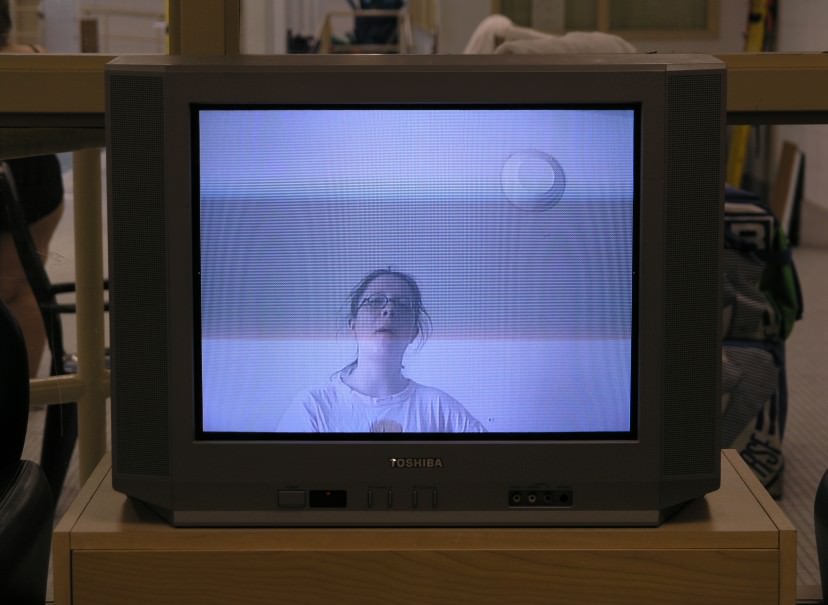 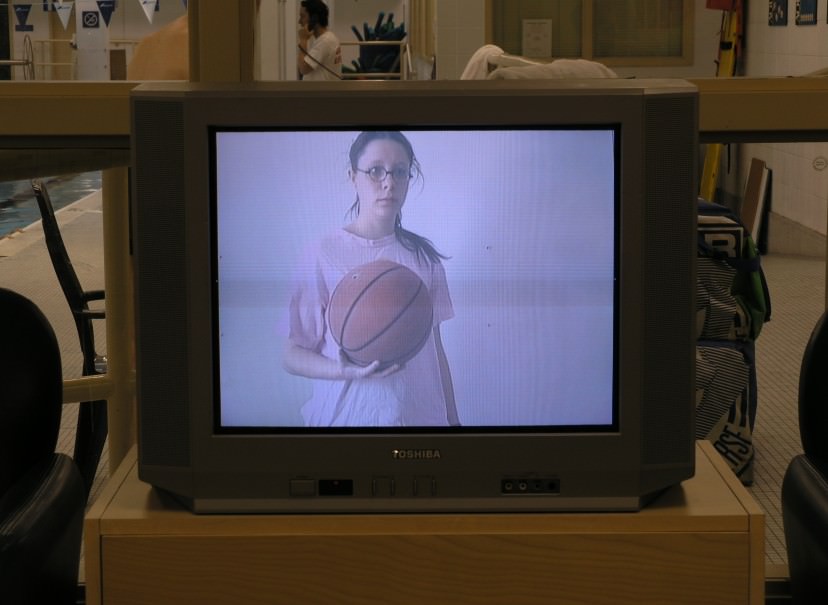 Multidisciplinary Exhibition at the YMCA Centre-Ville

As part of the YMCA Centre-Ville activity and location, Expo-sport is a collective exhibition featuring artists Belinda Campbell, Manuelle Gauthier, Mathieu Latulippe, Frédéric Lavoie, Martin Lord and Zipertatou. By integrating and presenting artistic proposals in a sporting context, these artists explore the possible encounter between the world of sport and that of art. Inevitably, a set of interpretations exists between the fields and codes of art and those referring more or less to various facets of the sport world. Thus, the works may appear unusual for the users of the sports center, while, for the visitors of the exhibition, the place and its function can constitute a singular context of presentation.

Belinda Campbell (Montréal) is in the first year of a Master's degree in Visual and Media Arts at UQÀM. She has already presented her work in various exhibitions and at collective events, including at the Optica Gallery (2004). She is interested in self-portrait video and sound using the distanciation inside a playful, ironic and poetic staging. The result: a self-portrait that is only escaping from itself. In 2005, she will exhibit at AxeNéo7 (Gatineau) and in 2006 at L'Œil de Poisson (Quebec).

Les multiples positionnements sentis de la sportification (monoband video). "Sportification" is the science that summarizes sport in its essence: meditation of energy in space through variable downtimes where the positioning of the sporting object is studied with the use of sensitive parameters for report on the change in his/her condition. With the video, I struggled to identify this science that stay very obscure. I awkwardly overwhelmed the subject by being too talkative; all this has only served to ridiculize me and, by the same movement, to completely miss the subject that fascinated me so much. The multiple positions felt of the sportification is a sporting failure: the effort led to want to illustrate what is beyond me will lead me, in a next season, to start again. I am motivated.

Manuelle Gauthier (Montréal) dedicate herself to video, installation and painting. Like the do-it-yourselfer who works with « résidus et des moyens du bord qu’il convertis à d’autres fins », Manuelle develops a personal mythology and constructs fragmented narratives within which she tries to emerge a tension, a dramatic charge. She recently interested herself in the documentary form because the "testimony" of the people she interviews is a rich material for her crafts. In 2005, she will complete a Master's degree in Visual and Media Arts at UQÀM.

Se tenir dans sa case (installation). The locker can be one of the only places of privacy possible in a high school. In the gymnasium, one changes oneself, half hidden behind the thin door. We wander there at break time when we have nothing better to do. We stick the photos of our idols, a mirror maybe...

Here, a segment of three lockers is transformed into a listening and viewing station. A video tape reveals the perceptions and experiences of a dozen artists regarding sport. The very subjective cut offers an inordinately tragic testimony that highlights particular clichés conveyed by popular cinema for adolescents.

Then begins to reflect on the competitive aspect of sport, the factors that forge identity in adolescence, the importance of image in relationships with others, the indelible marks caused by rejection, the place of sport as a laboratory where we experience the balance of power in society, the way we teach sport in our schools, etc.

Mathieu Latulippe (Montréal) is currently pursuing a Bachelor's degree in Visual and Media Arts at UQÀM. In his artistic practice, he mainly seeks, through various media, to question "common sense", and certain social issues, by creating contrasts between the reality of the work, or the situation, and what we could " normally " want from it. His work has been seen at the Événement Interuniversitaire de Création Vidéo (2004), at the Festival des Arts indisciplinés des Régions de l’Est (2004) and FIFA (2005). He will do an installation at CIRCA Gallery in 2006.

Toujours plus haut (installation) is composed of various elements that form a course through different jumps. The spectator, however, is confronted rather quickly with the nonsense of the proposed elements and the impossibility of really experiencing them. Instead, and in a place of sport, the spectator becomes rather forced to inactivity and contemplation.

After graduating from the Université de Montréal with a degree in anthropology in 1999, Frédéric Lavoie (Montreal) is works on video, audio art, installation and photography. His videos has been shown at many festivals in Montreal and abroad. His research focuses on the individual's ability to invent ways of being in the inhabited space. He is currently pursuing a Master's degree in Media Arts at UQÀM. In 2006, Skol Artist-run center will dedicate a solo to him.

TRI - (installation). Three-part installation that questions the viewer's point of view through sound, image and object.

Born in Sainte-Thérèse, Martin Lord (Montreal) is currently completing a Bachelor's degree in Visual and Media Arts at UQÀM, following a period of study at the Strasbourg School of Decorative Arts. He has participated in several events and group exhibitions in Montreal, as well as in Strasbourg. His approach develops around the image of the body and the individual by his contribution to the world, where the notions of alienation, misappropriation, fragmentation and lack are omnipresent. He considers himself a non-specialist worker.

La partie (installation) start on the opposition between spectator/player opposition to consider the difference of reality of the two groups involved, that is, distance and direct involvement. This project portrays a caricature of a disproportionate sports game. It is in a clash aesthetic that La partie highlights socio-emotional metaphors related to the role of sport in our societies.