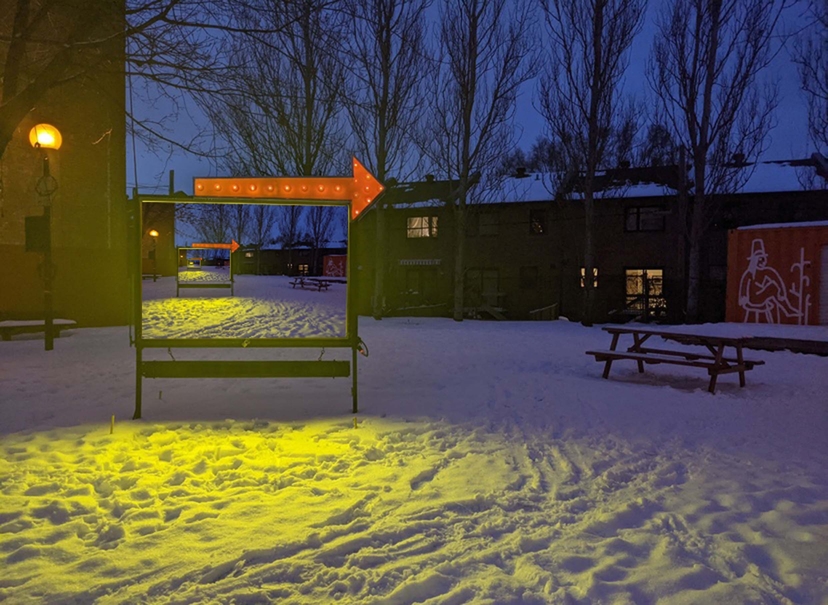 FROM ONE SCRIPT TO ANOTHER

Translate, interpret and engage people and territories in dialogue

DARE-DARE forges ahead with its urban poetry/writing project. Borrowing the brief form of the tagline, haiku or tweet, these short sentences, aphorisms, poems or questions are displayed in a lightbox for a week (located in Sainte-Cunégonde Park / Little Burgundy neighbourhood). The texts are visible, day and night, to people who pass near LA HALTE (documentation centre).

This week, we begin the 2022-2023 programming of the Écritures Publiques component, and we are very pleased to present you with the participating projects.

Bélinda Bélice is a poet, writer and musician based in Montréal/Tiohtiá:ke. She holds a master's degree in French-language literature (research-creation) from the Université de Montréal. She is interested in staging the female voice, and women's bodies, especially those of black women. Active on the Quebec music scene, she forms the soul/world music duo (Haiti), Bel and Quinn, with her sister and jazz guitarist, Christina Bélice.

She explores the corporeal dimension of the voice by playing with the language registers and the form of the text. I like the characters' speech to be one with the story. Writing and poetry allow me to exist, to fight. "Poetry is what is said, is", as Gaston Miron says. It is like looking at the possibility of being reborn. By consciously exposing women's bodies and voices in my writing, I give them back the space they deserve.

Her poetic project is about parading the family stories that we inherit despite ourselves, and all the other ones that we get to pick up during our lives. By carrying out this work of reweaving, the body begins to wander wherever it wants, and the voice can seek to inhabit itself. It is to burn all that assails us, to say since one dies. Through the blending of French and Haitian Creole, these poems attempt to deconstruct the family heritage that one may or may not accept, that is part of oneself, to abandon beliefs that have never been questioned before. It is a new path to take, to go beyond one's home and decide not to return.

Club Ami is a mental health day centre founded in Montreal in 1983. It is located on the 5th floor overlooking the Côte-des-Neiges skyline. It is a place where people, most of whom are psychiatrically ill, struggle with difficult and persistent psychopathological problems. Although everyone can find support and active listening at the Club, the goal is not so much to provide services as to create a small community around the simple fact of being together. We meet here to chat, play cards, dominoes and explore in a minor but continuous way all kinds of creative practices: drawing, collage, writing, radio, film, photography.

Club Ami, the author who applies here, is a composite creature erected like a sculpture of the Facteur Cheval, from the assembly of all sorts of visions, languages, voices, psychoses, narratives, experiences, geographies that are the worlds of its members. It is sometimes haggard, pierced by the absence of those who are hospitalized or who are too ill to come. It is also full of noise, of desire, always alive. It whispers or shouts, it claims or invokes. There is no translation or analysis, and sometimes there's not even dialogue, but flows tuned here and there, or addressed with force.

The words clash. They are mixtures of dazzling truths and bursts of delirium. They put on the same level the story and the History of human and non-human figures, of stars and abysses, of cabalistic signs, of daily and spiritual gestures that animate us. They form black diamonds, the poetic jewels of Club Ami. Club Ami is not interested in "mental health", that objectified expression exchanged in the circuits of the good world of moms and dads sitting in the living room.  Club Ami crosses states, changes shape, looks for shapes, and intends to offer you during these few months the traces of these mutations, these escapes and these rides.

Born in Prague in 1984, Martina Chumova grew up (mostly) in Quebec. Interested in many disparate things, she studied anthropology, German studies, and History before working in publishing. She has published short stories in magazines and collectives; her first novel, “Boîtes d'allumettes” (Cheval d'août, 2020) deals with immigration and memory by focusing on the detail, the oblique, the textures of everyday experiences. She lives in Montreal.

Everyone has been struck at one time or another by the arbitrariness of the categories that make up many official forms, but immigration experiences are perhaps particularly sensitizing to this. Chumova would like to examine this feeling of arbitrariness - of being confronted with somewhat absurd classifications that cannot be taken lightly because the "right answers" can determine the course of one's life. Her poems and writings evoke certain insecurity of the uprooted individual, who risks falling into the cracks between the categories that would allow them to be "in order". The thread linking the fifteen formulas: shifts and intrusions, both semantic and formal. She thus seeks to suggest the dissonance (slight or major) that emerges when real experience -multiform, dense, ambiguous- collides with the bureaucratic structures that govern who is in order and who is not, who has the right to stay where, who is a stranger and who belongs to us.

Geneviève Thibault's creative projects question, through a reflection on inhabitation, the [so-called] boundaries between public and private space, identity and otherness, the intimate territory and the social fabric, as well as the forces at work in the act of inhabiting. These preoccupations converging towards the cohabitation of territory have led her to pursue Aboriginal studies, study ethnology, and then the practice of art. Geneviève Thibault uses photography, video, installation and writing to give form to her questions in different spaces, public or private, real or virtual. Thibault teaches photography at the Cégep de Matane while pursuing a master's degree in art practice at UQO. She lives 630 kilometres east of Montreal.

Her practice unfolds in contact with otherness, in the domestic environments that Geneviève Thibault visits unexpectedly. At least, that was the case until sanitary concerns isolated us all in our own space. This new reality has led her on introspective paths that she digs through her writing. She now reflects on the interior from the inside. On the body and on the home. Not from a perspective of withdrawal, but rather in a circulatory movement between the self and its context.

I turned 40 years old during the confinement. My motherhood is changing. The one that connects me to my children and the one that connects me to my mother. My son is about to leave home. My mother is losing her memory. In her kitchen, small yellow square papers remind her of what she needs to remember. I read these fragments of her daily life each time I visit. Like her, I rely on these words that translate her fear of forgetting. We meet in this place of daily writing. Once spread out and exposed to the eyes, do personal words (ailments) become more real, less disposable, universal, and soothing? What happens when the interior is exposed?